Toxic smog over India’s capital is due to a drop in temperature and wind speed, and a spike in the burning of crop waste in farmlands 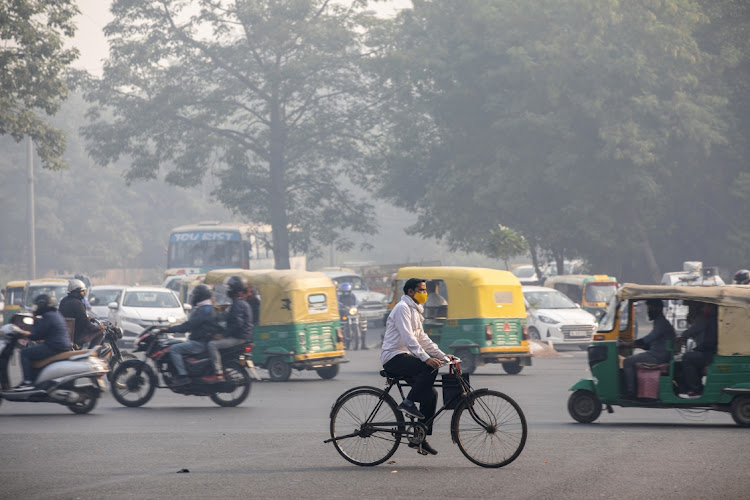 A cyclist wearing a protective mask rides past vehicles at an intersection shrouded in smog in New Delhi, India, on November 9 2021. Picture: BLOOMBERG/PRASHANTH VISHWANATHAN

New Delhi — New Delhi’s air quality plummeted again on Friday, and a thick haze of toxic smog hung over India’s capital due to a drop in temperature and wind speed, and a spike in the burning of crop waste in surrounding farmlands.

The haze reduced visibility and the Air Quality Index (AQI) hit 461 on a scale of 500, according to the federal pollution control board. This level of pollution means the air will affect healthy people and seriously impact those with existing diseases.

PM2.5 is small enough to travel deep into the lungs, enter the bloodstream and can cause severe respiratory diseases, including lung cancer.

“This is becoming a nightmare,” said Gufran Beig, founder project director of air quality and weather monitor SAFAR that falls under the ministry of earth science.

“Fire counts are in the range of 3,000-5,000 and not declining,” Beig told Reuters, referring to crop stubble fires in the regions around the capital.

He said current severe conditions may ease by Saturday, but air quality would remain “very poor” until November 17.

India’s efforts to reduce crop-waste burning, a major source of air pollution during winter, by spending billions of rupees over the past four years have done little to avert a sharp deterioration in air quality.

Delhi, often ranked the world’s most polluted capital, faces extremely bad air in winter due to the crop stubble burning, emissions from transport, coal-fired plants outside the city and other industrial emissions, open garbage burning and dust.

Residents of Delhi endured this year’s worst air on November 5, a day after revellers burnt firecrackers during the Diwali festival, as AQI levels surged to 463 on a scale of 500.

Vehicular emissions contributed more than half of Delhi’s particulate pollution between October 24-November 8, the Centre for Science and Environment think-tank said in its report published on Thursday.

Toxic smog at worst in years in Delhi after Diwali

The PM2.5 reading on Friday averaged 706 micrograms, while the WHO deems anything above an annual average of 5 micrograms unsafe
World
7 months ago

India’s Congress party stands up for women in Uttar Pradesh

Uttar Pradesh, which goes to the polls early next year, has the highest number of gender crimes in the country
World
7 months ago

Air quality in Indian capital improves substantially in October thanks to late monsoon, but the reprieve could prove temporary
World
7 months ago
Next Article