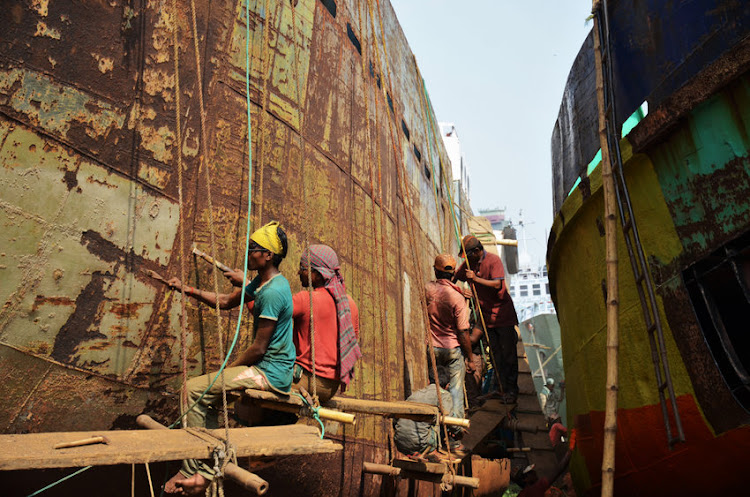 Chattogram — When Samrat Hossain first started cutting up old ships weighing thousands of tonnes in a southeast Bangladesh ship-breaking yard a decade ago, all he would wear was a cap or a helmet.

But these days, the 27-year-old spends nearly an hour each day before work putting on his protective gear, which includes special masks, gloves, boots and a suit.

“A lot has changed in the last 10 years. Before, personal protective equipment was not a factor. But today we are not allowed to work without it,” said Hossain, an employee of PHP Ship Breaking and Recycling Industries in the coastal city of Chattogram.

It is the Bangladesh’s only yard — of a total of about 80 — that complies with international health, safety and environmental rules for the risky occupation.

“It's not the same everywhere,” said Hossain. “Some workers from other yards told me they buy their own gloves.”

The industry in Bangladesh is evolving to come in line with new regulations, officials say.

The government, through a parliamentary act in 2018, ordered yard-owners to clean up their practices by 2023 and implement standards laid down in the Hong Kong International Convention for the Safe and Environmentally Sound Recycling of Ships. That pact, adopted in 2009 and ratified by 17 nations so far, aims to improve worker safety and environmental protection, but has yet to come into force globally.

The changes will include training workers on safety, preventing emissions of ozone-depleting substances and building storage for toxic waste from ships like asbestos and lead.

Bangladesh is one of the world’s top locations for dismantling end-of-life ships, with at least 144 broken down on its beaches in 2020, or about one in every five worldwide, according to Ship-breaking Platform, a global coalition that campaigns for clean, safe ship recycling. Most of the others ended up in India, Pakistan and Turkey.

The sector has been criticised for failing to prevent workers' deaths — caused by gas explosions, employees falling from a height or being hit by ship parts — and for damaging the environment through oil spills and spreading harmful waste.

At least 11 workers have died in Bangladesh’s ship-breaking sector so far this year, according to Young Power in Social Action, a local non-profit that focuses on shipyards.

In Bangladesh, only PHP, which started work to reform its practices back in 2014, has so far met the Hong Kong pact’s goals.

Though most of the country’s ship-breaking yards have now submitted improvement plans, government and NGO officials expect just five or so to comply with the convention by next year. They attribute the slow progress to the investment needed to update the yards’ operations, as well as lockdowns due to the Covid-19 pandemic over the last year.

“A good number of yard-owners don’t have the financial capacity,” said Mizanur Rahman, an official at Bangladesh’s ministry of industries. “We are working on a way to facilitate them with soft loans,” he said.

Many yards lack proper waste storage systems, due to a lack of trained people and investment, he noted. But he is confident all yards will comply by the time the convention comes into force, which could happen in 2025 provided Bangladesh ratifies it by 2023.

The convention will take effect when it has been approved by countries that break 40% of the world’s ships by tonnage, a figure that stands close to 30%. Once it comes into force, ships sent for recycling must carry an inventory of hazardous materials contained in their parts. It will be prohibited to use new parts made using these toxic substances.

Bangladesh’s PHP Ship Breaking and Recycling Industries, which has been certified by international auditing groups as meeting the convention's regulations, has spent at least $8m since 2014 on developing its methods, said its MD Zahirul Islam.

For example, it now uses cranes to carry blocks — cut from ships moored on the tidal mudflats — directly to an impermeable concrete platform where the rest of the cutting is done to avoid spillage onto the beach. “Traditionally every block would be dropped on the beach and then dragged by workers,” said Islam.

PHP’s yard also has a sealed negative pressure unit that removes asbestos — which can cause cancer — from ship parts and stops the mineral escaping into the air. It has so far collected 32 kinds of waste, including ozone-depleting substances, paint chips and glass wool.

For now, shipyards are expected to store waste temporarily until the government creates a central storage area and disposal system for collection and recycling, due to be ready by 2024.

Until then, PHP is planning to pay vendors to remove waste from its yard. It recently started exporting asbestos to Germany to be used as landfill and is in talks to supply glass wool to a cement firm.

Bangladesh already gets most of its steel from dismantled ships instead of extracting it from iron-ore through a process that produces high carbon emissions.

The government will also monitor what happens to substances from ship-breaking that deplete the Earth’s protective ozone layer, such as hydrofluorocarbons used in refrigeration, which are also greenhouse gases, said Rahman.

The upgrades at PHP have come at a cost, though. The mechanisation of the yard saw Islam’s workforce decrease from about 3,000 people to 300.

In the past, ship parts were carried by groups of about 50 people on their backs but the arrival of magnetic cranes in many yards has changed that, said yard boss Islam.

Rahman from the industry ministry believes the sector must accept such “technological changes”. “We don’t want these jobs to remain because this is not decent work and there is an occupational risk,” he said.

Workers who lose their jobs at shipyards mainly find employment at nearby steel mills, scrap shops or as daily labourers, a labour ministry official said.

For now, while the country's only convention-compliant yard paints a positive picture, the rest have a long way to go, said campaigners.

“The intention to improve is there but the progress is slow. The ship-breaking firms need international expertise to focus on safer cutting and asbestos removal,” said Ali Shahin, a Young Power in Social Action programme manager.

Ibrahim Khalil, 48, who was injured three months ago when a ship part he was cutting fell on his leg, has yet to get back to work. The owner of the non-compliant yard he works for provided him with initial treatment but abandoned him midway, he said.

“You can still see the bone in my leg. I was wearing protective boots, but that (block) still went through,” he said. “I need to be treated so that I can get back to work and feed my family. But the management keep giving excuses.”

Ruksana Akter, whose husband fell to his death at a shipyard five months ago, said the owners paid her just half the legally mandated compensation. “I had no choice but to accept whatever I got. I needed quick money for my two girls,” she said.

Abdullah Al Sakib, an official at Bangladesh's labour ministry, said the situation was improving and the government had filed legal cases against a number of yards that had not paid the minimum wage.

While many activists are sceptical the yards will meet the national deadline of 2023 to implement the new regulations, the government believes that, over time, rising pressure on owners will create a safer, more climate-friendly ship-breaking sector.

“The whole world is looking at Bangladesh,” said Rahman of the industry ministry. “Our ratification of the Hong Kong Convention will bring it into force and it will be a breakthrough.”

Surge in onion prices another slice of hardship for Indian consumers

Onions are a politically sensitive commodity, with price spikes contributing to more than one state government falling
World
8 months ago
Next Article