New panel is assigned the task of creating a virtuous cycle of growth and distribution, and creating a new post-Covid society 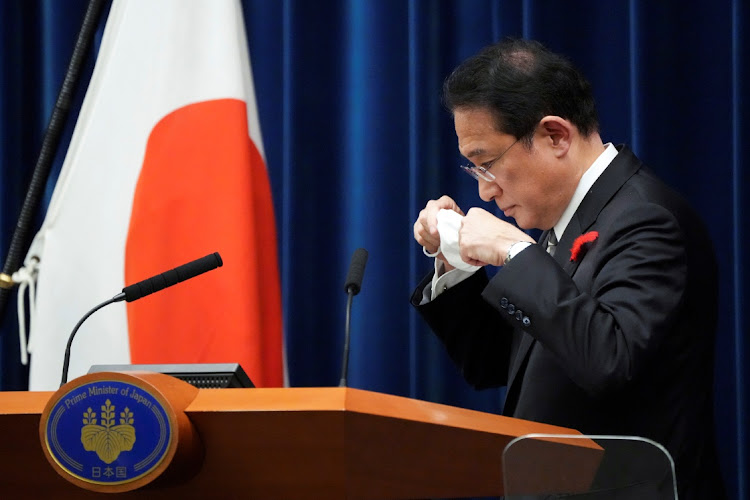 Japanese prime minister Fumio Kishida puts on his protective mask after speaking during a news conference at the prime minister's official residence in Tokyo, Japan, on October 14 2021. Picture: POOL via REUETERS/EUGENE HOSHIKO

Japan’s new Prime Minister Fumio Kishida came to office pledging to spread the fruits of economic growth more widely and narrow differences between the haves and have-nots. His advisory panel charged with developing a “new capitalism” looks unlikely to press for radical change.

While there’s one labour union leader among the 15 members of the panel unveiled on Friday, the bulk of those appointed are senior executives from large companies and the finance industry. The group includes seven women and it replaces a growth council that was only a quarter female.

The new panel is assigned the task of creating a virtuous cycle of growth and distribution, and creating a new post-Covid society, according to a Cabinet Office statement Friday.

By highlighting the importance of distributing the benefits of growth more fairly, Kishida is hitting on a theme he hopes will shore up support for the ruling party in a general election at the end of this month. The prime minister has vowed to shift away from neoliberal economic policies and said corporate profits need to be shared with workers and subcontractors, not just shareholders.

New panel members include Commons Asset Management chairperson Ken Shibusawa, who is the great-great grandson of a pioneer of Japanese capitalism who founded the country’s first bank and stock exchange. The panel will also be debating a revision of the requirement to disclose company earnings on a quarterly basis.

Crowd funding platform provider READYFOR’s CEO Haruka Mera is also a part of the panel. So is Yumiko Murakami, a general partner with MPower Partners Fund, a venture capital fund focused on ESG investments that she cofounded with former Goldman Sachs vice-chairperson Kathy Matsui. The first female leader of Japan’s federation of labour unions has also been appointed to the panel.

Chiu Kuo-cheng says, however, the country will defend itself ‘full on’ if necessary
World
10 months ago