Some say spikes and plunges is mainly due to trends in human activity, others say the phenomenon is seasonal 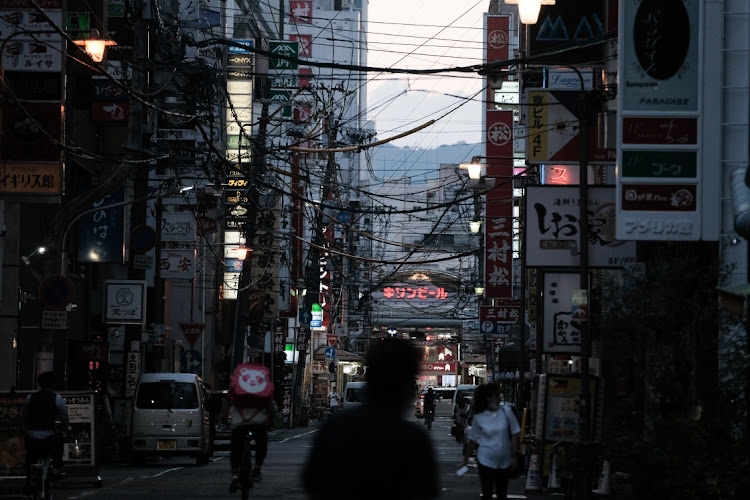 A street lined with bars and restaurants is shown in Hiroshima, Hiroshima Prefecture, Japan, in this August 29, 2021 file photo. Picture: BLOOMBERG/SOICHIRO KORIYAMAA

Tokyo — Japan’s Covid-19 case numbers have plummeted to the lowest in nearly a year just as other parts of Asia are struggling with surging infections, leaving health experts perplexed and raising concern of a winter rebound.

New daily cases in Tokyo dropped to 87 on Monday, the lowest tally since November 2, and from more than 5,000 a day in an August wave that hammered the capital’s medical infrastructure.

The pattern is the same across the country.

After a slow start, Japan has made rapid progress in its vaccination campaign and almost six months of emergency distancing restrictions have probably helped stem the spread of the virus. Nevertheless, the speed with which a wave of infections and hospitalisations fuelled by the highly infectious Delta variant has ebbed away has confounded the experts.

Kyoto University’s Hiroshi Nishiura is among those who believe the summer spike in cases and subsequent plunge were mainly due to trends in human activity.

Infectivity, as measured by the effective reproduction number, is correlated with holiday breaks, he said.

“During the holidays, we meet people whom we seldom meet up with, and moreover, there is a substantial chance to eat together in a face-to-face environment,” said Nishiura, a top infectious disease modeller advising the government.

Recent record cases in South Korea and Singapore may be connected to some midyear holidays, and a convergence of Asian and Western holidays at the end of the year could lead to a “nightmare”, he said.

But other experts say infection trends have less to do with travel and more to do with regular, seasonal trends.

Jason Tetro, a Canada-based infectious disease expert and author of The Germ Code said different age cohorts become “fuel” for the virus to perpetuate, depending on vaccination rates and prior infections, at different times.

“Without elimination of the virus, we will continue to see spikes until 85% of the population is immune to the dominant strain,” he said. “This is the only way to get out of these vicious cycles.”

A theory gaining ground is that Covid-19 and its variants tend to move in two-month cycles, though Tetro said the cycle is “more a factor of human nature than mother nature”.

Kenji Shibuya, the former director of the Institute for Population Health at King’s College, London, said he doubted that “the people’s flow” was driving the virus, as many government experts assert.

“It is primarily driven by seasonality, followed by vaccination and perhaps some viral characteristics which we do not know,” said Shibuya, who also directed municipal inoculations in northern Japan.

After a late start, Japan has vaccinated 61% of its population and the government was gearing up for booster shots to head off the breakthrough cases seen elsewhere in the world, Noriko Horiuchi, the new minister in charge of vaccines, said in her first press briefing since her appointment.

Whatever the cause of the lull, experts say time is of the essence to head off another resurgence.

“We only have a window of one month, so we should move fast to secure beds and ramp up vaccination,” Shibuya said.

Prime Minister Jacinda Ardern says a lockdown affecting 1.7-million people in Auckland will be scaled back in phases from Wednesday
World
3 weeks ago