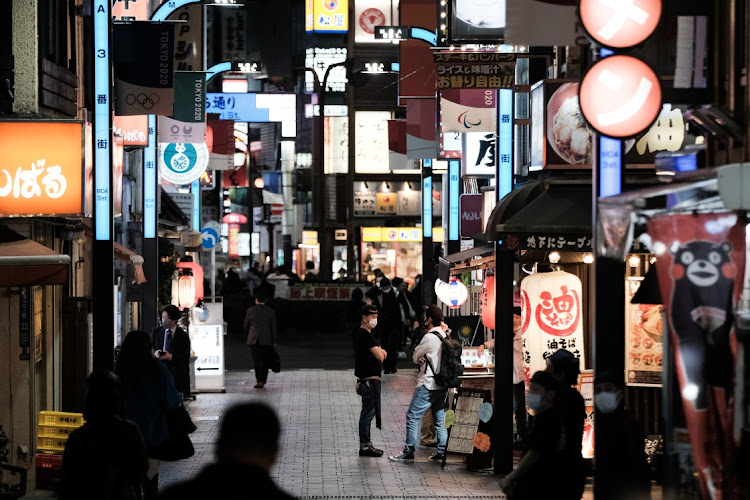 Pedestrians walk past restaurants at night in the Shinjuku district of Tokyo, Japan. Picture:SOICHIRO KORIYAMA/BLOOMBERG

Tokyo - Typhoon winds and rain dampened what might have been a more celebratory mood in Tokyo on Friday, as restaurants were allowed to sell alcohol and stay open later after the lifting of the latest Covid-19 state of emergency.

Japan is cautiously easing restrictions that have prevailed across much of the nation for almost six months. New Covid cases in Tokyo totalled 200 on Friday, a sharp drop from more than 5,000 a day in August amid a fifth wave driven by the infectious Delta variant that brought the medical system to the brink.

The restrictions, intended to blunt infections by reducing mobility and interaction, have been particularly tough on the service sector.

Minoru Sasaki, president of a liquor wholesaler company Sasaki , said about 20% of his customers have had to close their doors during the pandemic, and he was relieved that people could now drink again in restaurants.

“I'm really happy!” Sasaki said about the easing. “The employees are looking forward to getting back to business. Up to now, they've been talking about how they'll have to diet to shed the weight they've gained in the meantime. Everyone is thinking positively, which is a big help.”

Businesses large and small prepared to welcome in drinkers from Friday, even as the rain fell in sheets.

Suntory Holdings said orders for beer kegs and bottles were up 230% in the run-up to Friday, compared to the previous week. Beer halls run by Kirin Holdings and Sapporo Holdings reopened with heightened infection controls, such as plastic partitions, air-quality meters and limits on the number of people per party.

But even as cases subside and the number of Japanese fully vaccinated reaches 60% of the population - above the level in the US - public health experts are concerned about a possible rebound this winter that could send the country back into yet another emergency situation.

“After such a long state of emergency, from today there will be a lot of people wanting to go out, and that could lead to a quicker rebound,” said Koji Wada, professor of public health at the International University of Health and Welfare in Tokyo.

“These rebounds tend to happen within about three weeks when there are no vaccines, so a key point will be to see how we do beyond that time now that vaccination has progressed, and also to be wary of a possible worsening of the situation around November,” he added.

Even from today, some voluntary restrictions will remain in place.

Restaurants and bars can only serve alcohol until 8pm and are asked to close at 9pm. The government has said such restrictions may be lifted further with the implementation of a system to check vaccination or Covid-19 testing status, but details on the plan remain sketchy.

Throughout the pandemic, Japan has eschewed the kind of harsh lockdowns on commerce and travel imposed in Europe and the US, relying mostly on strong requests and social pressure to gain compliance from the public.

But not everyone plays along. Global-Dining, which runs 43 restaurants including one that inspired the movie “Kill Bill: Volume I”, has sued the Tokyo government for trying to impose curbs on its operating hours and sales of alcohol.

“I don't think we would do anything special,” CEO Kozo Hasegawa said about the restriction easing.

“We have been operating our restaurants as usual except for ones in shopping malls.”