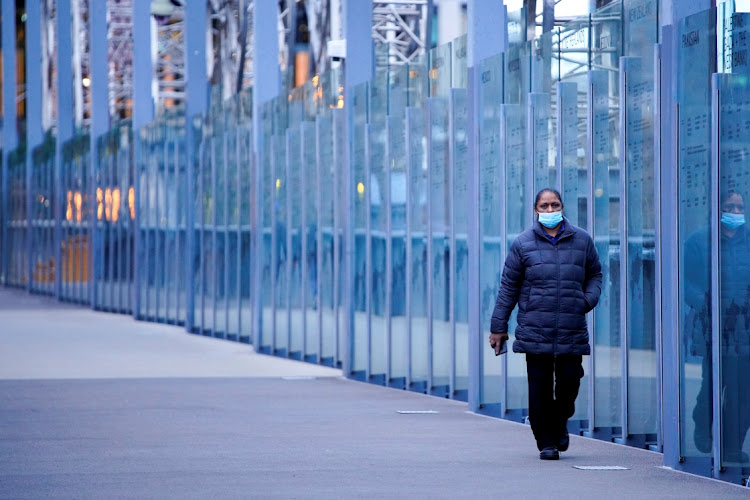 A woman wearing a protective face mask walks along a deserted city bridge during a lockdown in Melbourne in July 2021. Picture: REUTERS/SANDRA SANDERS

The daily increase was still the state’s second-highest, after the 847 cases logged on Saturday, as officials battle to contain a Delta variant outbreak that has taken root since midyear.

Australia's two most populous states, Victoria and New South Wales, have been struggling to contain the highly infectious variant while they ramp up vaccinations to 80% of the population, a threshold that will allow officials to ease strict lockdown measures.

Three-quarters of Australians have had a first dose of vaccine, while just half have had both doses.

Prime Minister Scott Morrison said in an interview aired on Sunday that he expects states to open up borders and ease restrictions once the 80% vaccination threshold has been met.

“We each have a personal responsibility for looking after our own health. And so it’s important that we do move forward,” he said.

“There comes a time when you just got to move on and get on with it,” he said from Washington, where he held a summit with his counterparts from the US, Japan and India.

Morrison said his message to Australians was “that what I’d like them to have for Christmas is their lives back. And that’s within the gift of governments. And that’s a gift I’d like to see us give them.”

New South Wales recorded nine deaths, according to government data on Sunday, while new locally acquired infections fell for a third day to 961, the lowest daily number in nearly a week, raising hopes that cases may have peaked, originally expected in mid-September, as vaccination rates climb.

“While we are extremely encouraged by the downwards trend that we have seen, with Delta you cannot be complacent,” said state premier Gladys Berejiklian.

The state’s first dose rate has risen to 85.2% of people over 16 years of age, while 59.1% of the population has had their second dose.

New South Wales has recorded 288 deaths in the Delta outbreak, accounting for nearly a quarter of the country’s about 1,230 deaths.

State government officials are to finalise a road map this week for what to do when the 80% target is met, as focus shifts to when to reopen community activities to the unvaccinated.

Sporting events, regional travel, pubs, restaurants and other functions may remain off limits to unvaccinated people until as many as 90% of the state’s adults have had two doses.