Police made more than 60 arrests on Tuesday after more than 2,000 protesters damaged property, blocked a busy freeway and injured three police officers 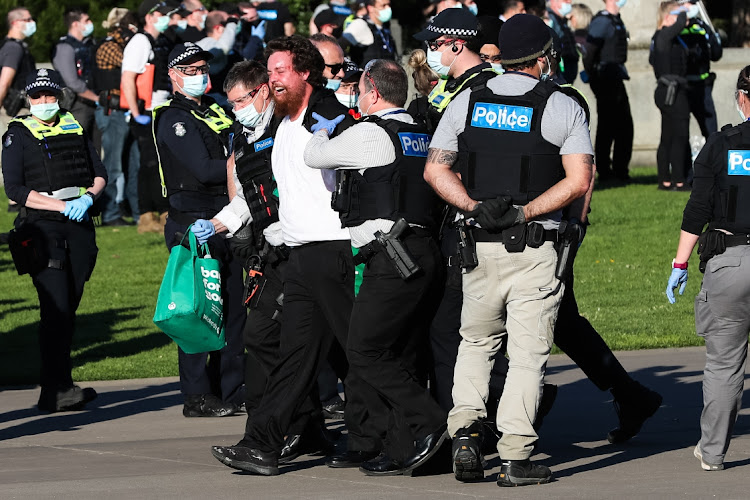 A protester is taken away by police at the Shrine of Remembrance in Melbourne, Australia, during a protest against lockdown restrictions on September 22 2021. Picture: GETTY IMAGES/ASANKA RATNAYAKE

Sydney — Police fanned out across the centre of Australia’s second-largest city of Melbourne on Wednesday in a bid to keep a lid on a third day of protests over Covid-19 lockdown curbs, as the state of Victoria recorded another rise in infections.

Police made more than 60 arrests on Tuesday after more than 2,000 protesters damaged property, blocked a busy freeway and injured three police officers after authorities shut construction sites for two weeks to limit the spread of the disease.

Protesters again gathered in groups roaming across city streets on Wednesday despite pleas for them to remain home, but largely avoided clashes with busloads of police, while state police chief Shane Patton vowed to prevent more violence.

“I'm not going to talk about the tactics we’ll deploy today,” Patton told media in Melbourne. “I want them to be completely unaware of what we're going to do and what capacity they may face.”

By early afternoon, television footage showed several hundred protesters had gathered at the Shrine of Remembrance, a memorial near the city centre honouring service in war, under the watch of police.

“There have been a couple of arrests,” deputy commissioner Rick Nugent told radio station 3AW.

The protests followed a decision by authorities to make vaccines mandatory for construction workers and to enforce the closure of building sites from Tuesday, citing noncompliance with health rules.

Authorities and union officials have said extremist and far-right groups had joined the protest.

“There were some people there who you would say were from the building industry. There were others who were not … they are not there to protest, they are there for a fight, pretending to be protesting,” said the state's premier, Daniel Andrews.

Protesters have refused to speak to reporters on the scene, chanting “fake news” when approached, media said.

Australia’s largest cities of Sydney and Melbourne, as well as its capital, Canberra, have been in lockdown for weeks to contain a Covid-19 Delta outbreak.

It is the sixth lockdown for Melbourne, the most of any Australian city since the pandemic began.

Authorities aim to resume daily activities in Sydney and Melbourne in a staggered fashion, easing some curbs when the share of fully vaccinated adults in the population reaches 70%, which is expected in October.

About 54% of people aged 16 years and above are fully vaccinated in the most populous state of New South Wales and 45% in Victoria.

Despite the easing talk, Sydney cancelled plans for a traditional 9pm New Year's Eve fireworks display for a second year in a row, but will probably stick with plans for a separate midnight display.

A city spokesperson said authorities aimed to limit the “mixing of crowds” between the two.

Victoria recorded 628 new Covid-19 infections on Wednesday, the year’s biggest one-day rise, exceeding the previous high of 603 a day before. New South Wales, whose capital is Sydney, had a total of 1,035 new infections, up from 1,022 on Tuesday.

Australia’s tally of infections stands at about 90,300, including 1,186 deaths, with eight new deaths reported.