Regardless of who wins the leadership vote, the governing party is expected to perform better without Suga 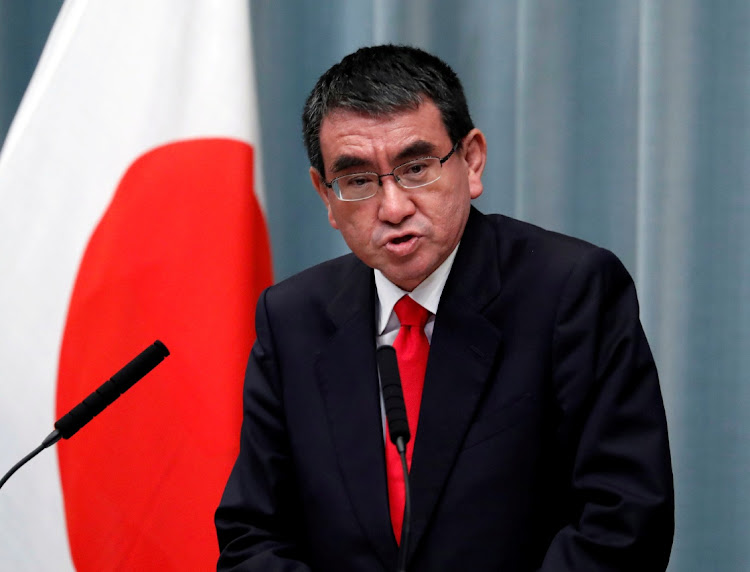 Taro Kono, who is favoured by foreign investors, in September 2019. Picture: REUTERS/ISSEI KATO

With Japanese politics dominated for the past decade by Shinzo Abe and his successor Yoshihide Suga, investors have had limited chances to make trades based on new policies. The opportunity has now arrived.

Suga’s unexpected resignation as prime minister has juiced Tokyo’s markets and stoked speculation over who will succeed him. Several high-profile politicians are lining up, though only former foreign minister Fumio Kishida has officially declared his candidacy and unveiled a platform.

“Markets are going to be paying attention to the candidates’ individual policies,” said Tomo Kinoshita, a global market strategist at Invesco Asset Management in Tokyo. Views on energy policy, Japan’s inflation target and Japan’s relationship with China are already being closely parsed.

Regardless of who wins the September 29 leadership vote, the ruling Liberal Democratic Party (LDP) is expected to perform better in a forthcoming general election than it would have under Suga. Here’s a look at some of the top candidates and the benefits and baggage they might bring to Japan’s top office.

A favoured candidate of foreign investors, a victory for Taro Kono would bring a fluent English speaker into the prime minister’s office. His candidacy is already helping to boost sections of Tokyo’s markets, with polling data also showing he is the preferred candidate among the public.

As administrative reform minister, Kono is known for his opposition to the country’s fax- and paper-based bureaucracy. Having a red-tape buster in power could be good news for firms that sell digitalisation solutions, such as Bengo4.Com or GMO GlobalSign.

In his recently published book, Moving Japan Forward, Kono writes how he was an early advocate for remote work as a young employee at Fuji Xerox. That might make him a more convincing candidate than Suga to persuade Japanese firms to support the telework concept.

Kono has also been a vocal opponent of nuclear power in the past. Should he enter the race and win, utilities such as Kansai Electric Power, Hokuriku Electric Power and Electric Power Development could be among the losers — furthering sector declines on Monday. On the flip side, renewable energy firms Renova and eRex could see more gains.

But Norihiro Fujito, chief investment strategist at Mitsubishi UFJ Morgan Stanley Securities, cautions against reading too much into Kono’s past comments. “Whether he will actually reflect his previous stance into his policies once the race for the prime minister position begins, is a different story,” he said.

While not as popular with the public as Kono, some nonetheless see Kishida as the current favourite, including analysts at Citigroup. He is the only candidate to have already outlined his platform, which was heavy on responses to the pandemic — playing up the contrast with Suga’s performance.

The medical sector could get a boost from Kishida’s proposal to form a crisis-response centre designed to bring pandemic policies under one roof, with the prospect of a Kishida premiership already boosting smaller firms such as Leoclan and Litalico. Other potential beneficiaries could be telemedicine provider M3 or test-maker Takara Bio.

Kishida said he plans to use “vaccine passports” to normalise economic activity, which might provide sustained support to so-called reopening plays such as rail operators, airlines, travel agents and restaurants.

While Sanae Takaichi is seen as a longer shot, reports that she may get an endorsement from Abe has increased attention on her candidacy. She is seen as the most likely successor to the former prime minister’s “Abenomics” playbook.

“She has the strongest lean towards adopting a reflationary policy,” analysts from Morgan Stanley MUFG Securities wrote in a September 3 note. The report also highlighted her calls for ¥100-trillion in spending on disaster prevention over 10 years. Japan construction and machinery firms would probably benefit from such a plan.

Takaichi is an advocate for more spending on cybersecurity. Meanwhile, in a recent article in the magazine Bungei Shunju, she said Japan should develop quantum-computing prowess and add support to areas where Japan already has technological prowess, such as the power chips made by Toshiba and Nand flash memory made by its spin-off Kioxia.