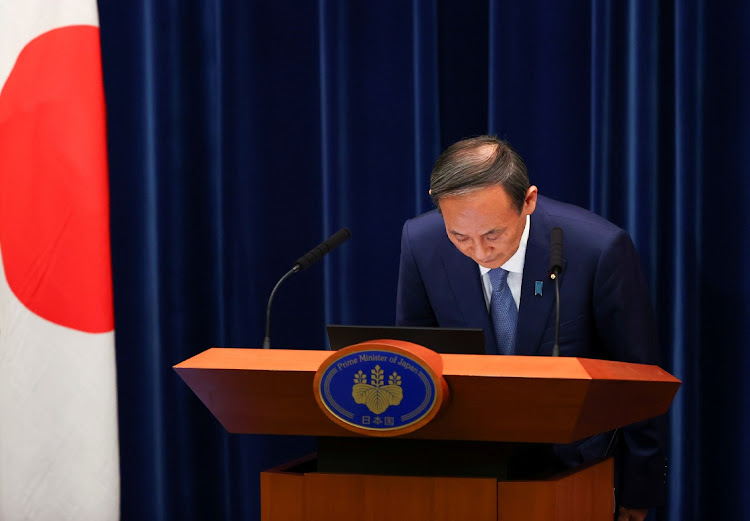 Japanese Prime Minister Yoshihide Suga said he would resign after failing to control the country’s coronavirus surge, leaving the ruling party scrambling to find a new leader weeks before a general election.

Suga told reporters on Friday that he could not campaign for re-election as leader of the Liberal Democratic Party (LDP) this month while battling the virus, ending his premiership almost exactly a year after it started. Whoever becomes the next LDP leader is virtually assured of becoming prime minister due to the party’s dominance in parliament.

“Since I became prime minister a year ago, dealing with coronavirus has been at the centre of my efforts,” Suga, 72, said in a brief statement without taking questions. “Dealing with the virus while campaigning for the election would take a huge amount of energy. I realised I couldn’t do both and I should choose one.”

Japanese stocks climbed on hopes that Suga’s successor would bring about favourable policy changes and be more adept in handling the pandemic. The Topix index jumped as much as 1.8% as trading resumed after the midday break, rising to its highest since 1991. The Nikkei 225 Stock Average rallied as much as 2.1%. Local equities were the best performers in Asia on the day.

Suga’s approval ratings have plummeted over his handling of Japan’s worst-yet wave of virus cases, which coincided with the Tokyo Olympics. In recent weeks, he had seen a series of alarming setbacks, including a loss by one of his allies last month in an election for mayor of Yokohama, the city where he began his political career.

“The current prime minister is walking out because I think he’s sick and tired of excessive pressure from these corona-related issues,” Seijiro Takeshita, a professor at the University of Shizuoka who specialises in international business management and comparative governance, told Bloomberg Television. “It’s going to be a very colourful election because they think it will be a very good chance for them to have the seat of prime minister.”

Suga decided not to seek a new term as leader after his efforts to reshuffle the ruling party’s executive team faced resistance, Kyodo News reported, citing a person close to the prime minister’s office.

“To be honest, I’m surprised,” LDP secretary-general Toshihiro Nikai told reporters earlier on Friday. “But I believe he came to this decision after thinking about it deeply.” Nikai, a powerful back room broker, had been listed as one person who could lose his post, Kyodo and other local media said.

Suga took over as prime minister on September 16 2020, hoping to avoid a return to the days of revolving-door leaders after his predecessor, Shinzo Abe, became Japan’s longest-tenured premier. But corruption scandals, the sluggish Covid response and public opposition to holding the Olympics took their toll.

Suga has faced widespread criticism of his handling of the pandemic. While the country has succeeded in keeping its death toll at a fraction of the level seen in many other developed nations, a shortage of hospital beds and reports of people dying from the virus at home have sparked anxiety among the public.

Japan must hold a general election by the end of November, in which the ruling coalition is likely to remain in power despite losing seats. Support for the main opposition party is mired in single digits.

The procedural requirements of appointing a new prime minister could make it difficult to hold an election before October 21, Kishida, Suga’s only declared rival for the party leadership, told the Nikkei newspaper. Kishida has vowed to spend more to tackle the virus, and revitalise the LDP by appointing younger executives.

Kono is not only popular, but a member of finance minister Taro Aso’s powerful faction. Ishiba ran unsuccessfully against Suga a year ago.

The incident ‘shows that autonomous vehicles are not yet realistic for normal roads’, Toyota CEO Akio Toyoda says
Companies
3 weeks ago
Next Article