With many banks and money markets ordered to reopen, people queue for hours to withdraw limited amounts of cash 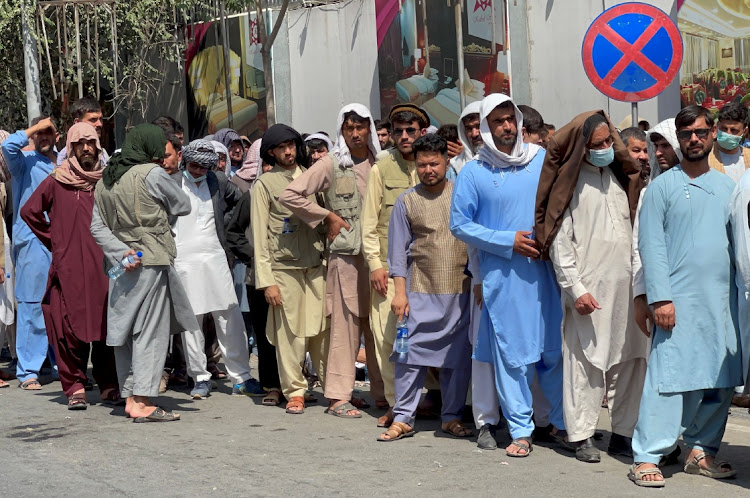 Afghans line up outside a bank to take out their money after Taliban takeover in Kabul, Afghanistan on September 1, 2021. Picture: REUTERS

Milan/London/Islamabad — As Kabul began a new era of Taliban rule, long queues outside banks and soaring prices in the bazaars underlined the everyday worries now facing its population after the spectacular seizure of the city two weeks ago.

For the Taliban, growing economic hardship is emerging as their biggest challenge, with a sinking currency and rising inflation adding misery to a country where more than a third of the population lives on less than $2 a day.

Even for the relatively well-off, with many offices and shops still shut and salaries unpaid for weeks the daily struggle to put food on the table has become an overwhelming preoccupation.

“Everything is expensive now, prices are going up every day,” said Kabul resident Zelgai, pointing out that tomatoes which cost 50 afghani the day before were now selling for 80.

In an effort to get the economy moving again, banks that closed as soon as the Taliban took Kabul have been ordered to reopen. But strict weekly limits on cash withdrawals have been imposed and many people still faced hours of queuing to get at their cash.

Outside the city, humanitarian organisations have warned of impending catastrophe as a severe drought has hit farmers and forced thousands of rural poor to seek shelter in the cities. People huddling in tent shelters by roadsides and in parks are a common sight, residents said.

In a cash-based economy heavily dependent on imports for food and basic necessities and now deprived of billions of dollars in foreign aid, pressure on the currency has been relentless.

The afghani was recently valued at about 93-95 to the dollar in Kabul and the eastern city of Jalalabad, compared with about 80 just before the fall of the city. But the rate is only an indicator, because normal money trading has dried up.

In the Pakistani city of Peshawar, close to the border, many money traders are refusing to handle the Afghan currency, which has become too volatile to value properly. Only the sheer scarcity of cash has kept it from falling further, with international shipments of afghanis and dollars yet to resume.

“In the bazaar you can exchange for a bit over 90 but it goes up and down because it’s not official,” said one trader. “If they open the exchanges again it will go up over 100, I’m sure of it.”

The fall in the exchange rate has seen prices for many basic foodstuffs ratchet up daily, squeezing people who have seen their salaries disappear and their savings put out of reach by the closure of banks.

Kabul market traders said a 50kg bag of flour was selling for 2,200 afghanis, about 30% above its price before the fall of the city, with similar rises for other essentials like cooking oil or rice. Prices for vegetables were up to 50% higher, while petrol prices rose 75%.

Remittances from abroad have also been cut off by the closure of money transfer operators like Western Union, and increasing numbers of people have been trying to sell jewellery or household goods, even if they have to accept a fraction of their value.

“Two weeks ago, people were buying but the situation now is not good and no-one is buying,” said one vendor. “People’s money is stuck in the banks and no-one has money to buy anything.”

Taliban officials have said the problems will ease once a new government is in place to restore order to the market and have appealed to other countries to maintain economic relations. But the structural problems run deep.

Even when its economy was floating on a tide of foreign money, growth was not keeping pace with the rise in Afghanistan’s population. Apart from illegal narcotics, the country has no significant exports to generate revenue, and aid, which accounted for more than 40% of economic output, has abruptly disappeared.

A new central bank chief has been appointed but bankers outside Afghanistan said it would be difficult to get the financial system running again without the specialists who joined the exodus out of Kabul. “I don’t know how they will manage it because all the technical staff, including senior management, have left the country,” one banker said.

In a sign of the pressure on Afghanistan’s currency reserves, the Taliban announced a ban on taking dollars and valuable artefacts out of the country and said anyone intercepted would have their goods confiscated. About $9bn in foreign reserves is held outside the country and out of reach of the Taliban’s embryonic government, which has still not been officially appointed, let alone recognised internationally.

To add to the problems, the suicide attack by an Afghan offshoot of Islamic State on crowds waiting to get a place on evacuation flights brought a chilling reminder that the bombings that were a regular feature of life in the past may not be over.

“The market situation had slightly improved in the last few days,” said one vendor at a Kabul street market where people sell household goods to raise cash. “But it completely collapsed after the suicide attack near the airport.”

Over 123,000 people were evacuated from Kabul by the US and allies over the past two weeks, but many of those who helped Western nations were left ...
World
10 months ago

Fanoos Basir, who played for the Afghanistan women’s national team, vows to start again after finding refuge in France
World
10 months ago

If the situation changes, troops and civilians will be trapped like the British column in the Hindu Kush in 1842
Opinion
10 months ago
Next Article