The Taliban has said it won’t extend Aug. 31 deadline, but President Joe Biden says US troops may stay behind for longer as negotiations continue 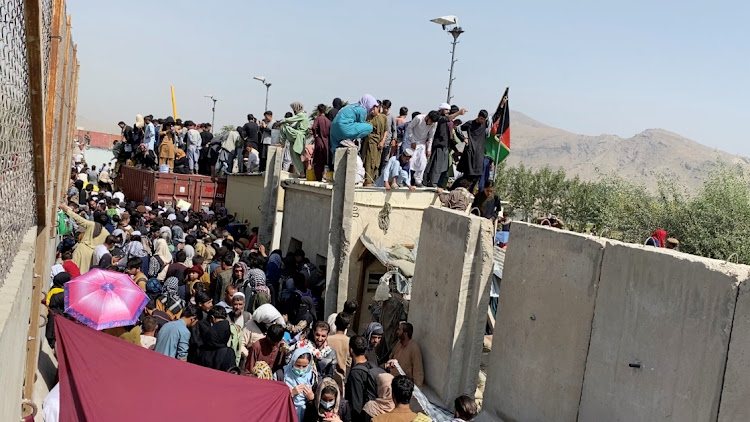 Western troops at Kabul airport worked frantically on Tuesday to evacuate people from Afghanistan before an Aug. 31 deadline as US President Joe Biden faced growing pressure to negotiate more time to airlift thousands trying to flee the Asian country.

Leaders of the G7 countries — Britain, Canada, France, Germany, Italy, Japan and the US — were due to meet virtually on Tuesday to discuss the crisis. British Prime Minister Boris Johnson is expected to push for a deadline extension.

Chaos punctuated by sporadic violence has gripped the airport, with foreign troops and Afghan security guards driving back crowds clamouring to get on flights after the Taliban’s takeover of the Afghan capital, Kabul, on Aug. 15.

Countries that have evacuated about 58,700 people over the past 10 days were trying to meet the deadline agreed earlier with the Taliban for the withdrawal of foreign forces, a Nato diplomat said.

“Every foreign force member is working at a war-footing pace to meet the deadline,” said the official, who declined to be identified.

Biden, who has said US troops might stay beyond the deadline, has warned the evacuation was going to be “hard and painful” and much could still go wrong.

A Taliban official on Monday said an extension would not be granted, though he said foreign forces hadn’t sought one. Washington said negotiations were continuing.

Democratic US. Representative Adam Schiff, who chairs the House of Representatives Intelligence Committee, told reporters after a briefing by intelligence officials that he did not believe the evacuation could be completed in the days remaining.

“It’s possible but I think it’s very unlikely given the number of Americans who still need to be evacuated,” Schiff said.

UK defence minister Ben Wallace told Sky News he was doubtful the deadline would be extended, but German Foreign Minister Heiko Maas said his country was working with the US and Britain to ensure the Nato allies can fly civilians out after the deadline.

“Even if the deadline is Aug. 31 or is extended by a few days, it will not be enough to evacuate those we want to evacuate and those that the US wants to evacuate,” Maas told Bild newspaper.

“That’s why we are working with the US and Britain to ensure that once the military evacuation is completed it is still possible to fly civilians out of Kabul airport.”

In Moscow, Russian Foreign Minister Sergei Lavrov said the Kremlin was interested in serving as a middleman in resolving the crisis along with China, the US and Pakistan.

At the same time, he said, Russia opposes the idea of allowing Afghan refugees to enter the ex-Soviet region of Central Asia or having US troops deployed there.

“If you think that any country in Central Asia or elsewhere is interested in becoming a target so that the Americans could fulfil their initiatives, I really doubt anyone needs that‚” Lavrov said during a visit to Hungary.

The frantic evacuation operation kicked off after the Taliban seized Kabul on Aug. 15 and the US-backed government collapsed as the US and its allies withdrew troops after a 20-year presence.

The militant group had been ousted by US-led forces in the weeks after the Sept. 11, 2001, attacks on the US by Al-Qaeda militants whose leaders had found safety in Afghanistan.

Many Afghans fear reprisals and a return to a harsh version of Islamic law that the Taliban enforced when in power from 1996 to 2001, in particular the repression of women.

The top UN human rights official, Michelle Bachelet, said she had received credible reports of serious violations committed by the Taliban, including summary execution of civilians and restrictions on women and protests against their rule.

“A fundamental red line will be the Taliban’s treatment of women and girls,” she told an emergency session of the Human Rights Council in Geneva.

An Afghan diplomat from the former government told the forum that millions of people feared for their lives amid reports of door-to-door searches. China’s UN envoy said the US army and its partners should be held accountable for rights violations they committed in Afghanistan.

The G7 leaders could discuss taking a united stand on whether to recognise a Taliban government, or alternatively renew sanctions to pressure the Islamist militant movement to comply with pledges to respect women’s rights and international relations.

“The G7 leaders will agree to co-ordinate on if, or when, to recognise the Taliban,” said one European diplomat. “And they will commit to continue to work closely together.”

Leaders of the Taliban, who have sought to show a more moderate face since capturing Kabul, have begun talks on forming a government that have included discussions with some old enemies from past governments, including a former president, Hamid Karzai.

The Pajhwok news agency reported that Taliban officials had been appointed to various posts including a governor of Kabul, acting interior and finance ministers and intelligence chief. A Taliban spokesperson wasn’t available for comment.

Recognition of a Taliban government by other countries would have important consequences, such as allowing the regime access to foreign aid that previous Afghan governments have depended upon.

Biden has faced widespread criticism over the withdrawal, which was initiated by his Republican predecessor, Donald Trump, under a deal struck with the Taliban, and his opinion poll ratings have slipped.

While Western countries have been trying to get people out, humanitarian agencies are struggling to get aid in. The World Health Organisation has enough supplies in Afghanistan to last for a only week, an agency official said.

The situation in Afghanistan for the youth is deeply depressing, But in SA, the plight of our youngsters seems somehow more hopeless
Opinion
11 months ago

Peter Bruce talks to former UN special representative in Afghanistan, Nicholas Haysom and asks if it is worth the effort of trying to build democracy ...
News & Fox
11 months ago
Next Article