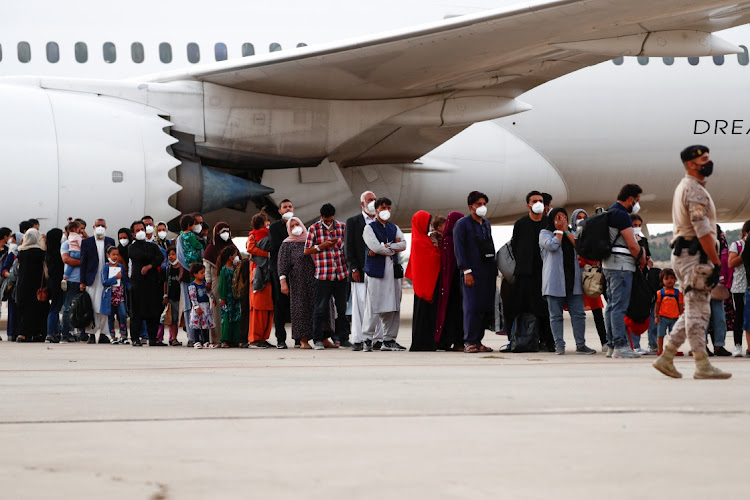 Afghan citizens who have been evacuated from Kabul arrive at Torrejon Air Base in Torrejon de Ardoz, outside Madrid, Spain, August 24 2021. Picture: REUTERS/JAVIER BARBANCHO

Afghanistan’s new Taliban rulers said on Tuesday all foreign evacuations from the country must be completed by August 31, and US President Joe Biden was reported to be aiming to stick to the date due to the high chance of a terrorist attack.

The developments follow what two US officials said was a meeting between CIA director William Burns and Taliban leader Abdul Ghani Baradar in Kabul on Monday to discuss the chaos in Afghanistan after the Taliban's unexpectedly swift takeover.

Biden, who said last week troops might stay past August 31 to evacuate Americans, will follow a Pentagon recommendation to remove the troops by that date as long as the Taliban enables the US to complete its evacuations, three US officials said.

Two US officials, speaking on condition of anonymity, said there was increasing concern about suicide bombings by Islamic State militants at the airport, which has been overwhelmed by Afghans and foreign citizens rushing to leave, fearing reprisals.

One US official said it was no longer a question of if, but when, militants would attack and the priority was to get out before it happened.

The hardline Islamist Taliban told the thousands of Afghans crowding into the airport in the hope of boarding flights that they had nothing to fear and should go home.

“We guarantee their security,” Taliban spokesperson Zabihullah Mujahid told a news conference in the capital, which Taliban fighters seized on August 15 from the Western-backed government after two decades of war.

As he spoke, Western troops were working frantically to get more foreigners and Afghans onto planes and out of the country.

Mujahid said the Taliban had not agreed to an extension of the August 31 deadline and called on the US not to encourage Afghan people to leave their homeland. He also urged foreign embassies not to close or stop work.

UN human rights chief Michelle Bachelet said she had received credible reports of “summary executions” of civilians and Afghan security forces who had surrendered. The Taliban has said it will investigate such reports.

Leaders of the G7 major industrialised nations — Britain, Canada, France, Germany, Italy, Japan and the US —  met virtually to discuss how to complete the chaotic withdrawal and deal with the Taliban now that they have seized power.

They said they would remain committed to Afghanistan and back the UN in co-ordinating immediate humanitarian help in the region, which faces a new influx of refugees.

The talks did not result “in new dates” for the end of the evacuation mission, German Chancellor Angela Merkel said, though there were intensive discussions on whether a civilian-operated airport in Kabul could be used after August 31.

The leaders agreed on the need to press the Taliban to allow people to leave after August 31, Canadian Prime Minister Justin Trudeau said.

Countries that have evacuated nearly 60,000 people over the past 10 days were rushing to complete the job, a Nato  diplomat said. “Every foreign force member is working at a war-footing pace to meet the deadline,” said the official, who declined to be identified.

The US-backed government collapsed as the US and its allies withdrew troops two decades after they ousted the Taliban in the weeks after the September 11 2001 attacks on the US  by Al-Qaeda militants, whose leaders had found safe haven in Taliban-ruled Afghanistan.

Leaders of the Taliban, who have sought to show  a more moderate face since capturing Kabul, have begun talks on forming a government that have included discussions with some old enemies, including former president Hamid Karzai.

The Taliban appointed a former Guantánamo detainee, Mullah Abdul Qayyum Zakir, as acting defence minister, the Qatar-based Al Jazeera news channel said, citing a source in the Islamist movement. Some former Afghan government officials say they have been ordered back to work.

Many Afghans fear reprisals and a return to a harsh version of sharia (Islamic law) that the Taliban enforced when in power from 1996 to 2001, in particular the repression of women.

Taliban spokesperson Mujahid said there was no list of people targeted for reprisals and the group was trying to come up with a procedure so women could return to work.

Bachelet said the UN would be watching closely. “A fundamental red line will be the Taliban’s treatment of women and girls,” she told an emergency session of the UN Human Rights Council in Geneva.

The G7 leaders were expected to consider whether to recognise a Taliban government, or alternatively renew sanctions to pressure the movement to comply with pledges to respect women's rights and international relations.

“The G7 leaders will agree to co-ordinate on if, or when, to recognise the Taliban,” said one European diplomat.

British Prime Minister Boris Johnson said after the talks that if huge funds for Afghanistan were going to be unfrozen, the country could not be a breeding ground for terrorism.

World Food Programme executive director David Beasley said the politics needed to be decided fast because the combination of conflict, drought and the Covid-19 pandemic meant that 14-million Afghans could soon face starvation.

In Moscow, Russian foreign minister Sergei Lavrov said the Kremlin was interested in serving as a middleman in resolving the crisis along with China, the US and Pakistan.

At the same time, he said, Russia opposed the idea of allowing Afghan refugees to enter the former Soviet region of Central Asia or having US troops deployed there.

“If you think that any country in Central Asia or elsewhere is interested in becoming a target so that the Americans could fulfil their initiatives, I really doubt anyone needs that,” Lavrov said during a visit to Hungary.

Already well endowed with key minerals, China is cosying up to the Taliban as the US leaves
Opinion
11 months ago

There are lessons to be learnt from the failures of interventions, but that doesn’t mean the right answer is to withdraw
Opinion
11 months ago
Next Article