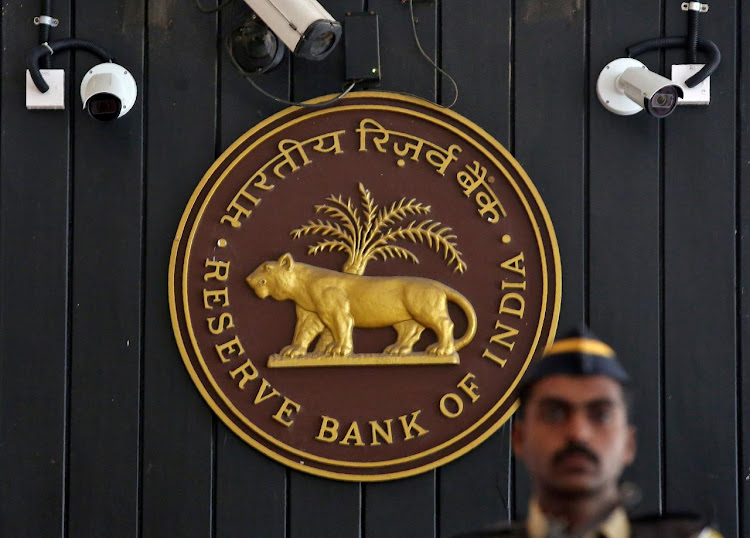 A security personnel member stands guard at the entrance of the Reserve Bank of India headquarters in Mumbai, India. Picture: REUTERS / SHAILESH ANDRADE

The Reserve Bank of India (RBI) has relaxed a rule on banks’ purchases of foreign sovereign bonds, paving the way for lenders to resume a profitable currency trade, according to people with knowledge of the matter.

In a notice sent to some banks on Monday, the RBI said foreign sovereign bonds would not fall under a regulatory cap that requires holdings of securities unlisted in India to be 10% or less of the total non-statutory liquidity ratio portfolio, the people said, asking not to be identified as they are not authorised to speak to media.

The RBI’s latest decision comes after banks made a representation seeking relaxation, the people said.

“The relaxation will cap upside to the forward premia and help banks to resume the trade once paying picks up in the dollar/rupee swap market,” said Nitin Agarwal, head of trading at Australia & New Zealand Banking Group in India.

The 12-month yield on forward dollar-rupee rates eased five basis points to 4.22% on Tuesday as banks started receiving swaps, taking comfort from the relaxation, according to Mumbai-based traders.

Earlier this month, the RBI had told some lenders to unwind trades that were in breach of the 10% limit, according to people who did not want to be identified.

These profitable trades picked up in March when some lenders had racked up exposures of more than $1bn each by using a regulatory loophole created in February to convert rupee deposits into dollars using a buy-sell swap — buying the greenback now while selling the same amount at a specified date in the future. They then used the proceeds to purchase US government debt and profited from the arbitrage, paying about 3.5% on the local currency deposits and earning 4.9% on the 12-month yield on the currency pair.

While the central bank was not too pleased with some of the foreign banks who borrowed rupee deposits to swap for dollars and earn fat returns, it helped contain the spike in forward premia rates.

A spokesperson for the RBI did not immediately respond to an
e-mail seeking a comment.

The country may experience a worsening of its outbreak as soon as this month, researchers say
World
4 months ago

The middle class, the engine of the consumer economy, shrank by 32-million last year
World
4 months ago
Next Article