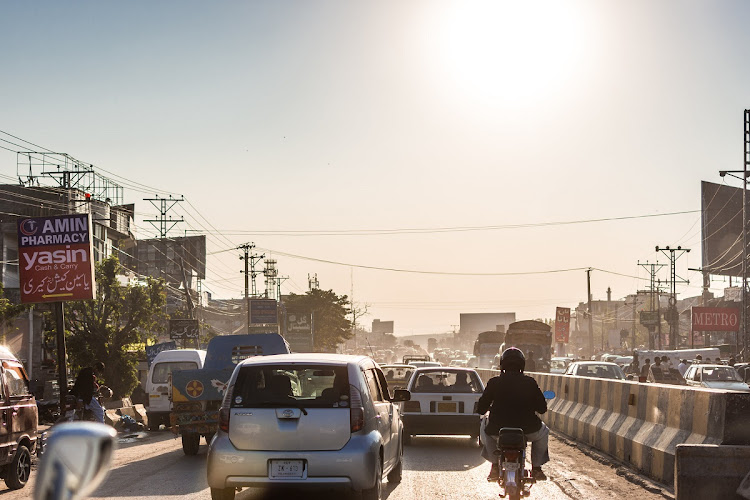 A congested motorway is shown in Rawalpindi city in Pakistan. Picture: 123RF/STARGAZER84

Peshawar — When Mukhtiar Ahmed heard that a new public transport system with air-conditioned buses was coming to the northwestern Pakistan city of Peshawar, he worried his customers would desert the beat-up people carrier he drove for a living.

“I was fearful that my old Ford wagon plying the same route would no longer be attractive to passengers,” Ahmed told the Thomson Reuters Foundation.

He estimated that the new Bus Rapid Transit (BRT) system, announced four years ago, would take away about 40% of the business independent bus owners like him relied on.

His concern disappeared, he said, when TransPeshawar, the government-owned company that operates the BRT, launched an initiative in 2019 to buy up decades-old, emissions-spewing buses to cut traffic congestion and carbon emissions.

Ahmed sold his bus for double its market value and bought a new low-emission people carrier to ferry passengers between Peshawar and Rawalpindi, 180km away. He has since made enough money to pay off all his debts.

“For the first time in my life, I have some savings for hard times,” said Ahmed.

In its latest bid to tackle Peshawar's toxic smog problem, the provincial government has devoted 670-million rupees (about R59m) to taking old buses off the road and encouraging citizens to switch to the BRT system.

But many bus owners who signed up to the project say the government is taking too long to give them their money, while local climate experts say the scheme will have little impact on carbon emissions unless it expands to include other vehicles.

A survey conducted before the start of the programme calculated there were 618 old buses, minibuses and people carriers being driven in Peshawar, said TransPeshawar spokesperson Umair Khan.

Owners were given 75 days to register before the window closed in June 2019, by which point nearly 420 had signed up to sell their vehicles for scrapping, Khan said.

So far, the government has bought vehicles from 146 of them, paying between 1.07-million and 1.4-million rupees for each, and is working to acquire the rest, he added.

“It is a win-win situation for the government and the bus owners,” he said.

Peshawar has a population of about 2-million, according to the latest census, many of whom travel around the city using informal public transport.

Those vehicles, mainly pickup trucks and large- and medium-sized buses from the 1980s and 1990s, account for more than 40% of the city's traffic, according to the Asian Development Bank, which is funding the new BRT system.

Up to 70% of Peshawar's air pollution comes from cars and other vehicles, with the daily air quality index from a monitoring station at the US consulate consistently showing pollution levels as “hazardous”, said Hizbullah Khan, professor of environmental sciences at the University of Peshawar.

The BRT, which became operational last August, aims to bring down those pollution levels by dedicating more than 27km of road to a fleet of low-emission buses.

The system can carry an average of 184,000 people per day when there are no pandemic-related travel restrictions, according to TransPeshawar.

Tickets for the BRT are cheaper than for informal buses, and spokesperson Khan said customers like that the new buses are comfortable, fast and have separate spaces for women, who commonly face harassment while using public transportation.

When bus owners sell to TransPeshawar, the route permits linked to their old vehicles are confiscated, ensuring they cannot simply buy another cheap, old bus to get back on the road, he explained.

The programme helps sellers find new jobs by including in the price paid for each bus 360,000 rupees of compensation for a year of lost business revenue.

“They get much more money than the original price of their vehicles and can easily switch to other businesses,” Khan said, adding drivers and conductors also have the chance to train to get new jobs in the BRT.

The bus buyback programme is so popular that Noor Mohammad Khan Mohmand, president of the Muttahida Transport Workers Federation in Peshawar, is urging the government to reopen it.

Mohmand said he knows of at least 120 bus owners who want to sell their vehicles through the scheme.

“As many bus owners are not literate enough, they found out about the programme after the registration was closed and are now waiting anxiously to [see] if the government extends it,” he said.

And many who have already registered face long waits for the government to buy their vehicles, Mohmand continued.

Khan, the TransPeshawar spokesperson, said the process has been slow because each old bus first has to go through checks by the authorities and an ad placed in local newspapers to confirm nobody else claims its ownership.

The government aims to finish the first round of purchases by the end of this year and will then decide whether to extend the programme, he added.

Environmental academic Khan agreed the project needs to roll out on a much bigger scale and include other types of vehicle if it has any hope of lowering pollution levels.

“I don't see that this project ... will significantly help in reducing emissions in the city where a huge number of three-wheeler smoke–emitting rickshaws also ply on roads,” he said.

For his part, Mukhtiar Ahmed would like to see the project continue so that more bus owners like him can reap the benefits.

“Many of my colleagues have switched to other businesses like poultry farming and establishing grocery stores,” he said. “They are earning more than they used to get from old buses.”