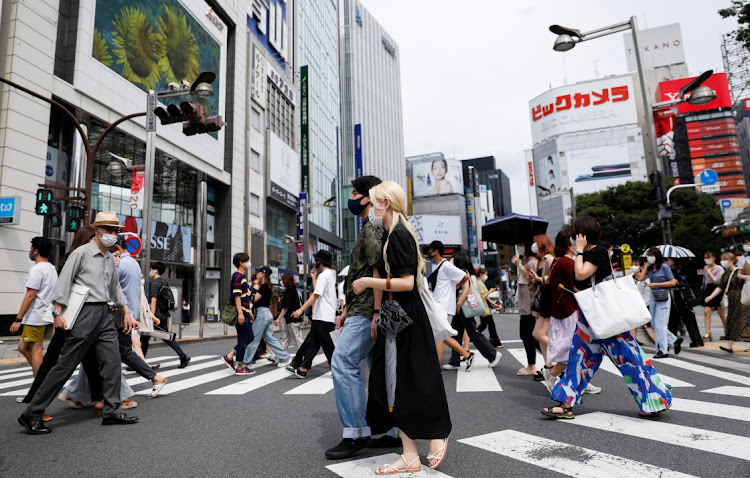 People walk through a shopping area of Shinjuku during the state of emergency in Tokyo, Japan, on July 26 2021. Picture: REUTERS/ANDRONIKI CHRISTODOULOU

Japan plans to expand a state of emergency to areas surrounding Tokyo and extend it to the end of August, in the face of a record virus surge unfolding as it hosts the Olympics.

The government’s expert panel approved the plan, which will also add Osaka, virus tsar Yasutoshi Nishimura told reporters on Friday. Prime Minister Yoshihide Suga is likely to make it official at a task force meeting beginning at 5pm local time and give a news conference on the situation at 7pm.

The expansion comes after three straight days of record Covid-19 infections in Tokyo and as national daily infection figures soared above 10,000 for the first time since the pandemic began about 18 months ago.

While Japan has so far suffered far fewer Covid deaths than any Group of Seven nation, only about 28% of its population is fully vaccinated, the lowest in the group, with the US, Germany and Britain at about 50% or higher. The pace of the rollout will affect public sentiment ahead of a general election that must be held by the end of November.

Nishimura told reporters he expected Japan’s immunisation rollout to match levels in the US and Europe by the end of August.

Some analysts called for clearer messaging from the government, saying that simply waiting for vaccines to deal with the situation was not enough.

“I want Suga to make it clear that the situation really is dire so that people get a renewed sense of urgency,” said Mari Iwashita, chief market economist at Daiwa Securities. “The colourless approach he’s taken so far isn’t going to work.”

Experts have warned the health-care system is coming under strain, and a group of medical organisations including the Japan Medical Association on Thursday gave a news conference to call on the government to consider expanding the emergency across the whole country, NHK reported.

“It’s hard for Suga to take drastic steps now because the Olympics are under way with the Paralympics to come,” said Hirofumi Suzuki, economist at Sumitomo Mitsui Banking Corporation. “Introducing stronger measures now would invite further criticism over the legitimacy of holding the games in the first place.”

The government’s plan is to add three prefectures adjacent to Tokyo — Chiba, Saitama and Kanagawa. The southern island of Okinawa, which is also seeing record infections, is already under similar measures.

The effect on the economy of expanding the emergency may be limited. While bars and restaurants are being instructed to stop serving alcohol and to close by 8pm, public fatigue with the measures has set in, and some establishments are ignoring the rules, despite the risk of fines.

Cases directly associated with the Olympics have remained relatively low and Suga denied on Thursday that the event caused the surge in the rest of the country. Tokyo 2020 organisers reported another 27 cases linked to the games on Friday, including three athletes, bringing the total to 220, more than half of them residents of Japan.

The 2020 Tokyo Olympic Games kicked off — a year late, and amid fierce criticism
Features
1 year ago