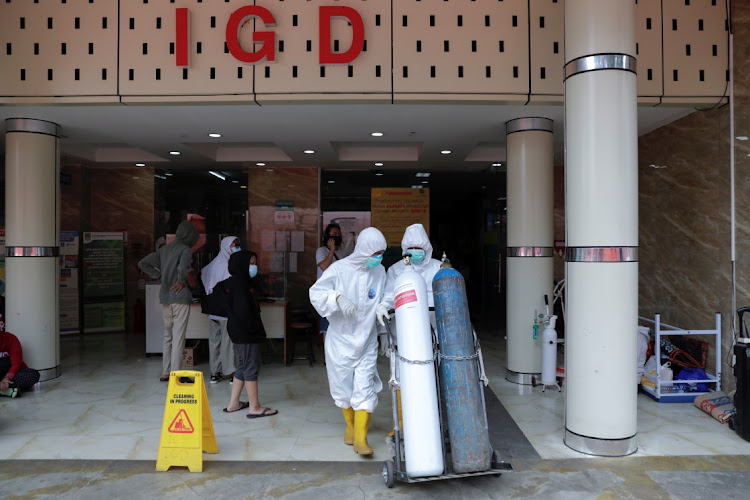 Medical workers in personal protective equipment push oxygen cylinders outside the emergency ward of a government-run hospital amid the surge of Covid-19 in Bekasi, on the outskirts of Jakarta, Indonesia, on July 15 2021. Picture: REUTERS/WILLY KURNIAWAN
Image: WILLY KURNIAWAN

Jakarta — Indonesia’s worsening Covid-19 crisis is raising pressure on the government to lift spending and widen the budget deficit, even as ratings agencies warn any loosening of the country’s hard-won fiscal discipline could bode ill for its credit ratings.

The world’s fourth-most populous nation has Asia’s second-highest pandemic death toll and caseload and a slow vaccination programme means it is ill-prepared to reopen at the same pace as other countries. That has increased vulnerabilities in an economy that has been badly hit by capital flight and financial crises in the past.

There is mounting political pressure to address growing economic hardships with the chair of parliament’s budgetary committee calling for legislative changes to allow for larger fiscal deficits in 2023.

By law, Indonesia has an annual fiscal deficit cap of 3% of GDP, but this was waived from 2020 to 2022 to make room for pandemic relief measures and would need to be waived again for 2023 under Abdullah’s proposal.

“We can’t just abandon social protection programmes even after Covid disappears. The people won’t be ready.”

President Joko Widodo on Sunday extended mobility curbs to control the spread of the virus until at least August 2, though restrictions were eased for some small businesses. The broader curbs have been in place since early July.

Already, S&P, Moody’s and Fitch said the growing Covid-19 crisis has increased risks to credit conditions and could force the government to raise spending to protect the poor as tax revenues take a hit.

The three agencies give Indonesia the second lowest investment grade rating. While Fitch and Moody’s have the ratings on “stable” outlook, S&P’s outlook is “negative”, which indicates the next move could be a downgrade.

Last year’s 6.1% deficit was already the biggest in decades and though the country’s debt to GDP is comparably lower than other emerging markets, its tax take is among of the lowest in the Asia-Pacific and interest payments on debt relative to revenue are high.

While Abdullah agreed the government should target stricter fiscal discipline, he said he would be open to supporting a waiver to allow the deficit to rise above 3% in 2023.

“Parliament and the government can decide, but we must not play with this. This must be calculated carefully. I will only tolerate if it’s 3% plus” and not more than 4%, he said.

To be sure, the government, which has a bigger sway in determining policy, has said it would stick with existing proposals and keep deficit targets.

Last week, Luky Alfirman, the finance ministry’s head of debt office, said he believed the nation could soon control the coronavirus, allowing authorities to stick to their fiscal plans. Still, ratings agencies predict a wider fiscal deficit than the government’s 5.7% projection for this year.

Fitch noted there is a possibility the central bank may need to finance the fiscal deficit, which could hit market sentiment, policy credibility and sovereign ratings.

However, Nomura analysts expect central bank support in the bond market may again be needed. That would add downward pressure to the rupiah, which is already vulnerable to the risks of tighter US monetary policy.

For now, bond investors are not too worried, with benchmark 10-year yields hitting five-month lows this month, thanks mostly to a government decision to cut the rest of the year’s bond issuance target.

A handful of facilities in the US and Western Europe account for almost all the world’s mRNA vaccine supply, leaving many countries in a race to ...
World
2 months ago
Next Article