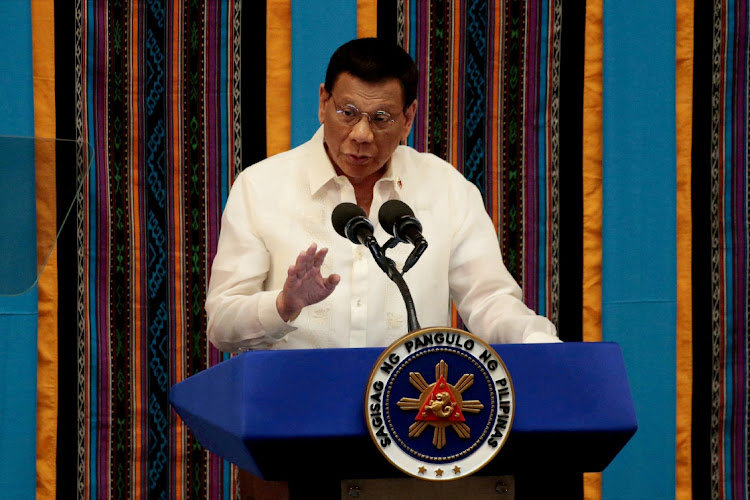 Philippine President Rodrigo Duterte is poised to capitalise on his popularity to push for pandemic recovery measures that could bolster his candidate in 2022’s election.

In his final annual address to Congress on Monday, Duterte is expected to urge legislators to pass bills to complete his tax agenda. Legislators will await Duterte’s directives on any further stimulus for pandemic recovery and on pending revenue bills, including proposed taxes on online casinos, House ways and means committee chair Joey Salceda said.

Senators will prioritise measures to further open the economy to foreign investors, Senate president Vicente Sotto said at a briefing on Monday. Meanwhile, the House will focus on 2022’s budget that will aid in the nation’s pandemic fight, speaker Lord Allan Velasco said in a speech.

Duterte has maintained majority support in Congress in the past five years, solidified during the 2019 elections. His popularity — which hit as high as 91% in the most recent poll — allows him to keep legislators on his side, said University of the Philippines political science professor Jean Franco.

“It’s really unusual for a president to be this popular near the end of his term,” said Franco, who specialises in legislative politics. “It gives the president a lot of leverage in terms of his relationship with Congress.”

The Philippines leader’s sustained appeal with voters will also be an advantage for his candidate in 2022’s presidential elections. Among his possible bets are his daughter, Sara, his aide, senator Christopher “Bong” Go and former senator Ferdinand Marcos.

“Duterte could use his state of the nation address to give hints as to the kind of candidate he will anoint,” Franco said. “He will also, of course, again be insulting and making remarks against his opponents.”

Businesses are hoping the president will use his political capital to pass laws that will attract more investments, including a measure simplifying taxes on financial services as well as changes to rules restricting foreign ownership.

“If there’s any legacy that the president will leave, it’s these structural changes in our business landscape that will make it more conducive,” said Francis Lim, president of Financial Executives Institute of the Philippines.

The issues that the public would like Duterte to tackle in his annual address include ways to create jobs, improve the economy and control inflation, according to results of a June survey by Pulse Asia Research released on Monday.

The Covid-19 pandemic plunged the Philippines into its worst recession and soured investor sentiment. Its main stock index was among the world’s worst performers among major benchmarks this year, while the peso earlier this month dropped to its lowest level in more than a year at over 50 against the dollar.

“Before we end our term, the Duterte administration will make sure that we help the next president and the next generations address fiscal and economic risks,” finance secretary Carlos Dominguez said last week.

Still, the upcoming elections could pose a challenge to approving these key economic measures with legislators expected to also spend time on their re-election bids, said Nicholas Antonio Mapa, senior economist at ING Groep in Manila.

“As we round out the final year of this presidency, it appears that legislators do have the ability to get important legislation off the ground,” Mapa said. “The question now is whether political dealings will delay this process as the polls are now less than a year away.”

Duterte’s daughter, Sara Duterte, who is mayor of Davao City, is also thinking of running, but her father says the presidency is not for women
World
3 months ago