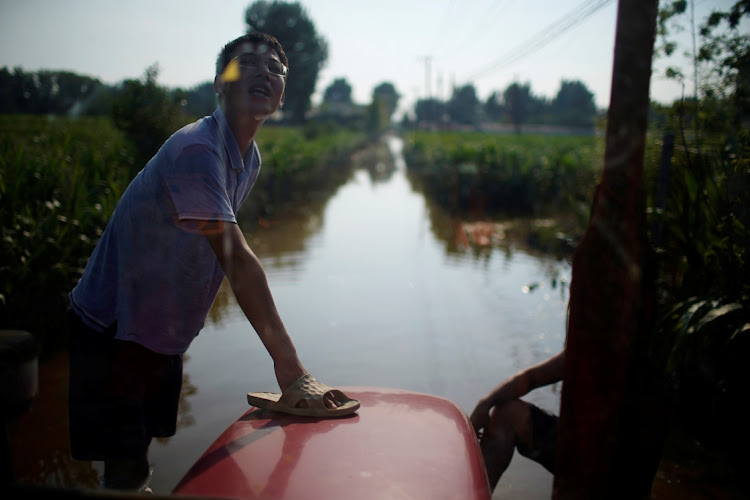 A man stands on a vehicle in a flooded farmland following heavy rainfall in Wangfan village of Xinxiang, Henan province, China, on July 25 2021. Picture: REUTERS/ALY SONG

Xinxiang — Chinese farmer Cheng wades through knee-deep water, pulling dead pigs behind him one-by-one by a rope tied around their ankles as he lines up the bloated carcasses for disposal.

More than 100 of Cheng's pigs drowned in floods that paralysed China's central Henan province last week, and the outlook for those left alive is bleak.

“I'm waiting for the water levels to go down to see what to do with the remaining pigs,” said the 47-year-old farmer from Wangfan village, about 90 kilometres north of provincial capital Zhengzhou.

“They've been in the water for a few days now and can't eat at all. I don't think even one pig will be left.”

Cheng's farm is one of thousands in Henan, famous for agriculture, and pork production in particular. The province was struck by heavy rains last week that sparked the worst flash flooding in centuries, catching many by surprise.

“In an instant, we now have no way of surviving. We have no other skills. We have no more money to raise pigs again,” Cheng, who has raised pigs all his life, told Reuters at his farm on Sunday.

“This is as if the sky has fallen.”

Across the village, where most of the 3,000 other residents also raise pigs or chickens or grow grain, people were clearing debris left by the receding floodwaters.

Some carted out wheelbarrows and crates of lifeless chickens. Dead pigs lay bloated in the water, tied to trees to stop them floating away. Parts of the village smelled strongly of mud and rotting carcasses.

At least 200,000 chickens and up to 6,000 pigs were lost in the flood, half of the village's herd, farmers told Reuters. Across Henan, rains have deluged 1,678 larger scale farms, killing more than a million animals.

Even after a devastating epidemic of the deadly pig disease African swine fever swept the country during 2018 and 2019, many farmers returned to pig raising and expanded their herds to capitalise on high prices.

Cheng said he's facing losses of about 30,000 yuan ($4,627), and worries he won't receive any government compensation.

Livelihoods aside, the flooding also has many worried about fresh disease outbreaks.

Last summer, heavy rain and flooding across southern China was blamed for dozens of outbreaks of African swine fever, a disease that usually kills pigs though is not harmful to people.

“The disease issue is a much more severe issue than the direct losses,” said Pan Chenjun, senior analyst at Rabobank.

The swine fever virus lives for about 10 days in pig faeces and water, and can survive for up to 100 days in manure pits.

“Whatever's in the manure pits will be washed out and spread around,” said Wayne Johnson, a veterinarian and consultant at Beijing-based Enable Ag-Tech Consulting.

Last week, the Ministry of Agriculture and Rural Affairs issued guidelines to local governments on how to prevent animal disease after flooding, including measures on disposal of carcasses and disinfection of farms.

For now though, Wangfan farmers are not even sure they'll return to farming.

“After doing this for so many years, in a flash, everything is gone,” said 53-year-old Zhang Guangsi, who lost about half his herd. “I don't feel like raising pigs any more.”

Potential technological solutions to prevent widespread flooding in cities include permeable asphalt and pavements, along with more green spaces and ...
World
2 months ago

From extreme flooding in China and Europe to wildfires in North America, the climate change writing is on the wall
Opinion
2 months ago