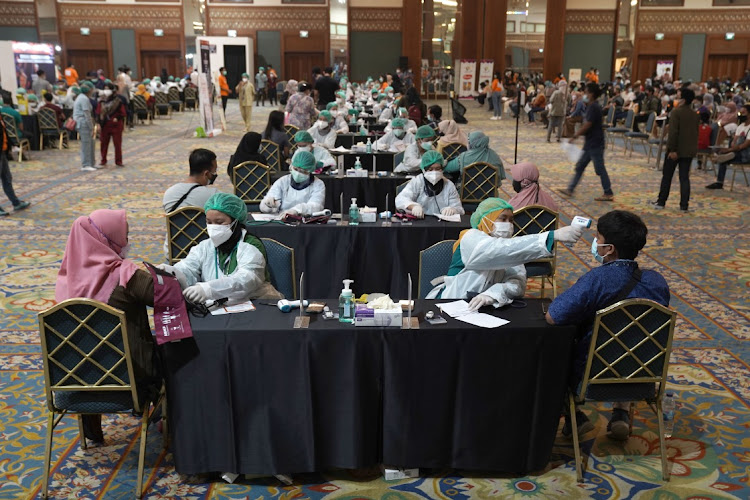 Jakarta — In the teeming, impoverished North Jakarta neighbourhood of Muara Baru, people have made a grim joke out of the acronym for the Indonesian government's lockdown to combat the coronavirus pandemic: PPKM.

More than half of Indonesia's population of 270-million spend less than $60 a month, the second highest level for “economically vulnerable” people in the world, economists say.

The pandemic has been a grinding descent towards poverty and hunger for many of them, the slow death encapsulated by Herdayati's sardonic joke.

A second wave of Covid-19 has overwhelmed Indonesia's health system, as infections surged fivefold in the past month. For the past week, Indonesia has averaged 49,435 new cases daily, and more than 1,000 deaths a day.

Currently nowhere in the world is being hit harder than Indonesia, even though experts say low rates of testing means the official data vastly underestimates the scale and toll.

Two people are dying with Covid-19 symptoms each day in Muara Baru, which has a population of about 6,000, said Eny Rochayanti, coordinator of the City Poor People Network, a volunteer group.

“It's a terrifying situation,” she said.

The government has cushioned the economic impact with a welfare package for the poor, without which the World Bank says 5-million more people could have fallen below Indonesia's poverty line of $32.59 per month last year.

The government also has plans for nearly 8,000 new hospital beds and measures to boost the number of health workers and oxygen supplies.

On Saturday, the minister leading the pandemic response, Luhut Pandjaitan, acknowledged the disproportionate impact on the poor, apologising “if it (government policy) is not optimal”.

Indonesia has rapidly urbanised over the past 20 years, without creating enough formal jobs to sustain the influx to the cities, says Arief Anshory Yusuf, an economist. Meanwhile, experts say, it has underinvested in a health system that relies heavily on private hospitals the poor can't afford.

“These people live in a compact environment where Covid-19 spreads easily,” said Arief. “Isolation is almost impossible. They can't access hospitals. They are very vulnerable to losing their incomes.”

The Indonesian Medical Association says the health system on Java, the most populous island in the archipelago nation, has “functionally collapsed”, prompting some communities to organise themselves to find whatever is needed to treat the sick.

When three members of an eight-person family living in crowded housing died within 10 days, Wahyudi and his team went all out to find treatment for the patriarch of the family, Muji.

“Whatever it takes, Pak Muji must survive,” he recalled telling the volunteers.

Turned away from six hospitals, eventually they got an assurance of a bed the next day. But before he could get there, Muji died.

“We were all devastated,” said Wahyudi. Now grappling with 500 active cases, he has set up a shelter so infected people can isolate to avoid a repeat disaster.

Those with money, connections and luck have the best hope of finding medical help, officials, social workers and victims' families told Reuters. Even then, because it usually takes days, the search often ends in tragedy.

For Irna Nurfendiani Putri, an 32-year-old IT industry professional, the hunt for a hospital bed in Jakarta for her brother Rachmat Bosscha, 44, succeeded only after the family brought their own oxygen tanks.

“Two people passed away in a 30-minute interval,” she said. “Then my brother got moved to their bed.”

With the intensive care ward full and the hospital's oxygen supplies continually running out, Irna had to repeatedly switch her brother over to portable oxygen tanks they had brought themselves.

“I can't blame the hospital because supplies are scarce,” she said. “But it was pretty harrowing watching my brother struggling to breathe.”

Asked by hospital staff to buy six bottles of remdesivir, a drug that inhibits the SARS-CoV-2 virus, the family found two, partly thanks to a cousin who was a doctor.

“We were still looking for the other four bottles but at 10am the hospital called my mum and told her that my brother had already passed away.”

Evi Mariani, publisher of a news website, also had a frantic weeklong ordeal after the oxygen saturation levels of her Covid-19 infected father, Ijan Sofian, plummeted. It took five days for Ijan to be admitted to hospital. He died two days later.

“I have to admit we got the hospital room for our father through a very privileged network of a relative,” she said.

“We are not rich people, but we are still able to work through the market mechanism. For the poor? It is a far more desperate situation because they have no money and no network.”

With the virus in the air in the cramped, hot alleys of Muara Baru, Herdayati says she can only heed a neighbour's hopeful advice: “Don't get sick, ma'am, just don't get sick.”

A handful of facilities in the US and Western Europe account for almost all the world’s mRNA vaccine supply, leaving many countries in a race to ...
World
2 weeks ago

An undervalued currency and prudent macroeconomic policies, plus lessons from India, should help the country survive
World
2 weeks ago
Next Article