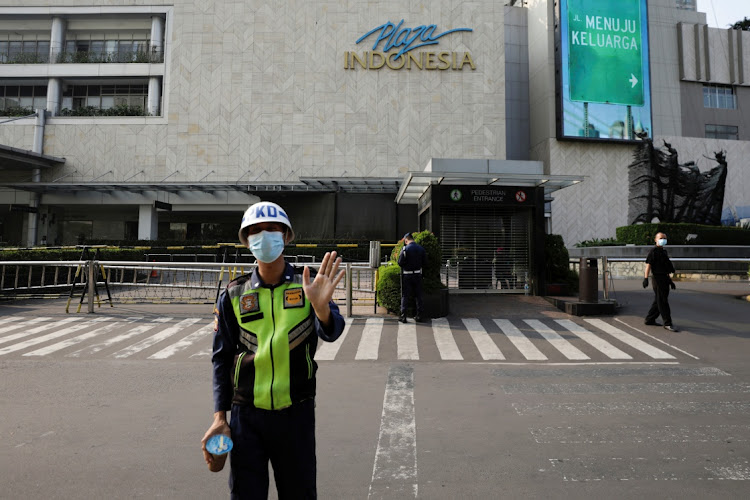 A security guard gestures outside the closed Plaza Indonesia shopping mall as Indonesia imposes emergency measures tightening restrictions in Java and Bali amid a surge in coronavirus disease on July 4 2021. REUTERS/WILLY KURNIAWAN

Melbourne — Indonesian investors are understandably worried about the potential impact of the spreading pandemic on their holdings. If the experience of India is any guide, they have some reason for confidence.

India’s bonds, currency and stocks were all beaten down earlier this year as the outbreak raged across the nation — but rebounded once an inflection point in cases was reached. Favourable positioning suggests Indonesia, which is now seeing daily infections exceed India’s, may be even better placed to bounce back once numbers level off.

The spread of the virus took a heavy toll on Indian assets, especially once the tally of new cases jumped to nearly 400,000 a day in April. The rupee was Asia’s worst-performing currency that month, sliding 1.3%, with declines worsened by concern the central bank’s bond-buying plans would add to a liquidity glut. The benchmark Sensex slid as much as 4.7% in April by the time it reached its intraday low on April 22.

India bonds slipped 0.4% during the month, weighed down by concern higher Covid-19 relief spending would worsen the fiscal deficit, and the disruption of supply chains would push up inflation. Bonds would have performed even worse without the debt-purchase programme and Federal-Reserve-style “Operation Twist”.

Confidence then returned as quickly as it was lost. Signs that case numbers were beginning to stabilise in late April saw investors return. Bonds gained 2.5% in May, the rupee rose 2% and the Sensex rallied 6.5%.

The pattern in Indonesia has been somewhat similar. New daily cases climbed to a record 54,517 on Wednesday, while the seven-day moving average jumped to 41,521 from less than 6,000 at the end of May.

While the market effect has so far been more muted than in India, Indonesia’s 10-year bond yield climbed 17 basis points in June, while the Jakarta Composite Index has fallen almost 3% from June’s high.

While waiting for case numbers to reach an inflection point, there are a number of other positives in Indonesia’s favour.

Finance minister Sri Mulyani Indrawati has stressed the government will shepherd Indonesia back to its fiscal rule of a 3% deficit-to-GDP cap by 2023, helping bolster bond-market sentiment. The currency was helped after central bank governor Perry Warjiyo said policymakers are effectively done with their easing cycle.

“The ongoing pandemic-related challenges would naturally present headwinds to Indonesian assets in the near term,” said Wellian Wiranto, an economist at Oversea-Chinese Banking in Singapore. “However, the authorities continue to offer market confidence that the overall stance of prudent macroeconomic policies will stay the course.”

Bank Indonesia has also played its part in helping to finance the government’s stimulus spending through debt purchases. The monetary authority now owns 22.9% of sovereign bonds outstanding, overtaking overseas investors as the largest holders, according to finance ministry data.

Positioning is also in Indonesia’s favour.

The decline in India’s rupee in April was compounded by the fact the currency was overvalued at the end of March, with a real-effective exchange rate at a 0.7% premium over the five-year average. In comparison, the rupiah is undervalued, with the same gauge at a discount of 3.7%.

Moreover, 12-month foreign inflows into Indian stocks were 3.9 standard deviations above the five-year average at the end of March, while in Indonesia’s case they are currently close to the five-year mean.

Futures rise as China, India and the US are all forecast to burn more coal this year
World
4 weeks ago