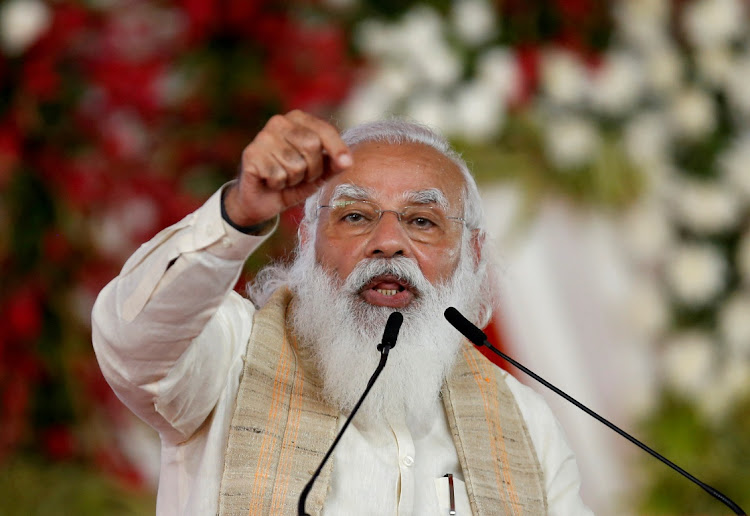 India’s Prime Minister Narendra Modi overhauled his cabinet in a bid to repair his dented image as the nation emerges from its devastating Covid-19 outbreak ahead of crucial state elections.

Fifteen cabinet ministers and 28 junior ministers were sworn in by President Ram Nath Kovind at a ceremony in the colonial-era president’s palace in New Delhi on Wednesday. This is Modi’s fourth cabinet change since coming to power in 2014 and the first in his second term.

Ahead of the reshuffle, health minister Harsh Vardhan, communications minister Ravi Shankar Prasad and information and broadcasting minister Prakash Javadekar were among 12 ministers who resigned, a statement from the president’s office said.

Vardhan was in charge of India’s Covid-19 strategy and came under fire as the country struggled to contain a devastating second wave of infections in April and May.

Modi’s usually unshakeable popularity fell as the country’s health infrastructure almost collapsed. Major cities ran out of oxygen, hospitals were overwhelmed with patients and crematoriums struggled to keep pace with the rising death toll. His government’s ratings dropped from 75% in 2019 to 51% in 2021, according to the LocalCircles polling company survey released May 29, providing one of the first indications that Modi’s enduring appeal with voters may be fading.

“This is an attempt at course correction and also suave attempt for political image building,” said Sandeep Shastri, a political analyst and vice-chancellor at the Jagran Lakecity University in Bhopal. “This rejig is also a method of political accommodation” with an eye to elections, particularly in Uttar Pradesh in 2022.

The states of Punjab, Uttarakhand, Goa and Manipur will also head to the polls in 2022. Modi’s Bharatiya Janata Party rules all these states except Punjab. Winning Uttar Pradesh is crucial for the party to retain power in the 2024 general elections.

Prasad’s resignation follows the government’s bruising legal fight with social media giants including Twitter and Facebook, while Javadekar, who was also the environment minister, exits his post at a time when there is growing pressure on India to zero out its greenhouse gas emissions ahead of China.

Mansukh Mandaviya, a 49-year-old politician from Modi’s home state of Gujarat, will lead the health ministry while and former bureaucrat and Wharton Business School alumnus Ashwini Vaishnaw will be the new minister for communications, electronics and information technology.

Sarbananda Sonowal, the former chief minister of Assam, is now the new minister for ports, shipping and waterways, while Jyotiraditya Scindia has been named civil aviation minister.

Ruling party loyalists Hardeep Singh Puri and Anurag Singh Thakur were among those elevated to cabinet rank, with Puri the new petroleum minister replacing Dharmendra Pradhan, who will head the education ministry. There was no change in the portfolios of home, defence, finance, agriculture, external affairs and road transport, according to a press statement from the president’s office.

Modi’s new cabinet is faced with the immediate challenge of boosting vaccine production to inoculate India’s large adult population, while also reviving the pandemic-hit economy, which is just showing signs of recovery after a record contraction.

Finance minister Nirmala Sitharaman on June 28 unveiled fresh aid, including an extension of the loan-guarantee programme, to cushion the economic impact of the pandemic. Most economists see the measures as falling short, forcing the Reserve Bank of India to stay accommodative for longer despite growing price pressures.

The middle class, the engine of the consumer economy, shrank by 32-million last year
World
3 weeks ago

Indian government says the social media company no longer has liability protection against user-generated content after failing to comply with new IT ...
World
4 weeks ago