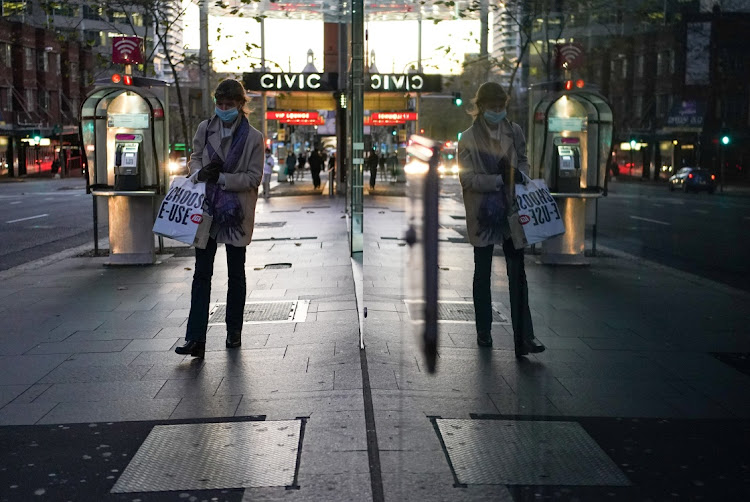 A woman wearing a protective face mask walks through the city centre during a lockdown to curb the spread of a coronavirus disease outbreak in Sydney, Australia on July 7 2021. Picture: REUTERS/LOREN ELLIOTT

Sydney — In 2020, when much of the world was in coronavirus lockdown, Australia was successfully hosting international cricket matches and tennis tournaments in front of packed crowds in a show of what post-pandemic life could look like.

But in recent weeks, new virus outbreaks, a chaotic vaccine rollout and a tightening of already strict curbs on international travel have rapidly reversed those fortunes.

Unlike 2020, business and consumer tolerance for the restrictions and uncertainty is quickly evaporating as Australians witness other countries reopen.

“We are one of only two countries in the world where the citizens aren't allowed to leave the country, and the other is North Korea, which is not one I’d want to be held up against,” said Rodger Powell, MD  at consultancy Tourism and Hospitality Services Australasia.

“There's an increasing ground swell of dissatisfaction and frustration with not being able to travel, with the complete lack of certainty,” Powell said.

Consumers, flush with cash, have been forced to cancel holidays within their own country as states shut their borders in response to even minor outbreaks.

Anger is growing around the lack of clarity on when Australia will allow international tourism and migration to resume. Companies regularly complain of labour shortages and universities are crying for international students to return.

The country's economy reopened earlier than expected in 2020 after curbing the virus. There are more jobs now than before the pandemic, house prices are hitting record highs and the construction sector is booming.

“The closure of the borders and the slow rollout of the vaccine is affecting people at a very personal level,” Lowe said. “It’s also affecting businesses ... but I do think we also need to remember that we will get through this and we need to be patient.”

The central bank concedes it will likely lag global peers in returning to pre-pandemic policy, with only about 9% of the country’s population vaccinated so far.

Neighbouring New Zealand, which also shut its borders and enjoyed early economic success during the pandemic, has also only vaccinated a small percentage of its population so far.

Businesses in New Zealand struggling with staff shortages this week staged a “lights out” protest, calling for border restrictions to be eased to allow in much-needed workers.

Australian Open tournament organisers worry players will not be willing to go through two weeks of hard quarantine in their Melbourne hotel rooms ahead of 2022’s Grand Slam.

Sydney resident Nicole Miller, a retiree, was so excited about the resumption of cruise trips in Australia, she booked five when they reopened.

“And bit by bit they have just all been cancelled, which is really disappointing because I’ve been so looking forward to getting back to cruise ships and that lifestyle again,” said Miller, who is not yet vaccinated but said she would be before embarking on a cruise.

She says she would welcome the idea of cruises that only allowed vaccinated people on-board.

Her views are echoed by business owners who hope faster immunisation would return some freedoms.

“I’m hoping the more we are vaccinated, the more it will allow us to be a little bit more liberal in our quarantine systems, our departure systems,” said Philip Koinis, Sydney-based director of Oxford Travel.

The bid, which would be Australia’s largest acquisition, reflects confidence in post-pandemic travel
Companies
4 weeks ago

Lambda pegged as a ‘variant of interest’, as opposed to a ‘variant of concern’, but this could change as scientists are alarmed by its unusual ...
National
4 weeks ago