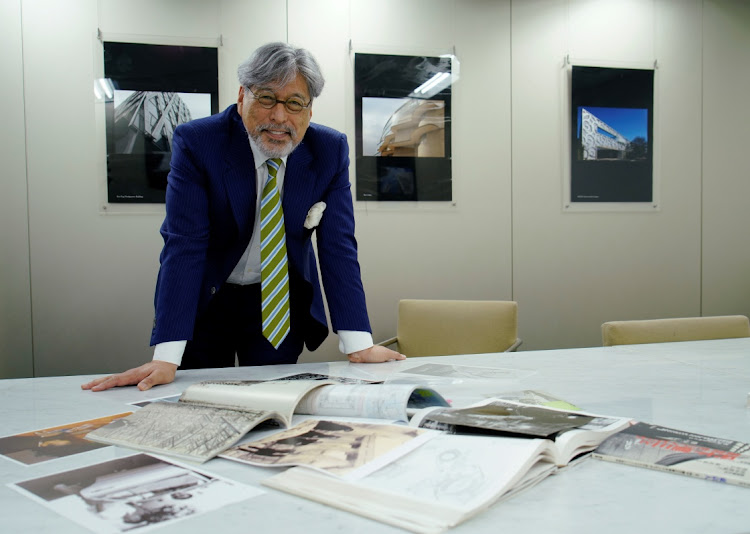 Tokyo — When Paul Noritaka Tange won the rights to design the Aquatics Centre for the 2020 Tokyo Olympics, one of the first things he did was to visit the grave of his father: the revolutionary Pritzker-winning architect, Kenzo Tange.

“I believe we’re the only father and son in the world to design the same Olympics venue — and a really strong feeling of respect for my father is part of why I wanted to do this.”

When the elder Tange built the Yoyogi National Gymnasium as a swimming arena for the 1964 Games, its bold floating roof and spires — evoking Japanese temples and suspension bridges — became a symbol of Japan’s triumphant return to the world stage after wartime defeat, helping to make Asia’s first Olympics a riotous celebration of resurrection and renewal.

But in 2021, Japan is an ageing nation that has struggled for years with economic malaise, and its crowded, high-rise capital is a very different place. Re-use and sustainability are the mantras under which Paul designed his venue for a Games overshadowed by the Covid-19 pandemic.

Still, Paul used principles learnt from his father, a workaholic often late for dinner, who enjoyed Jackie Chan and TV samurai dramas, and took his family on vacations to construction sites around the world.

“Our days were spent visiting Tange project construction sites. At meals, conversations were about architecture,” recalled Paul in a rare interview. “Before I really knew it, I wanted to follow the same path. It came naturally. After all, everything in daily life was architecture.”

Educated in Switzerland and at Harvard, the younger Tange joined his father’s firm upon graduation in 1985.

“From that point on, I came to see him as ‘the master’ and there was no way I’d ever exceed him. I’m pretty honest (with myself), so I knew even if I wanted to, I couldn’t win,” he said. “So I had to find my own way.”

Over the ensuing decades, the two worked and built together, Paul sometimes tasked by others in the firm with persuading his father into doing something he didn’t want to do, such as removing the diving platforms at Yoyogi, though the younger Tange has replicated them at his own pool “in homage”.

Despite Kenzo leaving his mark all over Tokyo, the Yoyogi Gymnasium remained the pinnacle of his fame in some ways. Designed in a year and built in 18 months, the venue was completed just over a month before the 1964 Games began.

But Kenzo had to overcome huge doubts to carry off the revolutionary design.

“There’s a photo of my father and a lot of men staring at a mock-up in his office. It seemed there was one proposal after another, and it took forever to decide,” Paul said. “Basically, he was aiming for a big space where spectators could see each other, a togetherness that would raise the excitement. Then that’d transmit to the athletes, and they’d get better results.”

With his own arena, the younger Tange put the same concept into play along with lines reminiscent of a bamboo forest — and asked swimmers what design tricks might make it a better place in which to swim and compete.

The biggest difference, though, is in attitude.

The elder Tange, who also designed the Hiroshima Peace Museum and the Tokyo Metropolitan Government Building, was nearly a “national architect”, with structures scaled to match, his son and other experts said.

Yoyogi is also informed by history, situated on what was once a military parade ground that housed US forces during the post-war occupation.

“I think the Yoyogi stadium actually serves as the best tool to understand what the 20th century meant for Japan,” said Saikaku Toyokawa, an associate professor of urban design at Chiba University.

“It encapsulates how Japan at times was at the centre of the world’s attention, how it wreaked havoc on others but also regretted its history.”