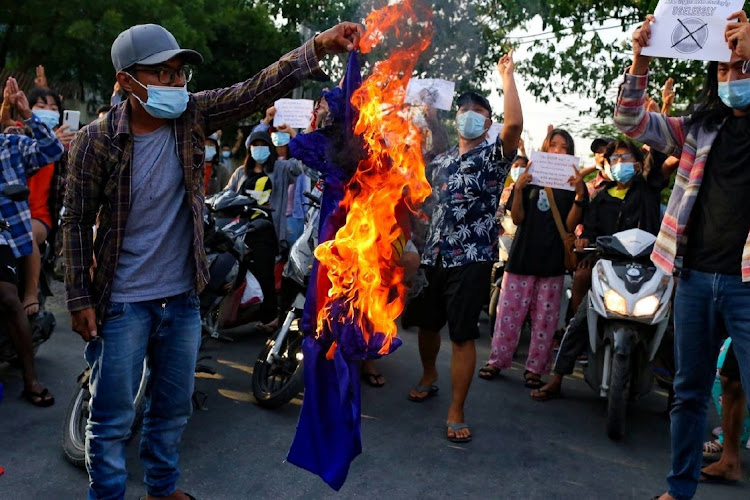 Protesters against Myanmar’s junta burn the flag of the Association of Southeast Asian Nations, in Mandalay, Myanmar, on June 5 2021. Picture: REUTERS

The Myanmar junta’s foreign minister defended its plan for restoring democracy, state media reported on Tuesday, after a meeting at which Southeast Asian counterparts pressed the army to implement a regional agreement meant to end turmoil.

The junta has paid little heed to demands from the Association of Southeast Asian Nations (Asean) to respect a “consensus” agreed in late April to end violence and hold political talks with its opponents.

Southeast Asian foreign ministers expressed disappointment at the meeting in China on Monday at the “very slow” progress made by Myanmar on its proposal for ending the turmoil since the army overthrew elected leader Aung San Suu Kyi on February 1.

State media cited junta-appointed foreign minister Wunna Maung Lwin as telling the Asean-China foreign ministers’ meeting that the military had made progress on its own five-step road map for the country unveiled after its coup.

“The minister apprised the meeting that the only way to ensure the democratic system that is disciplined and genuine was through the five-point future programme that was declared in February,” the Global New Light of Myanmar reported.

The minister had said that most of these points had been met including preventive Covid-19 measures and setting up a new election commission to look into alleged fraud during a November election swept by Suu Kyi's party, the paper said.

The military defended its seizure of power after a decade of tentative steps towards democracy saying the old election commission had ignored its complaints of fraud.

The junta has failed to impose control since ousting Suu Kyi, who is among more than 4,500 people detained since the coup.

The security forces have killed at least 849 protesters, a rights group says, though the army disputes that figure, and insurgencies in several regions have flared.

Alarmed by the turmoil, several members of Asean have called for the release of political detainees, an end to the violence and for Myanmar's rivals to hold talks on ending the crisis — calls reflected in the Asean “consensus”.

But in the only reference to the Asean proposal, the Myanmar minister was cited as saying “discussions were made cordially” on it during a visit last week by two Asean envoys who had also called for the release of political prisoners.

Opponents of the junta have shown increasing frustration at Asean’s inability to press the junta and its failure to include other political stakeholders, particularly the ousted government. The junta has branded its opponents “terrorists”.

After Monday’s meeting, Indonesia’s foreign minister Retno Marsudi said Chinese help would be “highly appreciated as this will contribute to achieving a peaceful solution”.

A shadow government formed by anti-coup opponents criticised China’s embassy in Myanmar for calling the junta chief the “leader” of Myanmar on a posting on its website.

The secrets charges are the most serious ones facing deposed Myanmar leader Aung San Suu Kyi, and could mean a 14-year jail sentence
World
1 year ago