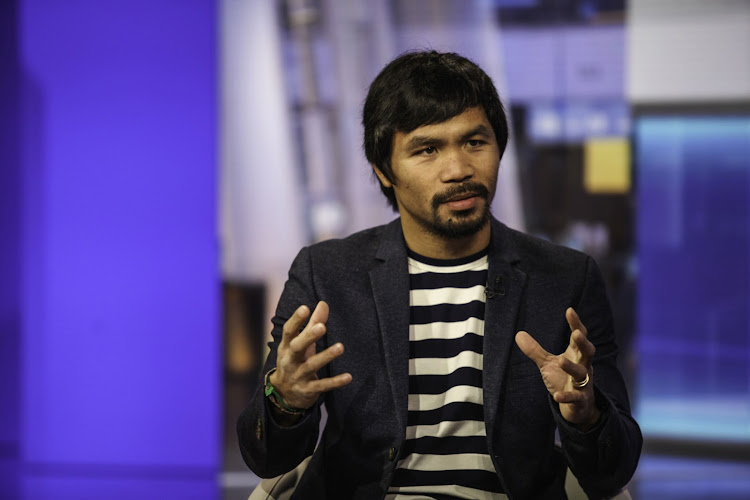 Professional boxer Manny Pacquiao speaks during a Bloomberg Television interview in New York, the US, on October 1 2015. Picture: BLOOMBERG/CHRIS GOODNEY

Singapore — Boxer-turned-politician Manny Pacquiao is emerging as an obstacle to Philippine President Rodrigo Duterte’s succession plans when his single six-year term ends in 2022.

Pacquiao, a loyal ally to Duterte since his shock election win in 2016, has rankled loyalists to the strongman leader since becoming acting head of the president’s ruling PDP-Laban party in December. Tensions spiked last week when Pacquiao urged members to ignore a meeting convened by a rival that called on Duterte to pick the party’s presidential candidate in 2022 and run for vice-president.

That party resolution opened the door for the 76-year-old leader to stay in a top government post as he looks to avoid criminal charges after he leaves office, a common occurrence in the Philippines. But it also complicates the presidential ambitions of Pacquiao, 42, who will be eligible to stand for the top job for the first time.

The boxer, who is set to fight undefeated rival Errol Spence Jr in Las Vegas on August 21, faces stiff competition for Duterte’s endorsement ahead of the May 2022 vote. Other prospective candidates include Sara Duterte, the president’s daughter, as well as his aide senator Christopher “Bong” Go and Ferdinand “Bongbong” Marcos Jr — the only son of the former Philippine dictator.

Yet due to Pacquiao’s star power and wealth, he may be the one candidate who could mount an independent campaign if Duterte backs someone else. And given both hail from southern Philippines, a competition between their camps risks splitting the vote and opening the door for opposition figures to take the presidency.

“Duterte will want to make sure he avoids potential legal action against him after leaving office, so obviously he has a clear interest in making sure that his person is the next president,” said Peter Mumford, Southeast and South Asia practice head at risk consultancy Eurasia Group. “Pacquiao actually could have a shot even without Duterte’s blessing,” he added. “Parties are not that important in Philippine elections — it’s about individuals.”

A survey released in April from Pulse Asia Research, one of the most credible in the Philippines, found Sara Duterte was the public’s top choice to be the next president. Pacquiao was in a statistical tie for second with Marcos Jr, Manila mayor Isko Moreno and senator Grace Poe.

In 2016, when Pacquiao allied with Duterte, he defended the revival of the death penalty for heinous crimes and backed Duterte’s deadly campaign against illegal drugs, which saw thousands of extrajudicial killings. Yet lately the boxer has sought to distinguish himself from the president.

In late April, Pacquiao said he wrote a letter to the Chinese ambassador asking him to withdraw his country’s ships in Philippine-claimed parts of the South China Sea, and later described Duterte’s response to the crisis as “lacking”. Pacquiao also sent US President Joe Biden a letter through the embassy requesting to facilitate early delivery of Moderna’s Covid-19 vaccines.

Pacquiao hasn’t yet declared his intention to run in the May elections. Calls to his office weren’t returned. During a speech to the Senate on Wednesday he said the party should focus on the epidemic and power shutdowns in the capital, Manila, rather than politics.

Harry Roque, a spokesperson for Duterte, dismissed any notion of a rift between the two men. “I don’t think there is a falling out,” he said at a briefing in May. “Until now, the president remains to be a huge fan of senator Pacquiao in terms of strength and in the field of boxing. Let’s leave it at that.”

On Thursday, he said Pacquiao is among at least five politicians Duterte is considering supporting in the next elections. He may also decide to back Go, Marcos, Moreno or Sara Duterte, though he still doesn’t want his daughter to run for the top job, Roque said.

Still, some in the party have questioned Pacquiao’s leadership role, leading to the internal spat last week. Raul Lambino, a senior party official, said Pacquiao was never elected as party president even while vowing to support the boxer if he were ever voted in.

The manoeuvring will likely continue until candidates must formally file to run in October, according to Edmund Tayao, executive director of the Local Government Development Foundation and a faculty member of the Ateneo School of Government.

“The administration, the party and the president himself are keeping options open,” he said.

Covid-zero countries urged to increase vaccinations to avoid being ‘hermit’ ...

Covid-zero countries urged to increase vaccinations to avoid being ‘hermit’ ...