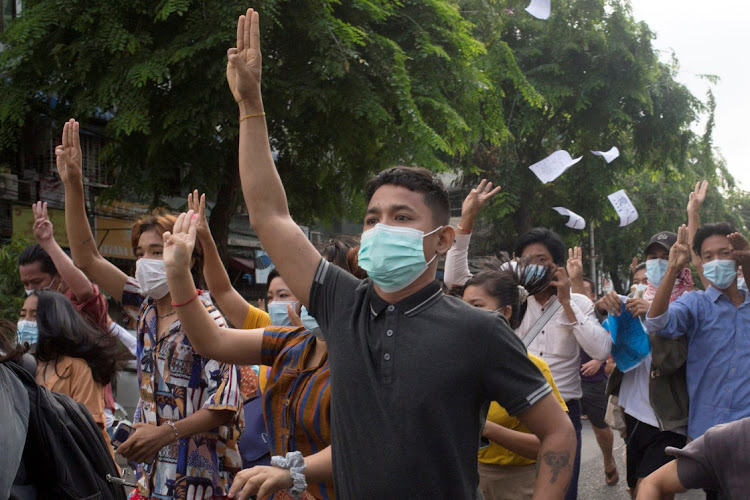 Diplomacy intensified with Myanmar’s junta on Thursday as the head of the International Red Cross (ICRC) met with army ruler Min Aung Hlaing and two Southeast Asian envoys arrived for talks on ending the turmoil since the February 1 coup.

The EU’s foreign policy chief, meanwhile, told Reuters the bloc planned to impose a new round of sanctions on the ruling generals and their economic interests in the coming days.

Myanmar has sunk into chaos since the coup overthrew elected leader Aung Suu Kyi. At least 845 people have been killed by security forces and more than 4,500 jailed, according to an activist group. Anti-junta protests flare daily, ethnic conflicts have resurged and the economy is paralysed by strikes.

ICRC president Peter Maurer was the most senior representative of an international organisation to travel to the capital Naypyidaw to meet Min Aung Hlaing, whose critics say he should be denied international recognition.

"People in Myanmar are in need of urgent assistance and protection," Maurer said, according to an ICRC statement.

He had brought up "the use of force during security operations" and had made the case for better humanitarian access to conflict areas and for the resumption of Red Cross prison visits. Suu Kyi, 75, is herself being tried on various charges.

Reuters was unable to reach the junta's spokesman for comment.

The junta chief was "noncommittal" but he had not refused Maurer’s request, the Nikkei news service said, citing people familiar with the meeting.

The junta has said its measures are restrained against those it brands a threat to state security. It says the death toll is lower than those given by rights groups and the UN.

The main international diplomatic effort has been led by the Association of Southeast Asian Nations (Asean).

But there has been little sign of progress since the 10 member countries, Myanmar among them, said at the end of April they had reached a 'consensus' to try to end the crisis — which included political talks and putting a stop to bloodshed.

Killings have continued and instead of talking to a rival underground government, the junta has branded it a terrorist group.

Two Asean envoys had arrived and were expected to meet Min Aung Hlaing on Friday, the local Delta News Agency reported. They are Erywan Yusof, the second minister for foreign affairs for Brunei, Asean’s chair this year, and the bloc’s secretary-general Lim Jock Hoi, also from Brunei.

The UN, Western countries and China have all backed Asean’s mediating role, but some Western powers have also imposed increasing sanctions to target the junta members and their economic interests.

"There is a third row of sanctions in preparation that will be approved (in) the coming days," EU foreign affairs chief Josep Borrell said on Thursday during a visit to Jakarta.

Neither sanctions nor diplomacy nor the increasing violence have had an obvious impact on the junta, which argues that the coup which ended 10 years of tentative democratic reforms will bring a "disciplined democracy".

The army took power after the former electoral commission rejected its accusations of fraud in a November election swept by Suu Kyi’s party.

About 400 pro-democracy supporters took to the streets of downtown Yangon on Thursday to stage one of the biggest recent demonstrations against military rule in Myanmar’s commercial hub and largest city.

"We gathered at the protest today in order to show that we won't allow them to rule us," Zayar Lwin, an activist and former political prisoner who attended the rally, said.

Suu Kyi, who has been detained since the coup in February, appears for the first time in person to meet her legal team
World
1 year ago
Next Article