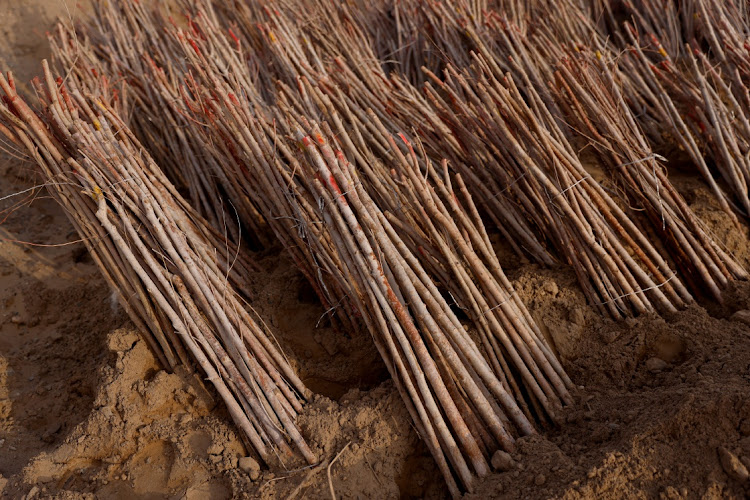 Piled tree shoots lie on the ground waiting to be planted, at the Yangguan state-backed forest farm, on the edge of the Gobi Desert on the outskirts of Dunhuang, Gansu province, China, on April 13 2021. Picture: REUTERS/CARLOS GARCIA RAWLINS

Wuwei — After a hard morning planting fresh shoots in the dunes on the edge of the Gobi Desert, 78-year-old farmer Wang Tianchang retrieves a three-stringed lute from his shed, sits down beneath the fiery midday sun, and starts to play.

“If you want to fight the desert, there’s no need to be afraid,” sings Wang, a veteran of China's decades-long state campaign to “open up the wilderness”, as he strums the instrument, known as the sanxian.

Tree-planting has been at the heart of China’s environmental efforts for decades as the country seeks to turn barren deserts and marshes near its borders into farmland and screen the capital Beijing from sands blowing in from the Gobi, an 800,000km² expanse stretching from Mongolia to northwest China, which would coat Tiananmen Square in dust nearly every spring.

But in March, heavy sandstorms hit Beijing for the first time in six years, putting the country’s reforestation efforts under scrutiny, with land increasingly scarce and trees no longer able to offset the effect of climate change.

Now a local institution in northwest China’s Gansu province, Wang and his family lead busloads of young volunteers from the provincial capital of Lanzhou into the desert each year to plant and irrigate new trees and bushes.

Their painstaking work to rehabilitate marginal land has been promoted as an inspiration for the rest of the country, and they are the subject of government propaganda posters celebrating their role in holding back the sand.

Over the last four decades, the Three-North Shelter Forest Programme, a tree-planting scheme known colloquially as the “Great Green Wall”, has helped raise total forest coverage to nearly a quarter of China’s total area, up from less than 10% in 1949.

In the remote northwest, though, tree-planting is not merely about meeting state reforestation targets or protecting Beijing. When it comes to making a living from the most marginal farmland, every tree, bush and blade of grass counts — especially as climate change drives up temperatures and puts water supplies under further pressure.

“The more the forest expands, the more it eats into the sands, the better it is for us,” said Wang's son, Wang Yinji, 53, who has taken over much of the back-breaking farming and planting while his father recovers from illness.

Holding down the sand

In a battered jeep loaded with a water tank and flying a large Chinese national flag, the Wang family have been planting the spindly “huabang” in the rolling dunes.

The flowering bush known as the sweetvetch has an 80% success rate even in harsh desert conditions and has become a key part of efforts to “hold down the sand”, a term used locally for planting bushes and grasses in even squares across the desert slopes to stop sand drifting into nearby farmland.

The Wangs have been fighting desertification since they settled on barren land near the village of Hongshui in Wuwei, a city in Gansu close to the border with Inner Mongolia, in 1980.

Their home is now surrounded by patches of rhubarb and rows of pines and blue spruces. Twenty bleating goats are locked in a wooden paddock nearby to stop them devouring the precious vegetation.

The family’s 1.6ha of farmland are protected on one side by a forest planted about a decade ago, and on the other by a long sandy cliff.

Trees have become a major part of the local economy. Hongshui is dominated by a large state-owned commercial forest estate called Toudunying.

“After 1999, when the tree-planting sped up, things got much better,” Wang Yinji said, referring to the state-led reforestation initiative. “Our corn grew taller. The sand that used to blow in from the east and northeast was stopped.”

Experts say China’s reforestation work has become more sophisticated over the years, the government benefiting from decades of experience and able to mobilise thousands of volunteers to plant trees, emulating front-line pioneers like the Wangs.

But the fight is far from over, they add, with climate change set to worsen conditions for farmers living in the arid north.

“They have been living in similar conditions for generations,” said Ma Lichao, China country director for the Forest Stewardship Council, a non-profit organisation promoting sustainable forest management. “But it is very important to say that climate change is something very new.”

China plans to increase total forest coverage from 23% in 2020 to 24.1% by 2025, but the constant expansion has masked many underlying problems.

“There’s been relatively low survival of trees in some regions, and discussions about the depletion of underground water tables,” said Hua Fangyuan, a conservation biologist who focuses on forests at China’s Peking University.

Struggling to find space for new trees, the government of an administrative division in Inner Mongolia was accused in 2019 of seizing farmland to meet forest coverage targets set by Beijing. Artificial monocultural plantations, such as rubber, have also been created at the expense of natural forest, according to some studies.

“This [competing land-use pressure] is a problem not just for China but all over the world,” said Hua. “We are talking about millions of hectares of targets. With the growing population, there is going to be competition and tension.”

This competition for land has been reinforced by China’s reliance on government-backed industrial-scale plantations to meet targets, though it is gradually shifting to a more nature-based approach to reforestation.

One such state-backed forest farm designed to repair the region’s overworked ecosystem is the 1.7ha Yangguan project, on the outskirts of the city of Dunhuang, which has proven controversial.

Leaseholders eager to plant lucrative but water-intensive grapes levelled large sections of forest in 2017. In March, a government investigation team found Yangguan had violated regulations by allowing vineyards to be planted in protected forest. Villagers were also accused of illegally felling trees, and authorities were ordered to reclaim the illegally occupied land.

Officials on the estate said hundreds of staff from government agencies in Dunhuang would arrive soon with the aim of planting 31,000 trees on 37ha of land in just four days. Gradually the surviving vineyards would be replaced with trees, a manager said, a move that would affect hundreds of farmers.

“The government and the farmers should work together to find a way to make money and ensure the water levels are sustainable at the same time,” said Ma of the Forest Stewardship Council.

There are signs that China has learnt from past mistakes, when trees were planted — often by scattering seeds from military aircraft — with no consideration for existing ecosystems or weather conditions, meaning many failed to take root.

The government is now more careful in which species it selects to plant, and more inclined to make room for natural forests to expand, rather than create artificial plantations.

But with local governments under pressure to grow the economy and guarantee food supplies, China’s tree-planting may also be reaching a point of diminishing returns.

“It’s getting more and more difficult to really increase the forest coverage rate simply because there aren’t so many places left for big reforestation projects,” said Ma.

Ma said the sandstorms that hit Beijing in March did not mean planting trees had failed, but showed it would no longer be enough to offset the effect of climate change.

“To be honest, I don’t think the trees can help the situation,” he said.

At a briefing last week, Li Jianjun of the China National Environmental Monitoring Centre said temperatures in Mongolia and Inner Mongolia have been 2-6°C higher than normal since February, with the melting snow exposing more sand to the wind.

Some of the farmers in Wuwei have begun to lose hope after decades trying to subdue the deserts.

Ding Yinhua, a 69-year-old shepherd, said the sandstorms were so severe that sometimes she didn’t dare open her eyes.

Despite the tree-planting, pastures have deteriorated in recent years as a result of declining rainfall in the spring and summer, she added.

“It’s just no good without rain. We don’t have land so there’s no other way: we just herd sheep. In 2015 and 2016, there was rain but since then there’s been nothing, and you now have to wait until September,” she said.

Her husband, Li Youfu, 71, said he thought tree-planting had made no difference at all.

“The sand is still moving. This can’t be controlled,” he said. “When the wind comes, it’s usually really strong. No-one can stop it.”

WANDILE SIHLOBO: SA heads for another bumper year as yields rise and demand ...

WANDILE SIHLOBO: SA heads for another bumper year as yields rise and demand ...