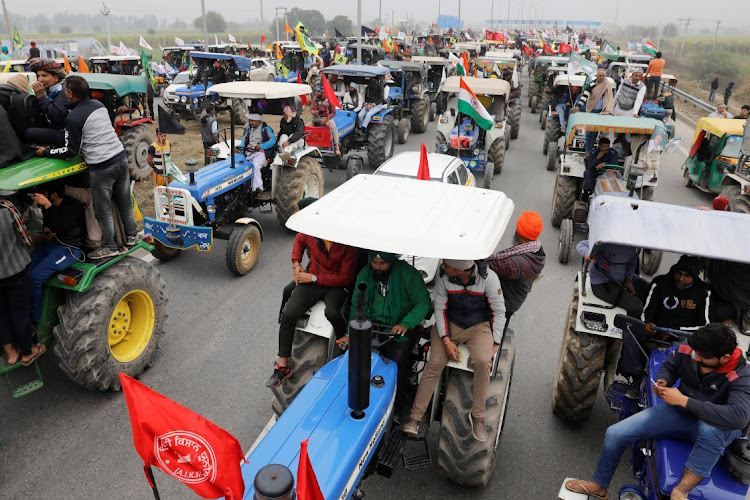 Farmers participate in a tractor rally to protest against the newly passed farm bills on a highway on the outskirts of New Delhi, India, January 7 2021. Picture: REUTERS/ADNAN ABIDI

Indian farmers are expected to expand planting of major crops such as rice, maize and soybeans after the national weather forecaster predicted bountiful rains during the June-September monsoon season.

The India Meteorological Department maintained on Tuesday its earlier forecast of a normal monsoon, which waters more than half of the country’s farmland. Cumulative rains are likely to be 101% of the long-term average during the four-month period, Mrutyunjay Mohapatra, director-general of the weather bureau, said at an online media briefing. That compared with its April prediction of 98%.

The forecast has a margin of error of 4%, the IMD said.

A normal monsoon season is critical for India’s crop output and economic growth at a time when the country is battling the world’s worst outbreak of Covid-19. The virus has spread to rural areas, where about 70% of the nation’s more than 1.3-billion people live. Agriculture accounts for almost a fifth of India’s economy, which contracted an unprecedented 7.3% in the year ended March.

“We still need to wait for the monsoon’s spatial distribution pattern, but a normal rainfall season for a third year in a row would be a supporting factor for India’s agriculture and economy,” said Rahul Bajoria, Mumbai-based chief India economist at Barclays. “Given the spread of Covid in rural areas, a normal monsoon could prove to be a critical mitigating factor for restoring economic normalcy, both in terms of income and inflation.”

The weather office said that this year’s rains are expected to be well distributed throughout the country, with most parts seen receiving normal to above-normal rainfall during the season.

The probability of a normal monsoon is 40%, while the chance of below-normal showers is 18%, it said. There is an 8% possibility of deficient rains, the bureau said.

About 60% to 90% of annual rainfall occurs during the monsoon period over different states. Farmers generally start planting of crops such as grains, cotton, soybeans, peanuts and sugar cane after the arrival of the monsoon. Any deficit in rains during the early part of the season could delay sowing and hit harvests, even if the monsoon gathers pace later.

Last year’s monsoon rainfall was 9% higher than normal, while it was 10% more than the average in 2019. Bountiful rains helped crops and boosted India’s food grain output to a record in 2020/2021.

This year’s monsoon is expected to hit the southern state of Kerala on Thursday, according the weather office. It had earlier predicted an onset date of May 31 for the rainy season, which typically starts on June 1.

Nissan, which owns a majority stake in the plant, has denied workers’ allegations of not adequately sticking to safety protocols
World
1 week ago

Elephantiasis, which is preventable but not curable, is rife in India, but the drugs cannot get to communities and patients due to the pandemic
World
2 weeks ago
Next Article