Police cite coronavirus restrictions on gatherings larger than four people, but some pro-democracy groups contend they are just stifling dissent 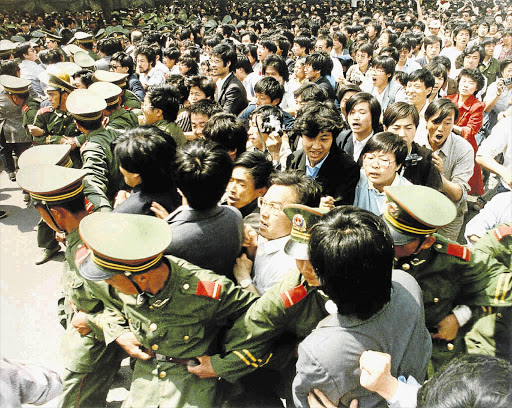 A Beijing citizen stands in front of a column of tanks on the Avenue of Eternal Peace in this iconic photo taken during the crushing of the Tiananmen Square uprising. Picture: REUTERS

Hong Kong — Hong Kong authorities have blocked democracy advocates from holding a candlelight vigil for victims of the 1989 Tiananmen Square crackdown for the second year in a row.

Police denied an application for a permit to hold a public gathering on June 4 in the city’s Victoria Park, said the organiser, the Hong Kong Alliance in Support of Patriotic Democratic Movements of China. Police cited coronavirus restrictions on gatherings larger than four people, measures that pro-democracy groups contend are being used to stifle dissent.

The Hong Kong police didn’t immediately respond to a request for comment. The decision was first reported by the Ming Pao newspaper.

The refusal to grant a permit gives police the power to criminally charge organisers and attendees if the protest goes ahead. Last year, thousands assembled to commemorate the day, skirting metal barricades to congregate in the park.

In 2019, the Tiananmen vigil drew more than 180,000 participants to the park, according to the organisers — making it the largest turnout since the vigils began in 1990. Police estimated a smaller crowd, saying 37,000 attended at its peak.

The events of 1989 have particular resonance in Hong Kong. The city’s memorial is the only one allowed on Chinese soil, since China’s Communist Party has forbidden any kind of memorials and has virtually scrubbed the events from history books and the internet.

The crackdown unfolded after the UK government signed the 1984 Sino-British Joint Declaration that paved the way for Hong Kong’s return to Chinese rule, and ahead of the formal handover in 1997 — spooking residents worried about the city's future.