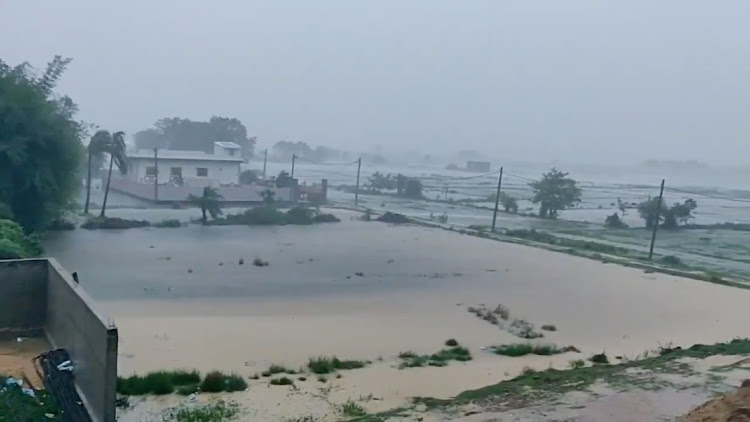 Bhubaneswar — Storm surges inundated dozens of villages in eastern India on Wednesday after a cyclone moved inland from the Bay of Bengal, damaging thousands of mud homes in two coastal states and killing at least one person, officials said.

Cyclone Yaas was packing gusts of up to 140km/h as it made landfall, days after another storm tore up the western coast, triggering mass evacuations and piling pressure on authorities battling a deadly second wave of the coronavirus.

Authorities said more than 1-million inhabitants had been moved out of the storm’s path and the busiest regional airport, in the city of Kolkata, had been shut until Wednesday evening.

In the eastern state of Odisha’s Balasore district, where the storm struck early on Wednesday, authorities said 46 villages along the coast had been flooded.

“Most of the villages were empty. The total population would be around 10,000,” K Sudarshan Chakravarthy, the district’s top government official, said.

“A large number of villages are under water,” she said.

At least one person had died in the state after a house collapsed, Banerjee said.

“I have not seen anything like this before,” said another state minister, Bankim Hazra, after seawater gushed into low-lying areas of Sagar island in the Bay of Bengal and the tourist town of Digha, where a police station was flooded.

“Successive high tides battered the coastline,” he said. “It is inundation all around and villages are cut off.”

Cyclones in the Bay of Bengal are common at this time of year, and often roar ashore, bringing death and destruction to the coastal areas of both India and neighbouring Bangladesh.

The devastating wave of virus infections complicated storm preparations. Odisha officials said they had suspended testing, vaccination and a door-to-door health survey in the three districts in the storm’s path.

Weather officials in Bangladesh said the storm was likely to swamp low-lying areas of 14 coastal districts, bringing tides more than 1m higher than normal. They advised fishing boats and trawlers to stay in shelter.