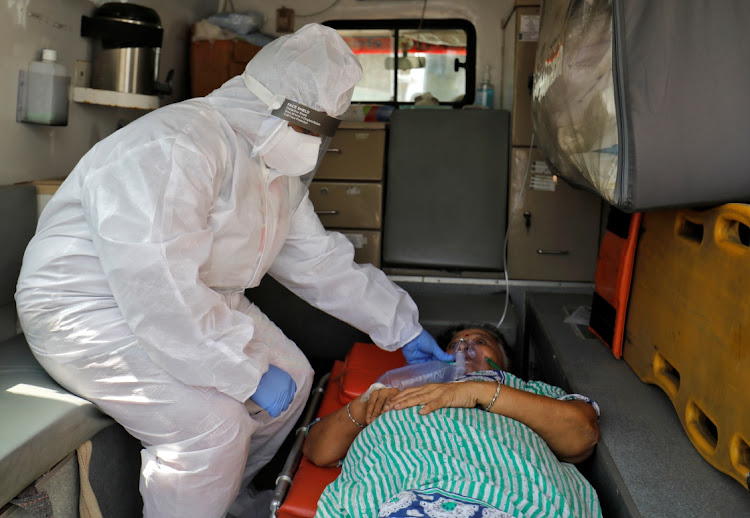 New Delhi — India’s new coronavirus cases dipped marginally on Sunday but deaths from Covid-19 jumped by a record 3,689, with one more state going into lockdown as the nation’s creaky health-care system is unable to cope with the huge caseload.

Indian hospitals, morgues and crematoriums have been overwhelmed as the country has reported more than 300,000 daily cases for more than 10 days straight. Many families have been left on their own to scramble for medicines and oxygen. Dozens of people have died in the past week due to shortage of oxygen in hospitals in Delhi alone.

Nearly 10 Indian states and union territories have imposed some form of restrictions, even as the federal government remains reluctant to impose a national lockdown.

The eastern state of Odisha became the latest to announce a two-week lockdown, joining Delhi, Maharashtra, Karnataka and West Bengal. Other states, including Uttar Pradesh, Telangana, Assam, Andhra Pradesh and Rajasthan have either imposed night curfews or weekend lockdowns.

The Indian Express newspaper reported on Sunday that the country’s Covid-19 task force has advised the federal government to impose a national lockdown.

Last month Indian Prime Minister Narendra Modi said all efforts should be made to avoid a lockdown.

The federal government fears another lockdown will have a devastating impact on the economy. The lockdown imposed in 2020 after the first Covid-19 outbreak led to job losses as economic output fell a record 24% in April-June 2020 compared with the same period a year earlier.

The big spike in cases has also led to a shortfall in medical staff and, according to media reports, the government is planning to incentivise medicine and nursing students for helping in Covid-19 facilities.

With India’s health system reeling and absenteeism from the workplace soaring — as staff fall ill or take care of relatives —international aid has begun pouring in.

Countries including the US have shipped in critical oxygen equipment, therapeutics and raw materials for vaccine production.

Modi’s government has been criticised for letting millions of largely unmasked people attend religious festivals and crowded political rallies in five states through March and April. Daily cases in these states have spiked since then.

Reuters reported on Saturday that a forum of scientific advisers set up by the government warned Indian officials in early March of a new and more contagious variant of the coronavirus taking hold in the country.

Air India plans to up weekly options to the US, while Korean Air and Asiana Airlines will charter aircraft
World
7 months ago

As the enormity of India's challenges shook the world, Indian-origin technology industry czars have extended help
Business
7 months ago