Staff had ridden out storm by working at home, but now bosses want them back at the office 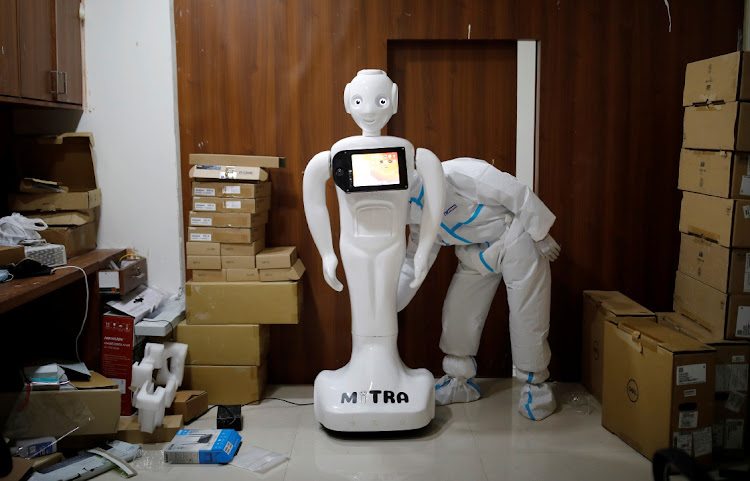 A Mitra robot is put on charge at a hospital in Noida, on the outskirts of New Delhi. Picture: REUTERS/ADNAN ABIDI

Bengaluru — India’s giant IT firms in Bengaluru and other cities have set up Covid-19 “war-rooms” as they scramble to source oxygen, medicine and hospital beds for infected workers and maintain backroom operations for the world’s biggest financial firms.

Banks including Goldman Sachs and Standard Chartered, who run much of their global back office operations from large office parks in Bengaluru, Chennai or Hyderabad, have put in place the infrastructure to vaccinate thousands of employees and their families, when age restrictions are lifted on May 1.

Workers at huge technology service providers Accenture and Wipro say teams are working 13-14 hours daily, under growing pressure and struggling to deliver on projects as staff call in sick and take time off to care for friends and relatives.

They play down any threat of a collapse in operations — but at stake if the surge continues is the infrastructure put in place by the world’s biggest financial companies in cost-cutting drives that have left them deeply reliant on the big Indian offices.

“Employees have contracted Covid-19 since the second wave began, causing severe pressure for projects that are nearing deadlines,” said one employee at Accenture, asking not to be named because he was not authorised to speak to the media.

Five other sources at Accenture confirmed the growing issues with pressure of work. Accenture said it is providing some medical care and covering the cost of vaccinations for its employees but did not comment on the effect on productivity. Wipro did not immediately respond to requests for comment.

India’s second wave of infections has seen at least 300,000 people test positive each day for the past week, overwhelming healthcare facilities and crematoriums and driving an increasingly urgent international response.

Asia’s IT capital Bengaluru, desperate to calm a daily infection rate five times higher than in last year’s first wave, on Monday ordered a full lockdown that allows ordinary residents to leave their homes only briefly between 6am and 10am.

Local IT managers say they struggled to get global chiefs outside India to recognise the seriousness of the outbreak.

India’s gigantic IT and call centre service industry employs more than 4.5-million people directly and relies substantially on thousands of graduates under the age of 30.

They are paid a fraction of western salaries and had largely ridden out the Covid-19 pandemic working from home until the relaxing of restrictions in recent months spurred companies to call more employees back to the office.

Managers at Goldman Sachs’ massive complex in Bengaluru, for example, told staff in early March to prepare to return to full-scale office working.

CEO David Solomon said then that the bank owed it to its incoming class of analysts and interns to have them come to work in offices for at least part of the summer.

The company quickly U-turned, sending all but essential employees home on March 27 as cases began to rise.

New strains of the virus have since sent India’s case numbers soaring to global records and brought more infections among younger Indians.

But all 15 of the large companies Reuters spoke to this week said that they now had vaccination schemes in place and several outlined Covid-19 “war-rooms” they had launched to support staff and secure oxygen and other supplies.

"The problem was that those outside India were anxious not to be seen to be jumping the queue," says a senior manager who runs a workforce of more than 600 staff at a global bank in Bengaluru, asking not to be named.

“The India CEO and others here said: we don’t care what it looks like, people are dying.”

About 250 Twitter accounts, including those of journalists and activists, were blocked for several hours over claims they spread rumours about the ...
World
3 months ago
Next Article