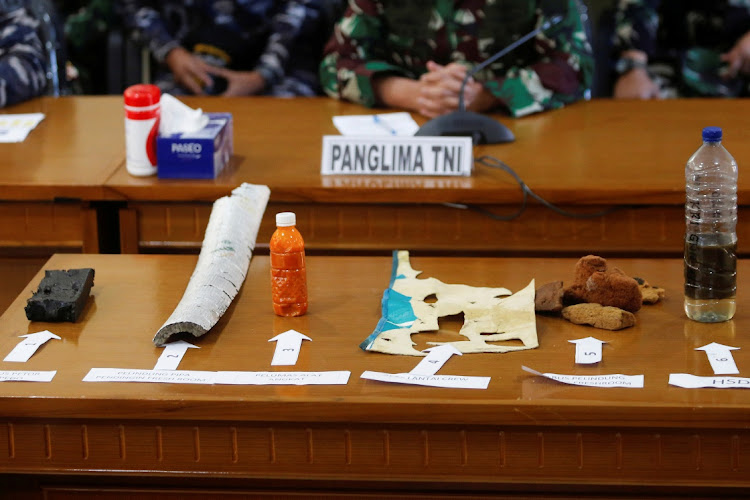 Debris from the Indonesian Navy KRI Nanggala-402 submarine are displayed during a media conference at Ngurah Rai Airport in Bali, Indonesia, on April 24 2021. Picture: REUTERS/JOHANNES CHRISTO

Banyuwangi/Jakarta — The Indonesian navy was on Monday trying to work out how it could salvage the remains of a submarine from the bottom of the Bali Sea and retrieve the bodies of the 53 sailors who died on-board.

The German-built KRI Nanggala-402 was discovered lying on the seabed on Sunday broken into at least three parts, four days after it lost contact while preparing to conduct a torpedo drill.

Grieving relatives gathered on the seashore in Bali on Monday to pay their respects to the sailors who perished, and urged the authorities to bring up their bodies from the depths.

Experts say it will be a daunting task to lift the submarine to the surface from the deep water, requiring specialised salvage equipment.

A spokesperson for Indonesia’s navy said a retrieval operation was still being discussed with experts and international bodies.

“We will analyse the underwater pictures and video, the current and so on to decide the technology that will be used,” First Admiral Julius Widjojono said.

A sonar scan detected at least three parts of the submarine at a depth of 850m, far beyond Nanggala’s diving range.

Relatives of crew member I Gede Kartika congregated at Celukan Bawang on Bali’s north coast on Monday. Some carried incense and flowers as they clutched framed photographs of him in his naval uniform. Others rowed out to sea to ceremoniously scatter petals in the water.

“We have already given our son to the government. Now that he has fallen in this operation, we hope the government will return his remains to us after all the official ceremonies,” said Wayan Darmanta, the uncle of the submariner.

Family members of another lost crew member also gathered at the port town of Banyuwangi, which is home to the naval base on Java island where the Nanggala was stationed, to pay their respects.

President Joko Widodo offered his condolences to the relatives and pledged the state would fund the education of the dead sailors’ children.

An international search and rescue effort involving aircraft and specialised naval vessels, including from Singapore, Australia and the US, had raced against the clock to find the submarine in case it was still intact and before oxygen ran out.

But on Sunday Indonesia military chief Marshal Hadi Tjahjanto confirmed the Nanggala had sunk and all of its crew had died.

A slick of oil was seen at the vessel’s dive site, but no signals have been detected
World
2 weeks ago

Indonesia launches search for missing submarine with 53 on board