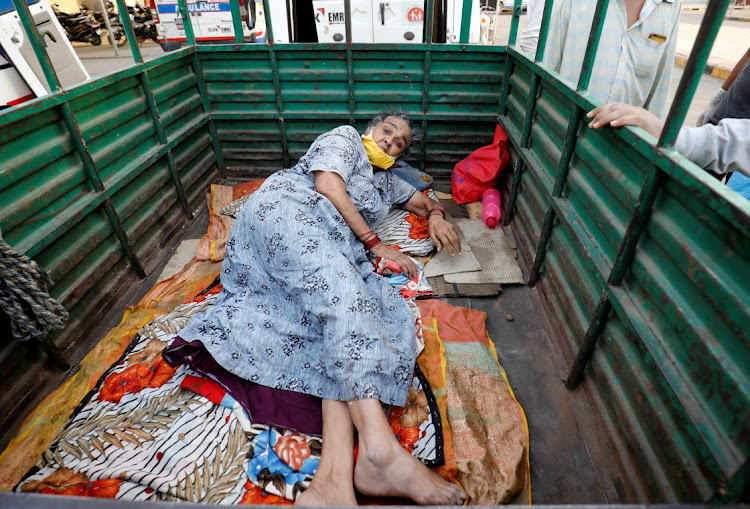 A woman lies in the back of a load carrier waiting to enter a Covid-19 hospital for treatment, amidst the spread of the coronavirus disease in Ahmedabad, India. Picture: REUTERS/AMIT DAVE

India’s mounting crisis surrounding a surge in coronavirus infections is prompting wealthy families to flee the country by private jet.

With reports of hospital bed and drug shortages sweeping social media, Indian tycoons and others who are not so well off but fearful for their health are booking flights to bolt holes in Europe, the Middle East and Indian Ocean islands.

“It’s not only the ultra rich,” said Rajan Mehra, CEO at New Delhi-based private jet firm Club One Air. “Whoever can afford to take a private jet are taking private jets.”

India reported 352,991 new infections on Monday, the highest daily tally worldwide since the pandemic began. With the country’s health infrastructure creaking under the strain, Bollywood movie superstars were spotted escaping to destinations including the Maldives, while at least three Australian cricketers have quit the Indian Premier League, the sport’s leading club tournament.

Some of the impetus for the wealthy to fly out of India has come from overseas nations taking measures to restrict travel from India as the new wave of Covid-19 cases has taken hold.

Canada, Hong Kong, the United Arab Emirates and the UK are among more than a dozen states that have imposed curbs, with others poised to announce measures. The Maldives will restrict Indians from visiting all but a handful of resort-only islands from Tuesday, leading to a last-minute rush in departures.

“There was a huge surge to London and Dubai just before the restrictions took place, and the Maldives too before they announced the ban,” said Mehra, who was previously the head of Indian operations at Qatar Airways.

A one-way flight from New Delhi to Dubai costs as much as 1.5- million rupees ($20,000), including ground handling and other fees, though private jet operators also charge for the return leg if the plane is empty, Mehra said.

While private fares were already high and have not been bumped up, the cost of airline tickets has climbed, the CEO said, with one-way economy-class trips to Dubai going for the equivalent of $1,300, more than 10 times the regular price.

“That shows how desperately people are trying to get away,” he said.

Bloomberg News. For more articles like this please visit  bloomberg.com

Hospitals overwhelmed as number of cases rises by 349,691 on Sunday
World
8 months ago

Infections rise to 352,991 in 24 hours, with overcrowded hospitals in Delhi and elsewhere turning away patients
World
8 months ago

From rerouting industrial oxygen to running a special train for transporting it across India, everything being done now should have been planned ...
World
9 months ago
Next Article