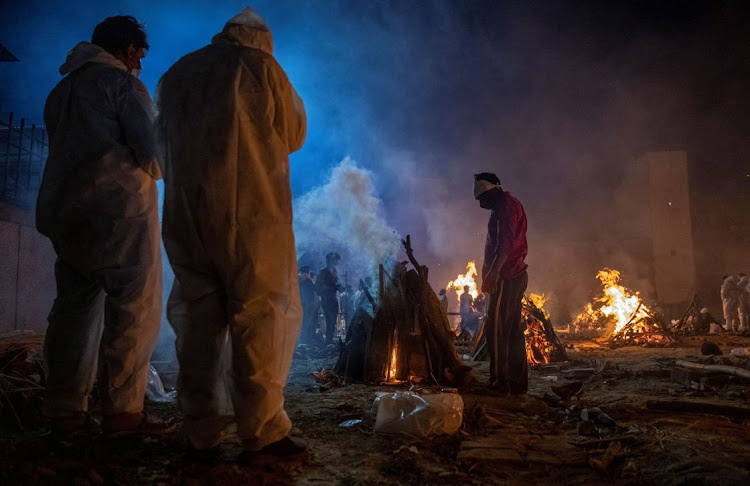 People cremate the bodies of victims of Covid-19 at a crematorium ground in New Delhi, India, April 24 2021. Picture: DANISH SIDDIQUI/REUTERS

New Delhi — The US, UK and Germany will be airlifting emergency aid after India set a new global record for the most Covid-19 infections in a day at almost 350,000.

Hospitals in the capital, New Delhi, and countrywide are turning away patients after running out of oxygen and beds. The number of cases rose by 349,691 on Sunday, the fourth consecutive day of record peaks.

The US said it was deeply concerned and would rapidly send aid. US secretary of state Antony Blinken said on Twitter: “We are working closely with our partners in the Indian government and we will rapidly deploy additional support to the people of India.”

German Chancellor Angela Merkel expressed her “sympathy on the terrible suffering” that the pandemic has brought, said her spokesperson, Steffen Seibert. “Germany stands in solidarity with India and is urgently preparing a mission of support.”

Britain said on Sunday it was sending more than 600 medical devices, including oxygen concentrators and ventilators.

Prime Minister Narendra Modi has urged all citizens to be vaccinated and to exercise caution, saying the “storm” of infections had shaken India.

His government has faced criticism that it let its guard down earlier this year, allowed big religious and political gatherings to take place when India’s cases fell to below 10,000 a day and did not plan for boosted health-care systems.

Now hospitals and doctors have put out urgent notices, saying they are unable to cope with the rush of patients.

Outside a Sikh temple in Ghaziabad, a city on the outskirts of Delhi, the street resembled the emergency ward of a hospital but crammed with cars carrying patients gasping for breath as they were hooked up to hand-held oxygen tanks.

Elsewhere, people were arranging stretchers and oxygen cylinders outside hospitals as they desperately pleaded for authorities to take patients in, Reuters photographers said.

“Every day, it is the same situation — we are left with two hours of oxygen. We only get assurances from the authorities,”
one doctor said on television.

Delhi’s chief minister, Arvind Kejriwal, extended by a week a lockdown in the capital that had been due to end on Monday. Covid-19 is killing one person every four minutes in the city.

Yet for now, Modi is shunning a nationwide lockdown and is encouraging states to keep their economies open.

With the streets of Delhi mostly empty and the markets nearly deserted, economists are signalling risks to their forecasts but not tearing them up just yet.

Epidemiologists and virologists say more infectious variants of the virus, including an Indian one known as B.1.6.1.7, have fuelled the ferocious surge.

Doctors at New Delhi’s All India Institute of Medical Sciences have found that one patient is now infecting up to nine in 10 contacts, compared with up to four last year.

India has recorded 16.96-million infections and 192,311 coronavirus deaths, health ministry data shows. But experts say the death count is probably far higher. The surge is expected to peak in mid-May with the daily count of infections reaching half a million, the Indian Express said, citing an internal government assessment.

The number of cases surges by almost 350,000 in 24 hours, setting a record for the fourth consecutive day
World
9 months ago

IMFs upgrade to 12.5%, the quickest rate among major economies, is in doubt as cases surge
World
9 months ago

New Delhi’s largest hospital operator rushed to court on Wednesday night to seek critical oxygen supply, causing the judge to lash out at the Modi’s ...
World
9 months ago

From rerouting industrial oxygen to running a special train for transporting it across India, everything being done now should have been planned ...
World
9 months ago