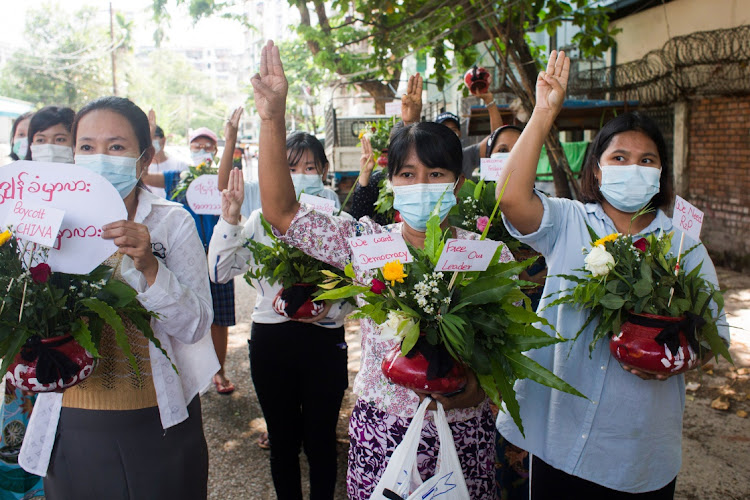 Women carry pots with flowers as they take part in a protest against the military coup in Yangon, Myanmar April 13 2021. Picture: REUTERS/STRINGER

Opponents of military rule in Myanmar called for a “silent strike” on Friday, urging people to say at home to mourn the more than 700 people killed in protests against a February 1 coup and to wear black if they have to go out.

Many ordinary people, infuriated by the return of military rule after five years of civilian government led by democracy champion Aung San Suu Kyi, have been taking to the streets day after day with activists thinking up new ways to show opposition as the security forces step up their suppression.

“We have to stage a Silent Strike to show our sorrow for the martyrs who have sacrificed their lives. The most silent voice is the loudest.”

Friday is the third day of the five-day traditional Buddhist New Year holiday, known as Thingyan. Most people this year are shunning the usual festivities to focus on their campaign against the generals who overthrew Suu Kyi's government and locked up her and many others.

In overnight violence, two people were shot and killed in the central town of Myingyan, Radio Free Asia reported.

A spokesperson for the junta could not be reached for comment.

The military has also been rounding up its critics and has published the names of more than 200 people wanted under a law that makes it illegal to encourage mutiny or dereliction of duty in the armed forces.

Two prominent protest organisers were arrested on Thursday along with an actor and singer, both known for speaking out against the coup.

International pressure has been slowly building on the military, particularly from Western governments, though the military has a long record of brushing off outside pressure.

The EU has agreed to impose sanctions on another 10 individuals linked to the coup and to target two businesses run by the armed forces for the first time in protest at the military takeover, two diplomats said.

While the EU has an arms embargo on Myanmar and targeted 11 senior military officials last month, the decision to target the two companies is the most significant response for the bloc since the coup.

EU diplomats told Reuters in March that parts of the military's conglomerates, Myanma Economic Holdings Limited (MEHL) and Myanmar Economic Corporation (MEC), would be targeted, barring EU investors and banks from doing business with them.

Human rights groups have also called for them to be sanctioned.

The EU declined to comment and no-one at Myanmar's mission to the EU in Brussels could be reached for reaction.

In rare action by an Asian company, South Korea's Posco Coated & Color Steel said on Friday it would end its joint venture with MEHL.

The firm did not give details of how it would end the venture but a spokesperson told Reuters while it was ending the venture relationship, it was not pulling out of Myanmar.

‘We can’t rely on China, Thailand and other neighbouring countries. The only country where refugees are being welcomed is India’
World
2 weeks ago