Lai is the founder of the pro-democracy Apple Daily newspaper, who was obliged to face the court four times in one day 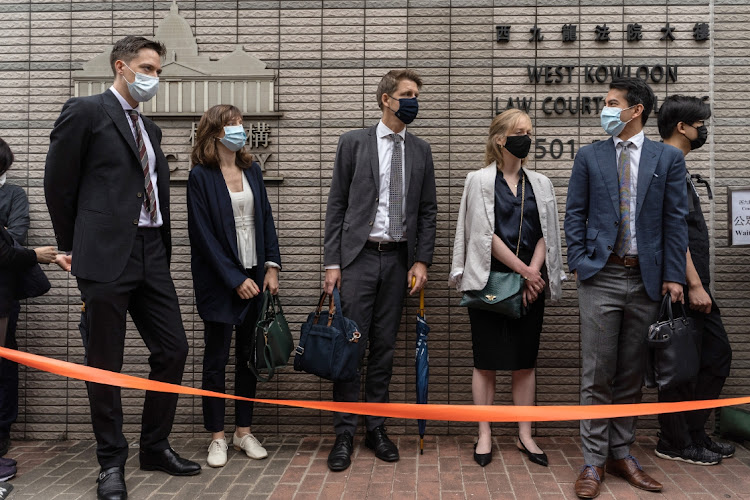 Consular representatives from Australia, Canada, Sweden, France and the Netherlands outside the West Kowloon Magistrates Courts ahead of a mitigation and sentencing hearing for Jimmy Lai and other 'elders' in the pro-Democracy movement in Hong Kong, China, on Friday, April 16 2021. Picture: BLOOMBERG/CHAN LONG HEI

Hong Kong — Hong Kong media tycoon and pro-democracy activist Jimmy Lai was sentenced Friday to a total of 14 months in prison for attending two unauthorised protests and charged with more national security offences as authorities pursue a deluge of cases against the city’s most high-profile dissidents.

Lai (73) and the founder of the pro-democracy Apple Daily newspaper, was sentenced alongside other prominent activists for organising and attending a rally that was not approved by police during the city’s unrest in 2019.

Hong Kong’s “father of democracy” Martin Lee (82) was handed a suspended sentence in the same case, as were senior lawyers and former lawmakers Margaret Ng (73) and Albert Ho (69), in recognition of their advanced ages and contributions to society, district court judge Amanda Woodcock said.

Earlier in the day, Lai was charged with two additional crimes under the city’s sweeping national security law — another count of foreign collusion, and for trying to help local activists flee to Taiwan.

The developments come on a day when Lai, a well-known critic of Beijing, faced four separate court appearances. He had two sentencings, a brief hearing on his national security law offences and also attended a separate hearing for a fraud case related to his company’s office space.

“Four cases in one day? Come on, that’s ridiculous,” said Mark Simon, Lai’s long-time deputy. “This is about showing their ability to crush the guy they think is the most powerful man in the movement. They’re sending a message to everyone.”

And yet Lai is only the most prominent among many Hong Kong democracy campaigners facing multiple charges for challenging Beijing’s tightening grip over the financial hub following sometimes-violent protests in 2019. While Hong Kong’s government maintains it is pursuing cases with no political motivations, lawyers and activists say the deluge of legal proceedings is designed to deter others from organising demonstrations and criticising Beijing.

“The wrongful prosecution, conviction and sentencing of these activists underlines the Hong Kong government’s intention to eliminate all political opposition in the city,” Amnesty International’s Asia-Pacific regional director Yamini Mishra said in a statement on Friday.

Hong Kong’s department of justice did not respond to a request for comment.