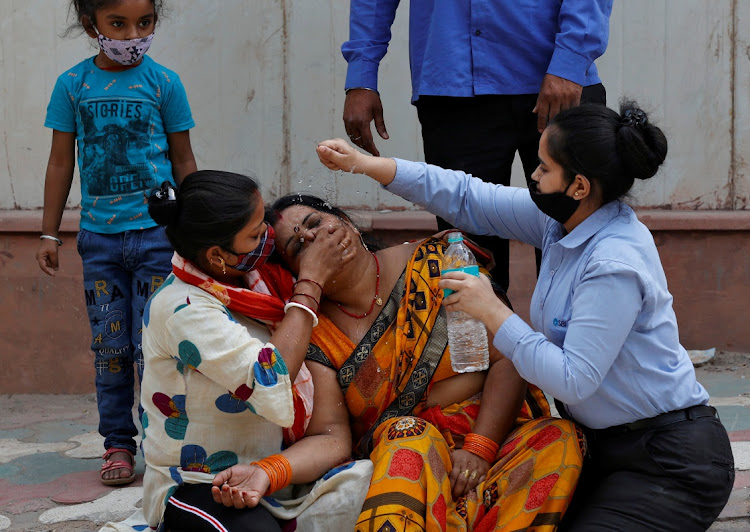 A woman is consoled after her husband died due after contracting Covid-19, in New Delhi, India, April 15 2021. Picture: REUTERS/DANISH SIDDIQUI

New Delhi — Many Indian hospitals were struggling to find more beds and oxygen as Covid-19 infections surged to a new daily record on Thursday, with a second wave of infections centred on the wealthy western state of Maharashtra forcing new restrictions.

Experts blamed everything from official complacency to aggressive variants. The government blamed a widespread failure to practise physical distancing and wear face masks.

“The situation is horrible,” said Avinash Gawande, an official at a government hospital in the industrial city of Nagpur that was battling a flood of patients, as were hospitals in neighbouring Gujarat state and New Delhi in the north.

“We are a 900-bed hospital, but there are about 60 patients waiting and we don't have space for them.”

Maharashtra, home to the financial capital of Mumbai, began a lockdown at midnight, a move that spurred a rush to stockpile essential items in advance.

Covid-19 patients and their relatives kept streaming in to the emergency ward at the hospital, arriving by ambulance, cars or rickshaws through the day.

"Last year also we have not seen such a bad situation. This time the number is very high and increasing very rapidly, going (at a) very fast speed, so the situation is really alarming,” said medical director Suresh Kumar.

“We are definitely overburdened… Today we have 158 admissions in Lok Nayak alone. All sick patients, all severe patients,” Kumar added.

Its tally of 14.1-million infections is second only to the US, with 31.4-million.

Despite injecting about 114-million vaccine doses, the highest figure worldwide after the US and China, India has covered only a small part of its 1.4-billion people.

India said on Thursday regulators would decide on emergency-use applications for foreign Covid-19 vaccines within three working days, as it tries to attract Pfizer, Johnson & Johnson and Moderna to sell their shots.

Outside a major city mortuary, weeping relatives gathered in the hot sun, waiting for the bodies of loved ones to be released.

Prashant Mehra, 44, said he had to pay a broker for preferential treatment before he could get his 90-year-old grandfather admitted to an overstretched government hospital.

“He died after six or seven hours,” he said. “We've already asked for our money back.”

Supplies of oxygen ran short in places such as Gujarat, the home state of Prime Minister Narendra Modi.

“If such conditions persist, the death toll will rise,” the head of a medical body in the state's industrial city of Ahmedabad told its chief minister in a letter.

Television broadcast images of a long queue of ambulances carrying virus sufferers waiting to be admitted to a city hospital that can accommodate more than 1,000 patients.

India was producing oxygen at full capacity for each of the last two days, the government said, and it had boosted output.

“Along with the ramped up production ... and the surplus stocks available, the present availability is sufficient,” the health ministry said in a statement.

Billionaire Mukesh Ambani's Reliance Industries will supply 100-metric tonnes of additional oxygen to Maharashtra through its refinery in Jamnagar in western India, a state minister said. Reports said it would be at no cost.

In the northern city of Haridwar, hundreds of thousands of pilgrims had thronged to a Hindu religious festival on the banks of the river Ganges on Wednesday, stoking fears of a new surge.

Modi's government has refused to call off ‘super-spreader’  festival, possibly fearing a backlash from religious leaders
World
1 month ago

‘We can’t rely on China, Thailand and other neighbouring countries. The only country where refugees are being welcomed is India’
World
1 month ago

Deal will result in one of the biggest retail warehouses in India, the size of 11 football fields
Companies
1 month ago
Next Article