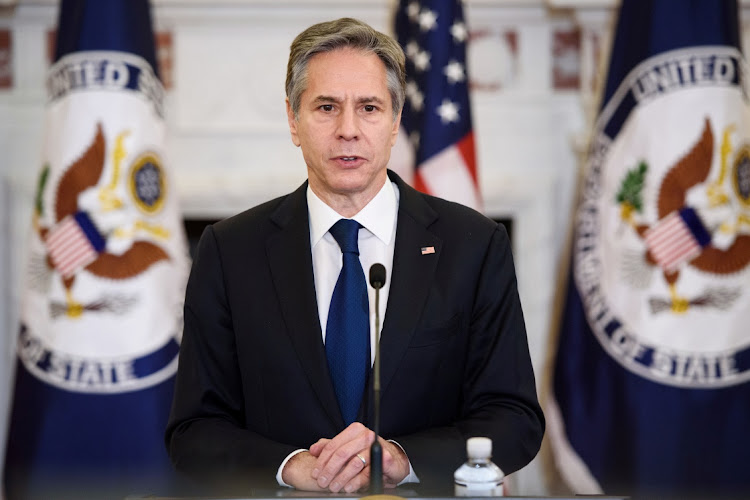 US secretary of state Antony Blinken at the state department in Washington, DC, the US, April 12 2021. Picture: MANDEL NGAN/REUTERS

While there was no immediate comment from Beijing, the news comes after the US state department on Friday issued new guidelines that will enable US officials to meet more freely with Taiwanese officials, further deepening ties with Taipei.

Chinese-claimed Taiwan has complained over the last few months of repeated missions by China's air force near the self-ruled island, concentrated in the southwestern part of its air defence zone near the Taiwan-controlled Pratas Islands.

It was the largest daily incursion since the ministry began regularly reporting Chinese military activities in Taiwan's air defence  zone in 2020.

The ministry added that combat aircraft were dispatched to intercept and warn away the Chinese aircraft, while missile systems were also deployed to monitor them.

The Chinese aircraft all flew in an area close to the Pratas Islands, according to a map the ministry provided.

China has in the past described such missions as being to protect the country's sovereignty and deal with "collusion" between Taipei and Washington.

The US, which like most countries has no formal diplomatic ties with Taiwan, has watched with alarm the stepped up tensions with Beijing.

US secretary of state Antony Blinken said on Sunday the US is concerned about China's aggressive actions against Taiwan and warned it would be a "serious mistake" for anyone to try to change the status quo in the Western Pacific by force.

China describes Taiwan as its most sensitive territorial issue and a red line the US should not cross. It has never renounced the possible use of force to ensure eventual unification.

As Biden teams up with Western powers, relations haven't been this bad since before Nixon initiated detente
Opinion
1 month ago
Next Article