From young newlyweds to an increasing number of women, IS-driven bombings in Indonesia and neighbouring countries are still frequent 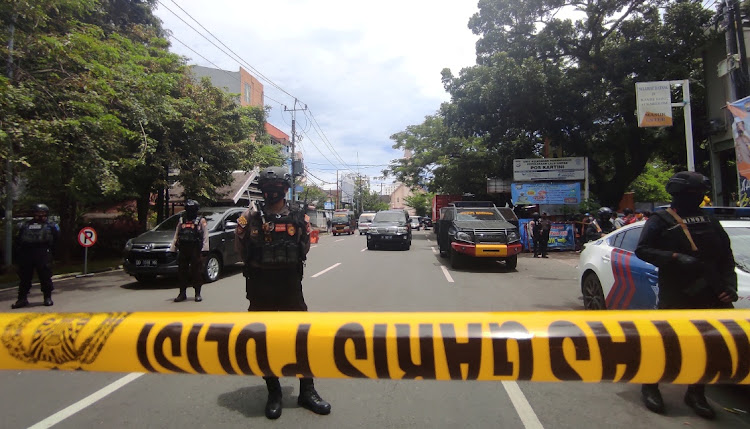 Armed police officers stand guard along a closed road following an explosion outside a Catholic church in Makassar, Indonesia, on March 28 2021. Picture: REUTERS

Jakarta — As the rain teemed down and guests feasted on chicken curry, Muhammad Lukman married his burka-clad bride in a late-night ceremony at the home of Rizaldi, the head of their Islamic prayer group, on the Indonesian island of Sulawesi.

Guests who attended the August wedding said the ceremony was held at 10pm, deemed auspicious.

This week, on Palm Sunday morning, the newlyweds strapped pressure cooker nail bombs to their chests and detonated them as they drove into the Sacred Heart of Jesus Cathedral in the provincial capital of Makassar.

Their deaths followed the killing of their wedding host in January, shot by counter-terrorism forces.

The millennial, newlywed bombers were the only fatalities in the cathedral attack, but the incident offers a view into the Islamic State’s (IS) dangerous legacy in Southeast Asia, and the personal and family ties that bind religious extremists across the region.

In Indonesia, the world’s most populous Muslim-majority nation, pro-IS groups remain a threat two years after the ultra-radicals were defeated in Syria and Iraq, analysts say.

The Makassar church bombing was the third such attack perpetrated by husband and wife suicide bombers from Indonesia in recent years. In May 2018, an Indonesian family of six, a husband and wife and their four children, detonated explosives at several churches in the Javanese city of Surabaya, part of a series of attacks that killed 28 people.

Less than a year later, Ulfa Handayani Saleh and her husband Rullie Rian Zeke, both Indonesians, bombed a cathedral in Jolo, in the southern Philippines, killing 23 and injuring more than 100. Ulfa was the sister of Rizaldi, whose home was where the Makassar bombers were married.

“This is the unique legacy of IS promoting the rise of familial terrorism,” said Noor Huda Ismail, a visiting fellow at the S Rajaratnam School of International Studies, “A number of Indonesians joined IS as family members.”

More than 1,100 Indonesians left the country to join IS, sometimes as whole families, including toddlers and infants, said Sidney Jones, director of the Jakarta-based Institute for Policy Analysis of Conflict. In part, they were influenced by effective IS propaganda that idealised the concept of rearing children in a pure Islamic state, she said. Hundreds were deported or returned after IS was defeated in 2019.

‘Do what you can’

Police said the Makassar bombers were a couple who belonged to Jamaah Ansharut Daulah (JAD), an IS-inspired group suspected of suicide attacks in Surabaya and elsewhere.

Given the fragmented nature of JAD, Jones said it was instructive to examine the personal ties that reveal how extremists connect up across the region. The Makassar attack, said Jones, was likely part IS ideology fused with revenge for Rizaldi’s death.

“What we are seeing is not only supporters of IS acting on their own in accordance with instructions earlier to do what you can wherever you can,” she said, “But also doing it because of local drivers.”

Opening a kebab shop next to his house after he wed, neighbours say Lukman was quiet and religious, that his wife sold skin-whitening products online, and everyone was surprised to learn they harboured violent intentions.

“I was selling food at the market when someone said someone had blown themselves up. I said, ‘So dumb. Why would anyone kill themselves? What for?’ But I didn’t realise it was my nephew,” Lukman’s aunt, Sitti Rahma said through tears.

Police said the bomber left a farewell letter to his mother, in which he expressed his desire to die for his religious beliefs.

On Wednesday, police shot dead a gun-wielding woman who had attempted to attack the national police headquarters in Jakarta. Hours earlier she had posted a picture of the IS flag on her Instagram account, police said.

Seen as revenge for a string of arrests of suspected militants across the archipelago in recent days, the incident is another example of a global trend of women taking on more active militant roles.

Since the Palm Sunday attack, Indonesian police have arrested at least 32 suspected extremists in Jakarta, Sulawesi, Java, and West Nusa Tenggara, raids that also uncovered more than 5kg of explosives, including “Mother of Satan”, or triacetone triperoxide (TATP), a powerful but unstable mixture often used by Islamist militant groups.

“Despite being pushed back in the Middle East, IS networks in various countries are still active, including in Indonesia,” said terrorism analyst Stanislaus Riyanta. “Their strength is diminished, but they have not died yet.”

Ismail, the analyst at the School of International Studies said: “You cannot deny the fact that there is still a virtual caliphate, which is now extremely hard to counter.”

Seham Hamu helps raise grandchildren and other relatives after the death of her husband, son and a granddaughter, which she says was ‘God’s will’
World
1 month ago