Communist Party is betting that inflicting financial costs on firms will be popular at home, analysts say 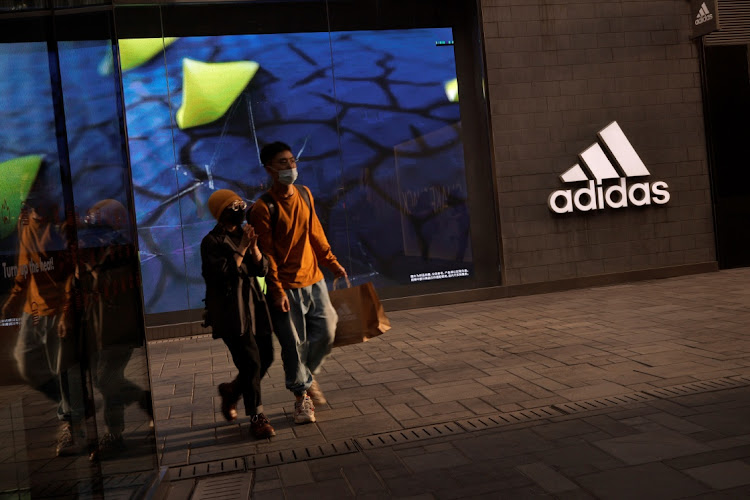 People walk past an store in a shopping area in Beijing, China, March 28 2021. Picture: REUTERS/THOMAS PETER

Singapore — For years China has sought to draw moral equivalence with the West over human rights, insisting that other countries have no standing to criticise its policies. Now Beijing is making companies pay if they disagree.

China this week has pushed a campaign to boycott Western retailers after the US, UK, Canada and the EU imposed sanctions over human-rights abuses against ethnic minority Uyghurs in Xinjiang. The furore started when the Communist Youth League amplified a months-old statement from Sweden’s Hennes & Mauritz (H&M) expressing concern about reports of forced labour in the far west region, and quickly spread to other companies.

While Western and Asian companies have frequently been targets of Chinese nationalism over the years, the latest flurry signals a shift in strategy by President Xi Jinping’s government as it confronts a more unified approach from the US and its allies. Analysts say the Communist Party is betting that a response that inflicts financial costs on companies will be popular at home, show China stands on equal footing with the US and help thwart President Joe Biden’s efforts to heap more pressure on Beijing over human rights.

Though Xinjiang is in the spotlight now, Chinese diplomats made clear during tense talks with US counterparts in Alaska last week that Xi’s administration is drawing a firm line against what it calls “interference” in “internal affairs” including Hong Kong, Tibet and Taiwan.

That raises the prospect that foreign companies operating in China across a range of industries could find themselves in the geopolitical firing line, facing pressure from Beijing to keep quiet on human rights just as global investors put more weight on environmental, social and governance issues.

Under Xi, China appears to have adopted the mantra that it is better to be feared than liked. China is committed to sending a message that it will not take a punch without throwing a counterpunch

China’s earlier approach of simply denying allegations has been seen as a “weak defence”, according to Wang Huiyao, an adviser to China’s cabinet and founder of the Centre for China and Globalisation. China’s containment of Covid-19, push to eradicate absolute poverty and economic progress are all boosting morale in Beijing, he said.

“Rather than hiding and saying no, how about saying what we did well,” Wang said. “[It’s a] little more confident approach.”

In addition to hitting the EU and UK with retaliatory sanctions over Xinjiang, a move that threatens to scuttle an investment deal between China and the 27-member bloc, Chinese officials hammered the West this week for a laundry list of failings from Nazism and colonialism in Europe to Japan’s invasions and the US war in Iraq. China also published its 22nd annual report critical of how the US handles human rights, prominently featuring George Floyd’s dying plea “I can’t breathe”.

“Under Xi, China appears to have adopted the mantra that it is better to be feared than liked,” said Ryan Hass, senior fellow at the Brookings Institution.

“China is committed to sending a message that it will not take a punch without throwing a counterpunch,” said Hass.

The more aggressive rhetoric, he added, is part of a strategy to “build acceptance for the view that democracy is not a universal ideology and does not hold answers for challenges of the 21st century”.

In Alaska, Politburo member Yang Jiechi told his American counterparts most countries would not recognise “the universal values advocated by the US” while saying their political systems were essentially the same: “The US has its style — US-style democracy — and China has the Chinese-style democracy.”

A senior Western diplomat in Beijing said the Alaska meeting showed China’s relationship with US allies will only get worse. China’s power mostly comes from its ability to leverage its huge market while dealing with countries individually, the diplomat said, and a more unified approach among Beijing’s critics represents a threat to that approach.

Multinationals operating in China have frequently found themselves apologising. Daimler in 2018 expressed remorse for an Instagram post quoting the Dalai Lama that “hurt the feelings of Chinese people”, while Gap issued an apology for a T-shirt with a map of China that didn’t include Taiwan, Tibet or disputed islands in the South China Sea.

At a H&M store in Shanghai on Friday, a security guard noticed a drop in foot traffic over the past few days while expressing worries of possible “irrational behaviour” by some customers. While H&M has not commented over the uproar, on Friday a statement on forced labour in Xinjiang was no longer accessible on its website. Similarly, a statement by Zara parent Industria de Diseno Textil saying it had “zero tolerance” regarding forced labour in Xinjiang also appeared to be taken down.

Chinese brands have put more pressure on global rivals in recent years, a trend that has accelerated during the pandemic. Beijing-based China Feihe has outperformed brands such as Danone and Nestle by claiming its products are “more suitable for Chinese babies”. Anta Sports in 2018 passed Nike to become China’s second-largest sports apparel brand behind Adidas, while local names accounted for seven of the top 10 cosmetics brands last year, up from just three in 2017, according to market researcher Daxue Consulting.

Chinese celebrities are also feeling the heat to get in line. The agency of Huang Zitao, a 27-year-old singer and actor, said on Thursday he had terminated co-operation with France’s Lacoste even though the clothing manufacturer never issued a statement on Xinjiang cotton. The announcement came after Lacoste did not respond to his requests to clarify its stance on “all global social-media platforms”, said the agency. The company did not immediately respond to a request for comment.

While China realises it is unlikely to silence criticisms from the West by fighting back, its more aggressive stance is mainly to show a domestic audience that the Communist Party is “the best and most determined defender of China’s interests”, said Shi Yinhong, director of Renmin University’s Centre on American Studies in Beijing.

“So the recrimination is set to continue,” he said. “And this could push China and the US — and even China and the West — further away.”

The US added Ofilm to its entity list in July 2020, saying it was among 11 Chinese firms ‘implicated in human rights violations and abuses’ in ...
Companies
10 months ago