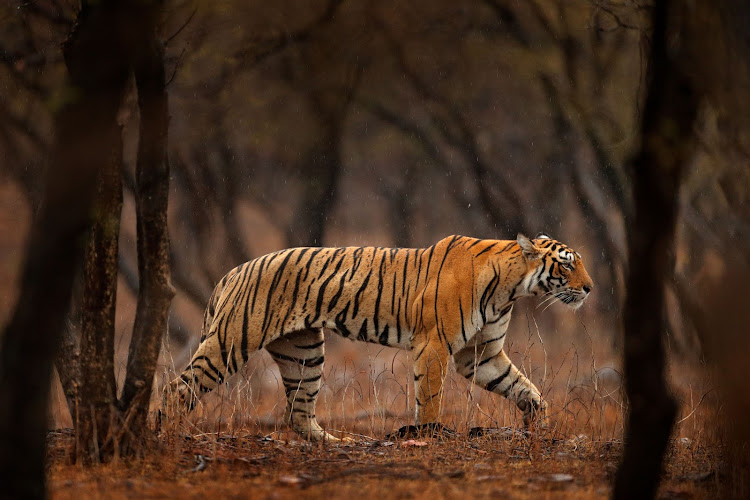 A female tiger in one of India's national Pars. Picture: 123RF/ONDREJ PROSICKY

A group of indigenous people — known for gathering honey — are protesting against their eviction from an Indian tiger reserve, a flashpoint in an ongoing legal battle that has pitted wildlife conservationists against land rights groups across the country.

The Jenu Kuruba tribe, which traditionally gathers honey and other forest produce, has lived within the Nagarhole National Park and Tiger Reserve in the southern state of Karnataka for generations. But hundreds of people from the community were evicted after authorities designated the park a tiger reserve in 1999 and dismissed their claims for land rights under a 2006 federal law designed to protect them.

“This is the land of our ancestors. We lived here long before this forest became a national park and a tiger reserve — yet we are being evicted,” Shivu Appu, a Jenu Kuruba leader in Nagarhole, said on Thursday.

“We have traditional knowledge to take care of the forest and animals. We worship the animals and the trees, and would never destroy what is sacred to us,” he told the Thomson Reuters Foundation.

India’s 104-million indigenous people — also known as Adivasis, or “original inhabitants” — make up less than 10% of the country’s population, and are among its most impoverished.

The Forest Rights Act (FRA) of 2006 aimed to improve their lives by recognising the right of at least 150-million people to inhabit and live off about 40-million hectares of forest land. But states have been slow to implement the law, and more than half of all claims have been rejected, according to land rights groups and official data.

“We are adhering to the procedure and all valid claims have been settled,” said Sanjay Mohan, chief of the Karnataka forest department. “Those whose claims were rejected, it is because they did not meet the criteria under the law.”

The Jenu Kuruba applied for their rights in 2009, but only a few hundred claims have been settled, with thousands more rejected, said Appu, who has camped outside the forest ranger’s office for a week with hundreds of others.

“For the Jenu Kuruba, community rights are key, yet these have not been recognised,” said Roy David, chair of the Coorg Organisation for Rural Development, that works with indigenous people in Karnataka. “They have nowhere else to go, and cannot make a livelihood if they are forced to leave the forest.”

In 2017, India’s government-run tiger conservation agency directed states not to grant land rights to indigenous people and forest dwellers living in tiger reserves, saying they posed a threat to the wildlife.

A group of conservationists and wildlife organisations then filed a lawsuit against the FRA, saying it had caused deforestation and destroyed wildlife.

In 2019, the supreme court ordered authorities to remove forest-dwellers in states where nearly 2-million claims, each potentially representing a household, had been rejected under the act. The top court later stayed its order to allow states to further examine the rejected claims.

“We hope that our rights are recognised,” said Appu. “If we have to leave the forest, that will be the end of our tradition, our culture and way of life.”

As soon as they are inoculated, many Americans want to up and go, spending much less time than usual on planning their getaways
Life
1 year ago
Next Article