More than 6,000 brought to safety as dams continue to overflow and rivers bulge 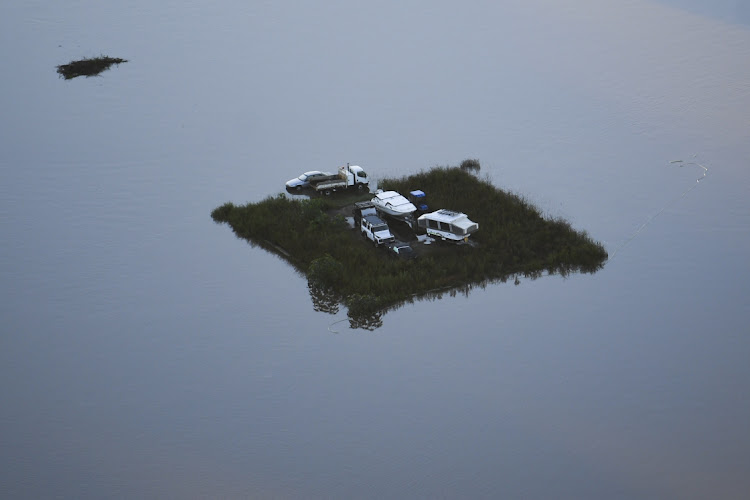 Flood affected areas in the Windsor area as seen from a helicopter on March 24 2021 in Sydney, Australia. Picture: GETTY IMAGES/LUKAS COCH

Sydney — Australian authorities issued fresh flood evacuation orders for parts of the east coast on Wednesday, and warned that water levels would keep rising in some areas, even as Sydney woke up to clear skies for the first time in several days.

Wild weather systems have drenched the country’s east, prompting tens of thousands of evacuations, especially in the hardest-hit state of New South Wales (NSW) where dams continue to overflow and rivers bulge.

NSW premier Gladys Berejiklian said 6,000 more people were evacuated in the last 24 hours and that new evacuation orders had been issued for residents in Sydney’s western regions to move to safe zones.

“What we still have to be aware of is that thousands and thousands of people are still on evacuation warnings, that the rivers will continue to swell, that catchments will continue to experience flows of water not seen in 50 years and in some places 100 years,” Berejiklian told reporters in Sydney.

The Insurance Council of Australia, the peak industry body, said about 17,000 damages claims worth about A$254.2m had been lodged by Wednesday morning across NSW and Queensland.

No deaths linked to the floods have been reported but the destruction is far-reaching and more than 40,000 people in the state have been evacuated so far.

Homes have been submerged, livestock swept away and crops drowned on a large scale. There have also been many animal rescues, with watercraft used to move dogs, cattle, and even an emu, away from the flood waters.

Australian Prime Minister Scott Morrison said on Wednesday that heavy-load helicopters would be prepared to transport food to supermarkets where supplies are running short.

Officials said that the Warragamba Dam, the major water supply for Sydney, will continue to spill over the next several days, though at a slowing rate.

“We are seeing a reduction, and given that rains have passed and inflows declining we anticipate that spill should cease in the coming days,” Water NSW spokesperson Tony Webber said.

Forecasters said the weather system will shift to the island state of Tasmania on Wednesday, bringing heavy rains and localised flooding.

Though conditions have eased, the weather bureau said water levels in rivers will not recede for several days.

“We have had phenomenal amounts of rainfall right across the state over the last week and with that rain, it’s got to drain into the rivers,” bureau official Victoria Dodds said in a televised news briefing.

Several hundred Australian Defence Force personnel will be sent to flood-affected areas in the country’s east over the next few days to help in the recovery, Australia’s emergency management minister David Littleproud said on Wednesday.

“Their job will be out there cleaning up, making sure that we get rid of the debris, having boots on the ground,” Littleproud said.

When a wild bird loses its song, the silence is deafening