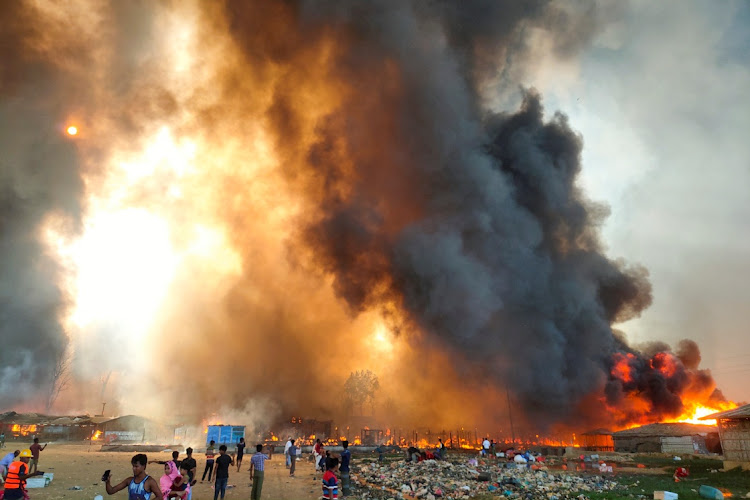 Smoke billows at the site of the Rohingya refugee camp where fire broke out in Cox's Bazar, Bangladesh, March 22 2021. Picture: REUTERS/STRINGER

Dhaka — Bangladeshi officials began investigating the cause of a fire that left several dead at a Rohingya refugee camp, as officials sifted through the debris looking for more victims on Tuesday.

The fire ripped through the Balukhali camp near the southeastern town of Cox’s Bazar late on Monday, burning through hundreds of homes as people raced to recover their meagre possessions.

Police have so far confirmed only two deaths after recovering the bodies. Rohingya witnesses, however, said several people had died in the blaze that has left tens of thousands with no shelter.

Some witnesses said barbed wire fencing around the camp trapped many people, causing some of the casualties and leading international humanitarian agencies to call for its removal.

Humanitarian organisation Refugees International estimated 50,000 people had been displaced — in already crowded camps that house more than one million Rohingya refugees — and the extent of the damage may not be known for some time.

“Many children are missing, and some were unable to flee because of barbed wire set up in the camps,” it said.

John Quinley, of Fortify Rights, a rights organisation working in the area, said he had heard similar reports, adding the fences had hampered the distribution of humanitarian aid and vital services at the camps in the past.

“The government must remove the fences and protect refugees,” Quinley said. “There have now been a number of large fires in the camps including a large fire in January this year. The authorities must do a proper investigation into the cause of the fires.”

The vast majority of the people in the camps fled Myanmar in 2017 amid a military-led crackdown on the Rohingya that UN investigators said was executed with “genocidal intent”, charges Myanmar denies.