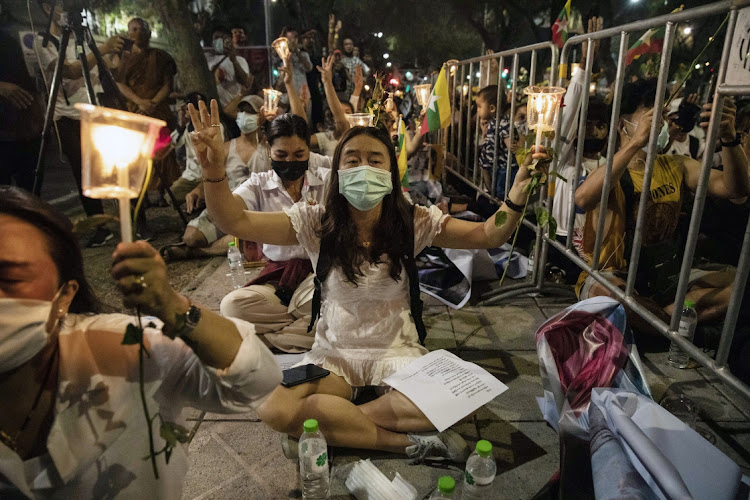 Demonstrators give the three-finger salute during a protest outside the United Nations Building in Bangkok, Thailand, on Thursday, March 4 2021. Picture: BLOOMBERG/ANDRE MALERBA

Demonstrators give the three-finger salute during a protest outside the United Nations Building in Bangkok, Thailand, on Thursday, March 4 2021. Picture: BLOOMBERG/ANDRE MALERBA

Singapore — Alphabet’s YouTube has removed five channels of Myanmar’s military-run television networks hosted on its platform in the wake of the coup in the Southeast Asian country.

“We have terminated a number of channels and removed several videos from YouTube in accordance with our community guidelines and applicable laws,” a YouTube spokesperson said in a statement in response to a Reuters question.

The channels taken down include the state network, MRTV, (Myanma Radio and Television) as well as the military-owned Myawaddy Media, MWD Variety and MWD Myanmar, YouTube said.

Their removal comes during the bloodiest week so far of anti-coup protests, with 38 people killed on Wednesday, according to the UN, as security forces tried to crush rallies and used live rounds in some areas.

The army seized power on February 1, alleging mass fraud in the November election won by Aung San Suu Kyi’s government. The election commission said the vote was fair, but the military has used media to make its case and justify the takeover.

MRTV pages were banned by Facebook in February, while it had previously barred Myawaddy in 2018 when it banned army chief Min Aung Hlaing — now the military ruler — and more than a dozen other senior officers and organisations on the platform.

Facebook has now banned all pages linked to Myanmar’s army — and was itself banned by the junta in February.

Other social media platforms are also grappling with how to moderate military content and a proliferation of hate speech and misinformation in Myanmar.

Reuters reported on Thursday that Myanmar soldiers and police were using TikTok to deliver death threats to protesters.

Researchers have said that after the Facebook ban the military was trying to build its presence on other platforms.

YouTube had faced criticism from researchers and civil society groups for a comparatively hands-off approach during Myanmar’s November 8 vote.

A Reuters review found dozens of channels hosted on YouTube that had promoted election misinformation while posing either as news outlets or political programmes.

Google said in December it had terminated 34 YouTube channels after investigation into co-ordinated influence operations linked to Myanmar.