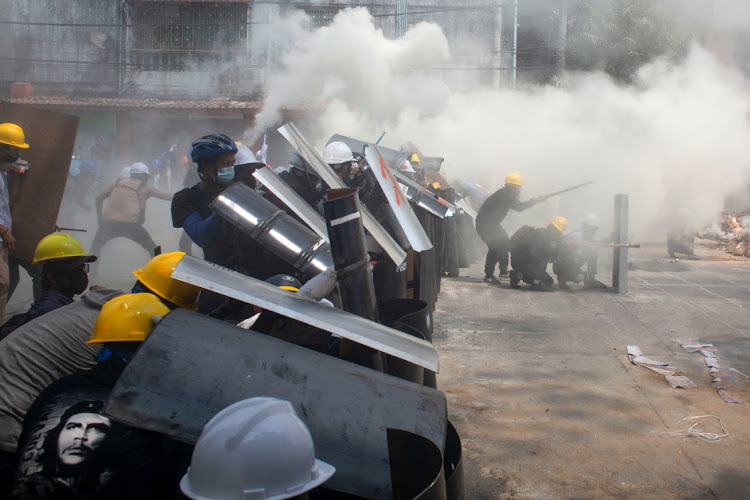 Protesters use makeshift shields during an anti-coup protest in Yangon, Myanmar, on March 3 2021. Picture: REUTERS

Kuala Lumpur/Bangkok — Since arriving in Thailand a few years ago, Myanmar migrant worker Own Mar Shwe had been sending money home every month for her family to buy food and medicine. That came to an abrupt halt last month.

Like millions of Myanmar migrants who work abroad and send their earnings back home to dependants, the February 1 coup has cut a lifeline for her family with bank and remittance services heavily disrupted.

“I’m concerned about how my family will get through each day,” Own Mar Shwe, 41, said by phone from Samut Sakhon, a Thai seafood hub south of the capital Bangkok.

She usually sends 6,000 baht ($200) a month from working at a shrimp market, paying a broker who uses Wave Money — a digital payment service — to transfer the money to convenience stores in Myanmar where her relatives pick up the payments.

She has not been able to do so since the military ousted the elected government of Nobel laureate Aung San Suu Kyi a month ago, imposing internet curbs and prompting mass street protests as well as workers’ strikes across Myanmar.

“I don’t know what to do,” said the mother-of-three, expressing worries for her 76-year-old mother who is sick and relies on her income to buy medicine.

More than 4-million Myanmar migrants from a population of about 54-million work overseas in industries ranging from manufacturing, agriculture to domestic work, UN data shows. Their top two destinations are Thailand and Malaysia.

Many of them are the breadwinners for their families, sending back remittances that amounted to $2.4bn in 2019, or more than 3% of the country’s GDP, World Bank figures show.

Hundreds of thousands of people have rallied across Myanmar since the coup, with at least 31 people killed.

Many businesses have been closing to show support for the anti-coup movement or allowing their employees to attend protests during work hours. Bank services are irregular, with some branches closed, others reducing operations and limiting withdrawals.

The disruptions have led to a number of banks and financial firms abroad temporarily suspending their money transfer services to Myanmar or advising clients to put the transfer plan on hold, citing potential delays.

A check with a branch of Thailand’s Kasikornbank in Bangkok — as well as the Western Union and International Money Transfer outlets in the Malaysian capital Kuala Lumpur — confirmed this. Another Thai bank, Siam Commercial Bank, said its transfer service is still up and running.

Western Union, the world’s largest money transfer firm, has said it “cannot provide a definitive time frame” on when its transfer service to Myanmar might resume, according to a post on its website on February 19.

“Remittances are hugely important to keep families going in countries of origin,” said Nicola Piper, a professor of international migration at the Queen Mary University of London, who studies Asia labour migration.

“The current situation, the combined Covid-19 and political crisis, would most likely have a huge impact on the livelihoods of families left behind.”

Even before the political turmoil, Covid-19 has had an “acute effect” on the livelihoods of Myanmar’s migrants and their families, with millions suffering job losses and reduced income, according to a 2020 UN report.

Benjamin Harkins, a UN official in Myanmar, said the popularity of using informal channels to send money among Myanmar migrants could provide some cushioning to the temporary closure of formal financial institutions.

Such channels are done through a trust-based money transfer network — known as hundi or hawala — run by unlicensed financial brokers, and could push Myanmar’s remittances closer to $10bn if these informal flows are included, he said.

Harkins said remittances would become even more important for livelihoods after the coup as the prospects of foreign firms reconsidering their investments in Myanmar is likely to have a “negative impact” on the local job market.

“Moreover, regular channels for labour migration to key destination countries such as Thailand and Malaysia remain closed due to Covid-19,” said Harkins, the senior programme manager at the UN’s Livelihoods and Food Security Fund in Yangon, Myanmar’s largest city.

“That could create a situation where the need for remittances are greater than migrant workers are able to fulfil, contributing to an increase in poverty for the affected households and intense pressure on migrants to provide for their families.”

For Ko Nai Ling, who arrived in Malaysia in 2013 from his village in Myanmar to find a better paying job to support his two families from separate marriages, all he hopes is that he can send money again soon.

He has barely been able to communicate with his family since the coup as access to Facebook — used by half of Myanmar’s population — remains restricted.

“If I can’t send money, I don’t know how they will survive.”