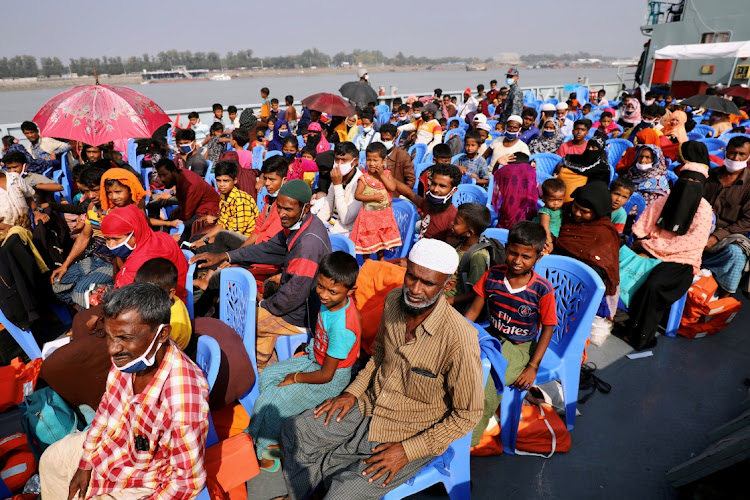 Rohingya refugees are seen aboard a ship as they are moved to Bhasan Char island in Chattogram, Bangladesh, Dec. 4, 2020. Picture: MOHAMMAD PONIR HOSSAIN

Kolkata — Human Rights Watch and Rohingya Muslim refugees in India urged the government on Monday to provide refuge to 81 Rohingya people whose boat has been drifting in the Andaman Sea for over two weeks.

Since February, India has been providing food, medical and technical aid to Rohingya crammed on a fishing boat that was found drifting in international waters after it left southern Bangladesh. The Rohingya had hoped to reach Malaysia but the boat’s engine developed technical snags.

Eight people on board the boat have died and many of the 81 survivors are sick and suffering from extreme dehydration, having run out of food and water four days into their journey.

India’s coast guard has repaired the vessel but was not permitting it to enter Indian waters, and instead wanted it to return to Bangladesh.

“We are begging Indian authorities to bring our people to land, how can all countries refuse to accept 81 lives stranded in international waters?” said Sabber Kyaw Min, director of Rohingya Human Rights Initiative (RHRI) in India.

“Eight are already dead, we have a right to receive their bodies,” Min said adding he and about 16,000 Rohingya refugees living in India were urging the government to accept the distressed refugees.

Meenakshi Ganguly, the South Asia director of Human Rights Watch, said India should uphold its obligations under international law and protect the refugees.

“The Rohingya have been so persecuted, and for so long, they are desperate to find a place where they can be safe and made to feel welcome. And yet, no country in the world, even those that sympathise with them, are willing,” Ganguly said.

India's foreign ministry did not respond to questions on whether the 81 Rohingya will be allowed to enter India, and neither did it provide an update on talks with Bangladesh on the issue.

New Delhi has not signed the 1951 Refugee Convention, which spells out refugee rights and state responsibilities to protect them and nor does it have a law protecting refugees.

But Bangladesh foreign minister AK Abdul Momen last week told Reuters that his government expects India, the closest country, or Myanmar, the Rohingyas’ country of origin, to accept the 81 survivors.

More than one-million Rohingya refugees from Buddhist-majority Myanmar are living in teeming camps in predominantly Muslim Bangladesh. Many of them fled their country after Myanmar's military conducted a deadly crackdown in 2017.

Myanmar does not recognise the Rohingya as an ethnic group and insists that they are Bangladeshi migrants living illegally in the country.

The country sees a seventh day of protests, with thousands of arrests, as other Western nations talk sanctions after the military coup
World
11 months ago

Malaysia is home to more than 154,000 asylum-seekers from Myanmar, according to the UN refugee agency
World
11 months ago

As US sanctions on military leaders set to kick in, protesters are not backing off and are getting increasing support from neighbouring countries
World
11 months ago