Military supporters clash with protesters over coup in Myanmar 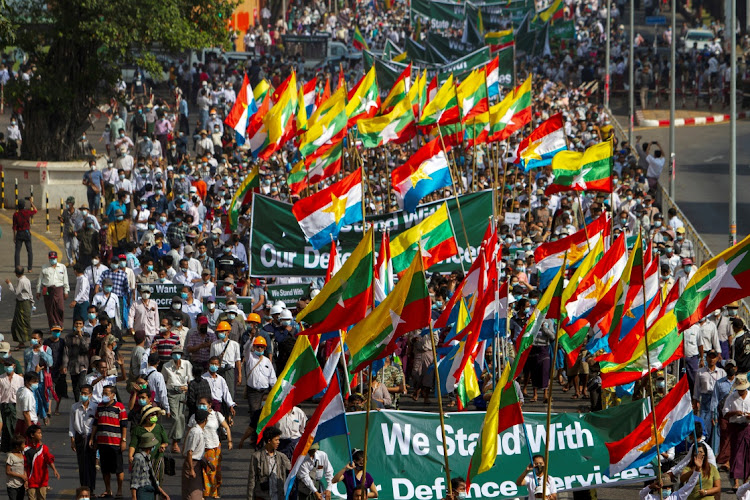 Supporters of Myanmar’s military carry banners and flags during a rally in Yangon, Myanmar on February 25 2021. Picture: REUTERS

Some armed with knives and clubs, others firing slingshots and throwing stones, supporters of Myanmar’s military attacked opponents of the coup in downtown Yangon on Thursday, while Southeast Asian governments scrambled for ways to end the crisis.

Myanmar has been in turmoil since the army seized power on February 1 and detained civilian government leader Aung San Suu Kyi and much of her party leadership after the military complained of fraud in a November election.

There have been about three weeks of daily protests and strikes and students planned to come out again in the commercial hub of Yangon on Thursday. But before many opponents of the coup gathered, about 1,000 supporters of the military turned up for a rally in central Yangon.

Video footage showed several apparent supporters of the military, one wielding a knife, attacking a man outside a city-centre hotel. Emergency workers helped the man as he lay on the pavement after his attackers moved off but his condition is not known.

The violence will compound worries about a country largely paralysed by protests and a civil disobedience campaign of strikes against the military. Earlier, police blocked the gates of Yangon’s main university campus, stopping hundreds of students inside from coming out to demonstrate.

Doctors were also due to hold a protest as part of a “white coat” revolution.

Meanwhile, Facebook said that due to the risks evident from the “deadly violence” seen since the coup, it had banned the Myanmar military from using its Facebook and Instagram platforms with immediate effect.

The spokesperson for the ruling military council did not respond to a call seeking comment.

The security forces have shown more restraint compared with earlier crackdowns against people who pushed for democracy during almost half a century of direct military rule. Military chief Gen Min Aung Hlaing says authorities are following a democratic path in dealing with the protests and police are using minimal force, such as rubber bullets, state media reported.

Nonetheless, three protesters and one policeman have been killed. A rights group said that as of Wednesday 728 people had been arrested, charged or sentenced in relation to the pro-democracy protests.

The army stepped in to oust the government saying military complaints of fraud in a November 8 election, swept by Suu Kyi’s party, as expected, had been ignored. The election commission said the vote was fair. The army said its action was within the constitution and promised to hold a new election after reviewing voter lists.

Suu Kyi has been detained incommunicado since the coup, at her home in the capital, Naypyitaw, but her party says its November victory must be respected.

The question of whether to hold a fresh election has emerged as the centre of the first diplomatic efforts to find a path out of the crisis, with Indonesia taking the lead within the Association of Southeast Asian Nations (Asean).

Its foreign minister Retno Marsudi said on Wednesday that she had held intensive talks with the Myanmar military and representatives of the ousted government. Retno met Myanmar’s military-appointed foreign minister Wunna Maung Lwin for talks in Bangkok earlier in the day.

But Indonesia’s intervention has raised suspicion among opponents of the coup in Myanmar who fear it will confer legitimacy on the junta and its bid to scrap the November election.

Retno told reporters the wellbeing of the people of Myanmar is the top priority. “We ask for everybody to use restraint and not resort to violence,” she said after talks with the Myanmar minister and her Thai counterpart, Don Pramudwinai.

A report this week cited sources as saying Indonesia is proposing that Asean members send monitors to ensure the generals stick to their promise of fair elections. The military has not given a timeframe for an election though it imposed a one-year state of emergency when it seized power.

Retno did not mention an election but emphasised “the importance of an inclusive democratic transition process”.

The crisis has restored Myanmar’s reputation as the problem member of the 10-country Asean and the diplomatic scramble by its neighbours comes as wider international concern is growing.

The US, Britain and others have imposed limited sanctions aimed at members of the junta and military businesses.

‘Shooting at a peaceful protester with real bullets is such an unforgivable thing in our society,’ said a doctor who treated her
World
1 month ago

Indonesia is fighting one of Asia's biggest coronavirus pandemics and aims to inoculate 181.5-million within 15 months
World
1 month ago

Tens of thousands gather across the country to protest the coup, vowing to never back down, as UN worries about violence grow
World
1 month ago
Next Article