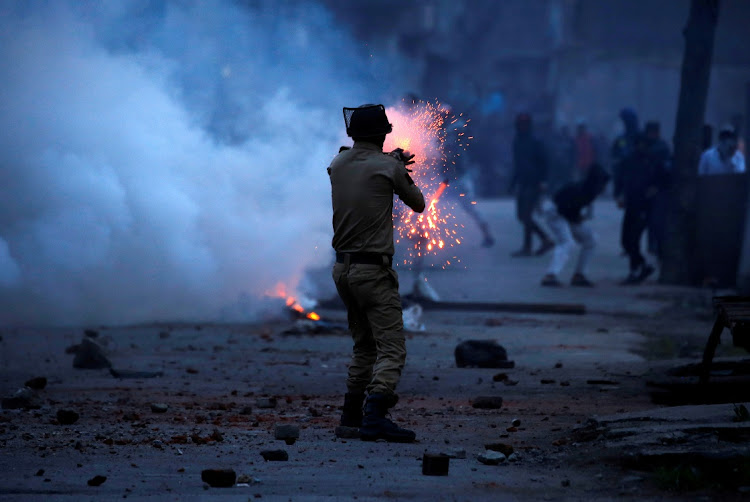 An Indian police officer fires a teargas shell towards demonstrators during a protest in Kashmir, in Srinagar, May 8 2018. Picture: REUTERS/DANISH ISMAIL

New Delhi — The militaries of India and Pakistan said in a rare joint statement on Thursday that they had agreed to observe a ceasefire along the disputed border in Kashmir, having exchanged fire hundreds of times in recent months.

The nuclear-armed neighbours signed a ceasefire agreement along the Line of Control (LoC) in the Kashmir region in 2003, but the truce has frayed in recent years and there have been mounting casualties among villagers living close to the de facto border.

“Both sides agreed for strict observance of all agreements, understandings and cease firing along the Line of Control and all other sectors with effect from midnight 24/25 February 2021,” the joint statement said.

The return to a truce was settled by the two armies’ directors-general of military operations (DGsMO).

“In the interest of achieving mutually beneficial and sustainable peace along the borders, the two DGsMO agreed to address each other’s core issues and concerns which have propensity to disturb peace and lead to violence,” the statement said.

There has been a significant increase in ceasefire violations since 2014, leading to nearly 300 civilian fatalities, a source in the Pakistan military said.

“In just two months this year, there have been 253 ceasefire violations in which eight civilians were wounded,” the source said.

Since the start of the year, India had counted 591 violations by Pakistan.

Kashmir has long been a flashpoint between the neighbours, which claim the region in full but rule only parts. But tensions were renewed after New Delhi withdrew the autonomy of Jammu and Kashmir state in August 2019 and split it into two federally administered territories.

“We are cautiously optimistic that the violence levels and tensions along the LoC will come down,” an Indian official in New Delhi said, declining to be named because of the sensitivity of the matter.

India’s military would maintain deployments along the LoC to prevent infiltration and continue counterinsurgency operations in the Kashmir valley, the official said.

Politicians in Indian Kashmir said they welcomed the commitment to return to a ceasefire, one of the few signs of co-operation in recent years between the neighbours who have fought three full-scale wars since gaining independence in 1947.

“Dialogue is the only way forward if both countries want to stop the unending cycle of violence & bloodshed across the borders and J&K,” Kashmiri politician Mehbooba Mufti said in a tweet, referring to Jammu and Kashmir.

Extreme weather, Covid-19 and politics make it difficult for the agricultural sector to operate normally
World
6 months ago
Next Article