‘Shooting at a peaceful protester with real bullets is such an unforgivable thing in our society,’ said a doctor who treated her 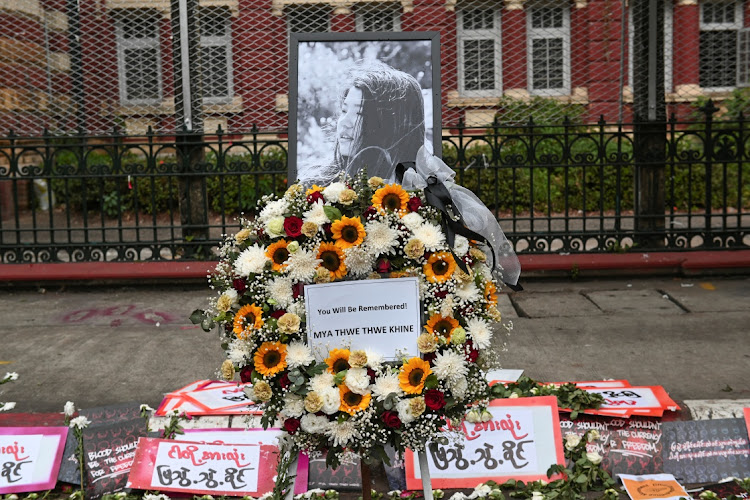 A memorial for Mya Thwate Thwate Khaing, a teenager who was shot in the head when police cracked down on a protest against the military coup in Naypyitaw is seen in Yangon, Myanmar, on February 18, 2021. Picture: REUTERS/STRINGER

Mya Thwate Thwate Khaing became a rallying point for hundreds of thousands of demonstrators in towns and cities across Myanmar, when video of her being shot in the head by security forces while protesting against a military coup went viral.

Mya Thwate Thwate Khaing died on Friday while in intensive care at a hospital in the capital Naypyitaw, where she had been on life support for 10 days since she was shot by police cracking down on demonstrators.

The first known serious casualty of Myanmar’s biggest protests in over a decade had stirred anger across the country, adding to the growing fury over the military’s February 1 overthrow of Aung San Suu Kyi’s government, three months after her party won a second successive election in a landslide.

“I feel really sad about her. I am more determined to come out on street,” said Nay Lin Htet at a protest in the commercial hub Yangon.

“I feel proud of her and I will come to the streets until we achieve our goal for her. I have no concern for my security.”

Many members of the anti-coup movement that has rallied for two weeks across Myanmar are of the same Generation Z as Mya Thwate Thwate Khaing, a grocery store worker who was a teenager when she was shot, and turned 20 while in intensive care.

The shooting triggered memories of the bloody suppression of uprisings against a half-century of brutal military rule, in which thousands were killed and many more thrown in jail for years.

She is one of two reported deaths associated with the protest movement, the other a policeman who the military said died of injuries sustained on Monday.

Within hours of her shooting, videos and images went viral on social media of the moment Mya Thwate Thwate Khaing, wearing a motorcycle helmet and red T-shirt, slumped to the ground with her back turned to the police, who doused crowds with water cannon.

In the days that followed, protesters marched holding aloft pictures of her, with placards calling for an end to dictatorship.

The day after her shooting, they hung the first of several huge portraits of her from a bridge in downtown Yangon, with a banner that read: “Lets together oppose the dictator who kills the people”.

“Shooting at a peaceful protester with real bullets is such an unforgivable thing in our society,” said a doctor who was part of the team that gave her initial treatment, responding to her death.

The doctor, who asked to remain anonymous due to safety fears, said Mya Thwate Thwate Khaing's story had given impetus to a civil disobedience movement in Myanmar, which medical personnel have been a central part of.

Last week, her brother, Ye Htut Aung, had recounted how his sister, who voted for the first time in the November election, had been determined to go to the capital to join the demonstration, and knew police were carrying guns.

He confirmed she had died at about 11am local time on Friday while on life support.

“I feel really sad and have nothing to say,” he said. “I am thankful for all of those who have been praying for her.”

President Cyril Ramaphosa among the first to be vaccinated in SA, Jacob Zuma defies a Constitutional Court order, cold snaps cripple parts of the US ...
Life
2 months ago

Tens of thousands gather across the country to protest the coup, vowing to never back down, as UN worries about violence grow
World
2 months ago